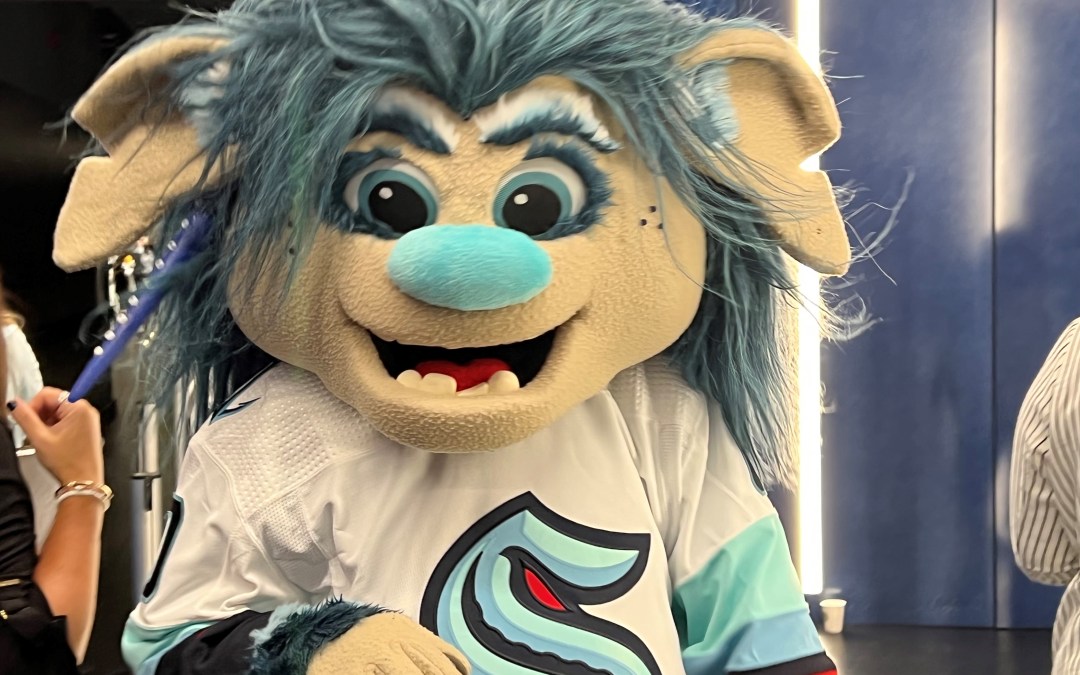 This preseason had already been surprisingly fun for Seattle Kraken fans, but Saturday’s game was downright memorable. Not only did the Kraken beat the Canucks 4-0 at Climate Pledge Arena to improve to 4-0-0 in their four meaningless games so far, but they also introduced their (apparently polarizing) mascot, Buoy, to the world.

We want to go on record right here and right now to make it known that Sound Of Hockey is whole-heartedly pro-Buoy. We will not stand for any Buoy-related slander, so don’t even come in here with that nonsense.

As long as we’re aligned, let’s get to our Three Takeaways from Saturday’s preseason Kraken win.

Don’t worry, we’ll talk about actual hockey in the other two Takeaways, but we do feel it important to discuss Buoy’s first night on the job. The troll—said to be the nephew of the famed “Fremont Troll”—arrived by rappelling from the rafters during a pre-game ceremony.

Once detached from his tether, Buoy waved a massive Kraken flag, then gave fist bumps to the Kraken players as they came onto the ice.

He’s certainly a colorful character, with flowing blue locks, a removable tooth, a tentacle in his hair, and an anchor earring. He has impressive dance moves and received good engagement from the crowd whenever he was visible in the arena.

“I hadn’t seen him, so I was kind of shocked walking out,” Alex Wennberg said. “But I mean, obviously it’s a lot of fun. I feel like that’s just great to come out and give you some extra boost and atmosphere, so it was great to see him as well.”

Buoy did have a couple small hiccups on the night. First, when he was refereeing for the children’s shootout during intermission, his very slippery troll feet betrayed him, and he found himself on his backside. Then, after being asked by in-arena host Angelica Salem to show off his dance moves on the Jumbotrons, Buoy did a half split but lost his balance when standing back up. He nearly took down the whole backdrop on “the Deck,” as it’s called, but gathered himself before causing any damage.

Even with the small blunders, it was a good debut overall for the new Kraken mascot. Now, the team just needs to get that troll some skates!

Ok, now some hockey talk. The Kraken dressed the most NHL-ready lineup we’ve seen so far in this preseason, with only a few regulars missing. With that veteran-laden roster came four new forward line combinations, highlighted by a Jared McCann/Matty Beniers/Andre Burakovsky line and a Yanni Gourde/Alex Wennberg/Oliver Bjorkstrand line.

Burakovsky set up Beniers for his second banger preseason goal in as many outings to get the scoring started 6:42 into the second period.

But the Wennberg line looked especially dynamic and produced the other three goals on the night. Less than a minute into the third, Bjorkstrand won a puck battle behind the net and fed Wennberg in front for an easy goal.

Six minutes later, Wennberg paid it forward to Gourde, who showed his impressive puck skills to beat Thatcher Demko over the blocker.

While it’s a new trio for the Kraken, there is familiarity there. Wennberg and Gourde know each other’s habits from last season, and Wennberg also spent several years in Columbus with Bjorkstrand.

“I’ve played with both of them, so I had the advantage,” Wennberg said. “Gourdie is just great to have out there. I mean, he’s working hard, he’s skilled with the puck. You see on the breakaway he had, he has some really silky mitts right there. And then Bjorkstrand is just— I mean, he can pass the puck, but he’s a shooter as well.”

The feeling was mutual for Bjorkstrand. “For me, [Wennberg] is familiar, so I know how he plays, so that felt kind of natural,” he said. “I think with [Gourde], I like his game. He plays really hard, he’s always on top, and I think when he has the puck, he makes smart plays.”

There were a couple key players missing against the Canucks, including Jaden Schwartz and Jordan Eberle. So, it will be interesting to see if coach Dave Hakstol keeps any of Saturday’s lines together when he has all his veterans playing.

Takeaway #3: Philipp Grubauer is having a solid camp

Entering Seattle’s inaugural season, goaltending was supposed to be one of the team’s strengths. But Philipp Grubauer and Chris Driedger both had shaky moments in preseason, and that carried into the regular season.

The netminding tandem will look different this season, with Martin Jones as the likeliest backup to Grubauer, at least until Driedger recovers from offseason surgery to repair a torn ACL. To be successful, the Kraken will need marked improvement in this area, especially from Grubauer.

After a game and a half of preseason action, Grubauer has not given up a goal. We don’t want to read too much into preseason results, but it is definitely a positive sign that he appears confident and comfortable in the Kraken net so far. He stopped 10 out of 10 shots in just under 31 minutes against the Flames on Tuesday, then went the distance against Vancouver on Saturday and turned away all 17 of the shots he faced.

“Tonight is a difficult game for a goaltender to play,” Hakstol said, referring to the several long stretches in which Grubauer did not face many shots. “You know, Grubi had two real good saves at 1-0, that for me, those are— that’s a goaltender doing his job and doing it well.”

Grubauer’s best save of the night came in the second period when he tracked a puck across the top of the crease and extended his left leg to rob Tyler Myers, who was standing on the doorstep.

“There’s two backdoor saves that he was part of at 1-0,” Hakstol said. “We got pretty scrambly as soon as we scored our first goal. The next 12 or 13 minutes of that period, you know, we got back on our heels, and we stopped doing things the right way, and at 1-0, the goaltender makes a couple of saves like that, you know, those are game-changing-type saves.”

If the improvements to the team’s roster pan out the way we think they will, and Grubauer can go back to being the Grubauer he was with the Avalanche, this team will be tough to beat this year.

The Kraken have two preseason games remaining, Monday in Edmonton and Friday in Calgary. Their first regular-season game will be Oct. 12 in Anaheim.