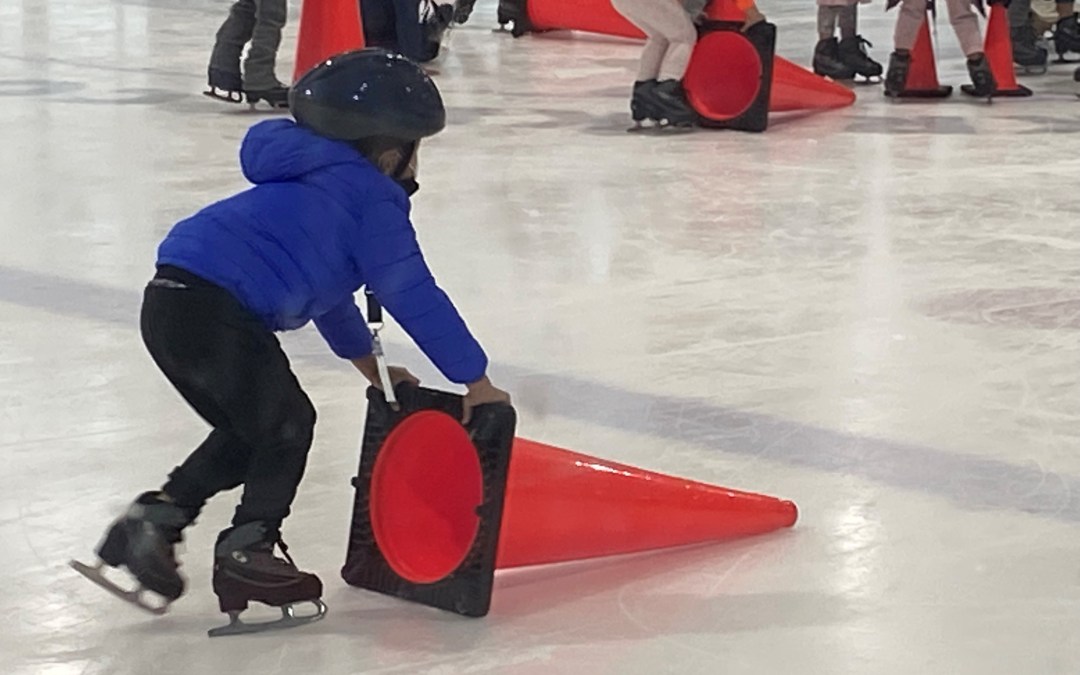 SEATTLE — A quiet Wednesday morning at the Kraken Community Iceplex is given noisy life as 60 children bound through the front door with squeals of joy, anticipation, and excitement. The children sit on benches patiently as their teachers and chaperones lace skates to their feet. They are escorted out to the ice where they grip orange cones, many apprehensive about letting their skates touch the ice.

It is the first day on the ice for the kids, many of whom have never been inside an ice rink before.

Wednesday was day one of a learn to skate program for children whose families participate in early learning centers with the Refugee Women’s Alliance (ReWA) and the Kraken’s One Roof Foundation. It’s the second year of the program that runs for 32 weeks. At the end of the on-ice session, the same children who dared not to let go of the cones on the ice in the beginning were flying around it.

“The children are working individually to build their confidence but also working as a team,” Susan Lee, ReWA operations director for early learning centers said. “They know that when they fall down, they will get up and somebody is going to give them a hand. But they can also do it themselves, and that’s something that a parent had shared with me on their first day last year.”

ReWA has been serving the local community for the past 35 years and is nationally renowned for its work with refugee and immigrant women and their families, taking a holistic approach to promote integration and self-sufficiency. The goal is to quickly and effectively stabilize clients, promote acculturation, increase language proficiency, and improve employability.

The learn to play clinics are part of that goal as well as opening access to children who might not otherwise feel welcome on the ice.

“We wanted to remove barriers to entry of the sport of ice hockey and to ice skating, and transportation is a huge barrier,” Kraken community engagements and youth access specialist Andrew Bloom said. “We found this group that we could work with, to bring the kids here to the Iceplex and remove that transportation barrier on top of the cost barrier. This is a very diverse group of kids and having them start at such a young age, they’re going to have the same advantage as any other kid.”

On the ice, the four- and five-year-old’s participating go through the trials of learning to skate. That includes pushing objects down the ice like giant cones, chairs, and plastic seals.

There is also the expected falls, but they get up every time, and the one constant among the diverse group is the smiles and laughter.

“I can speak on behalf of the families and the children that this is an amazing opportunity to really bridge the gap of equity and accessibility in early learning,” Lee said. “Especially for ice skating, and hockey, which is a really expensive sport. This is ensuring that our early learners, who I would say about 95 percent are low-income families, children of color, families of color are now able to have a foundation for future growth and this really opens their eyes as well for endless possibilities. These are future Olympians and hockey players.”

The Kraken skills coaches and youth hockey coaches help the on-ice instruction. ReWA serves families who speak up to 60 different languages, but a common language of ice skating becomes the norm for the kids.

Near the end of Wednesday’s sessions, the Kraken mascot, Buoy, took the ice to the delight of the skaters who mobbed the mascot and posed for a group photo before they shuffled off the ice with just as much excitement as when they took to the ice 45 minutes earlier.

Hockey is the Kraken’s main business, but that’s not the ultimate point of the learn-to-skate partnership with ReWA.

“It’s learn to skate first,” Bloom said. “We definitely introduce hockey after they get comfortable on the ice. In the coming weeks we’ll introduce hockey sticks and do a little learn to play hockey for free type of event and just get them exposed to it.”

Whether the kids move on to hockey or into figure skating and other skating sports is irrelevant. The benefits go beyond the ice and sport.

It’s not only fun but helping in these young children’s development.

“It’s about social and emotional skills,” Lee said pointing to a young girl skating a chair around the ice. “It’s about their physical skill as well gross motor skills, their fine motor skills and cognitive as well. All of these are in place as the children are learning. For example, this little girl, she’s coordinating her skates and her skating, right? But it’s using her audio and her visual, gross motor skills, and learning from one another through modeling.

So, there’s a lot of learning. Yes, you’re having fun, but there’s a tremendous amount of learning. These kids here, they’re all from different countries, different cultures and this is really exposing them to something that is tangible.”

Watching from just outside the glass were the parents, armed with cell phones to record the memories through picture and video.

The smiles outside the rink were just as plentiful as the kids on the ice.

In the build up of the Kraken becoming an official NHL team, executives from the franchise to be spoke a lot about the importance of being more than just a hockey team. They wanted to be a community partner, and a partnership such as the one with ReWA is proving it wasn’t just lip service.

“As an immigrant child myself, this would have been something that I wish I had,” Lee said. “This is a dream come true for me to be able to see 60 of my kids in our programming, having this ability, this accessibility, to enjoy themselves and not think about the disparity and where they come from. This allows them a space to really express themselves. It gives me hope that corporations such as the Kraken can think about investing in the future of early learning. I’m grateful, I’m very hopeful, and I hope that other professional sports team will follow their example.”