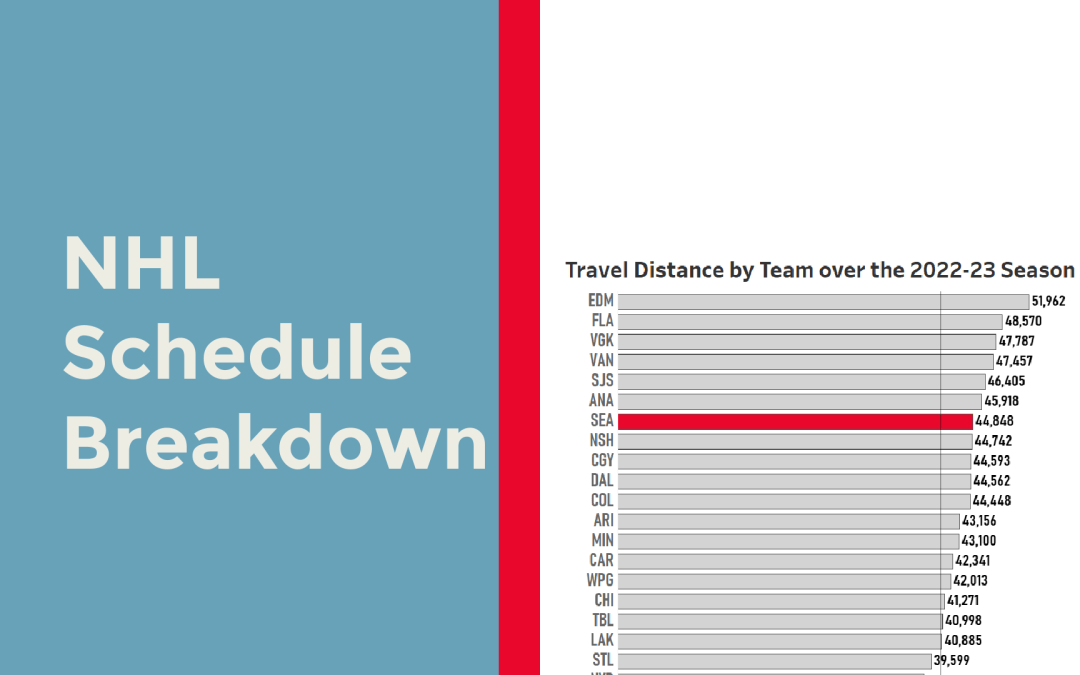 With the kickoff of the NHL season this week, it is a good time to breakdown the 2022-23 schedule. Here, we drill into who is logging the most frequent flier miles, which teams have the most back-to-back games, and which teams will appear on the most national television games.

Comparing 2021-22 to 2022-23 is not a fair comparable due to the impacts COVID had on the schedule, with several games being postponed and rescheduled throughout the season. If you were to compare this year’s schedule to last year’s planned schedule, though, the median travel for last year would have been slightly less due to the condensed nature of last season.

Here is how travel distances for the 2022-23 season stacks up by team.

The Pacific Division teams tend to have the most travel miles in a season, so it is no surprise to see those teams around the top. The Florida Panthers are the only non-Pacific team in the top seven this season.

Here is how the travel miles split out by division.

Based on that perspective, the schedule looks encouraging for Seattle, considering the Kraken will travel less than five division rivals.

Travel distance is one aspect of evaluating the challenges of a team’s schedule, but the quantity of road trips is another variable to consider. Here is the breakdown of the number of road trips by team.

The Kraken are tied for having the third fewest road trips this year. Here is how their road trip and homestands break down throughout the year.

Of course, having fewer road trips also means longer trips at times, so is that better for Seattle? That’s hard to say.

It is nice to see the Kraken will play the second fewest back-to-back games in 2022-23.

While we are talking about schedules, let us take a quick peek at the NHL national TV schedule for this year.

As the graph shows, there are plans for 14 more nationally televised NHL games this season than there were last season. Note that the 2021-22 numbers were based on preseason reported schedule that was eventually impacted by COVID cancelations and rescheduled games.

Here is how this season breaks down by network.

TNT, which has the rights to broadcast the Stanley Cup Final this season, added 12 more games compared to last season. ESPN added 10 more games to the flagship network and five games to ABC. The ESPN+/Hulu exclusive scheduled games are down to 53 from 75 in 2021-22.

The real season begins this week. Enjoy the games!