From pre-game show to beer options, the Kraken arena experience will be quite different this season 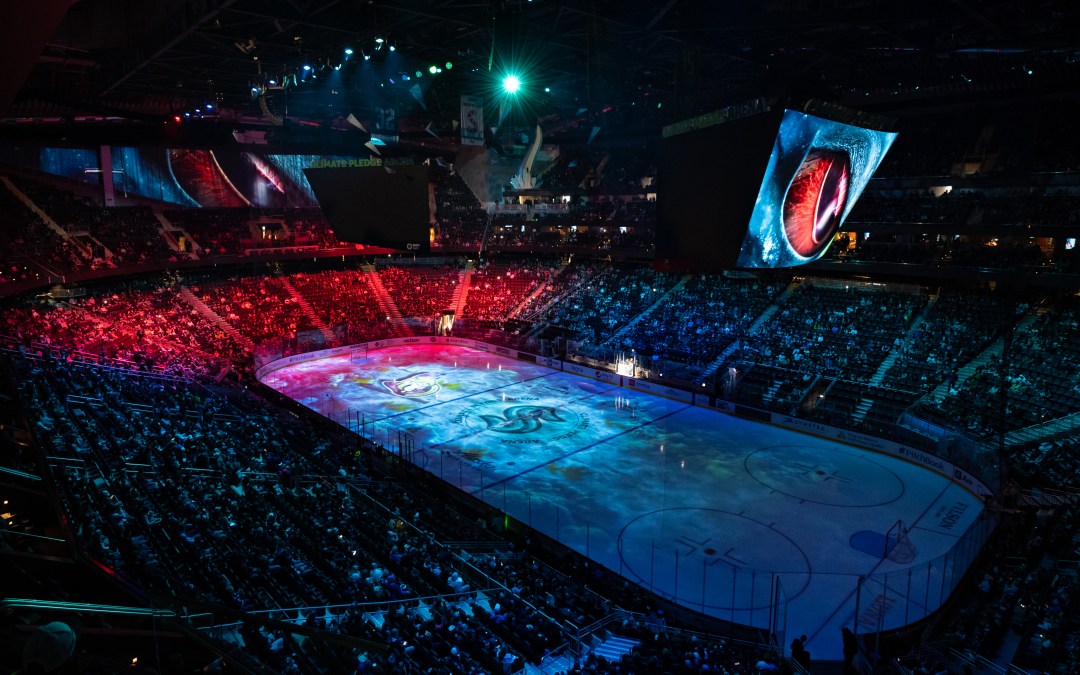 The second season in the history of Seattle Kraken hockey has arrived, and with that comes a new opportunity for the organization to dazzle its fans at home games. With COVID protocols now seemingly a thing of the past, a full season at Climate Pledge Arena under the belt, and a lot of the kinks of being a completely new franchise worked out, Seattle has a lot of new tricks up its sleeve for 2022-23.

We spoke with Kraken senior vice president of marketing, Katie Townsend, about some of the updates fans can expect.

“One thing we spent a lot of the offseason doing was listening,” Townsend said. “We heard from casual fans, season ticket members, people like [Sound Of Hockey] who are there every game. We did the same with our investor group and some of our corporate partners. And then we took all of that in May and June, and we were like, ‘Ok, what are the consistent findings, and now how do we act on them?’”

Here is what the organization has in store.

There will be a new pre-game show with new video, new ice projections, and new music. The updated show will also allot for 20-30 seconds of video focusing on a different individual player for each game. This will keep things a bit fresher than the show last year, which—although spectacular—did get repetitive by the end of the season. In all, there will be 25 different versions of the open, and Townsend says there are a lot of Easter eggs, which should make for new discoveries every time fans see the show.

Townsend says the new show, “Combines the story of our fans—you know, [fans] who, from Day 1—kind of embarked on this pretty brave journey to be like, ‘Yep, we’re gonna back this,’ with the idea of our players coming together, and then everyone together embodying the spirit of the Kraken.”

If you’re wondering about the neon tentacle that gets lowered from the rafters to mark the Kraken players’ entrance to the ice, it will still be used this season, but it will “appear in a slightly different way.”

“Hoist Your Colors,” an all new pre-third-period show

There will also be a new pre-third-period intro called “Hoist Your Colors.” The Kraken partnered with Bellingham’s famous electronic dance duo, Odesza, and filmed video all across Washington for this portion of the in-game presentation. During “Hoist Your Colors,” a large flag will be raised in the arena. “It combines that kind of nautical theme with the Pacific Northwest and with the Kraken.”

There will be several changes to the music heard by fans in the arena throughout a game night. From the jump, more consistent voices will be heard singing the national anthems.

“We heard that people generally like consistent anthem singers, so we did anthem auditions,” Townsend said. “So, we have Madison Stoneman and Tommie Burton will rotate throughout the games, and then hype nights and specialty nights, we’ll still have [other] people come in.”

During pre-game and intermissions, house bands were a popular and Seattle-centric touch in the inaugural season. House bands will be back this season, but in response to fans wanting to get to know more about the bands that were playing, the Kraken will move from one-off performances to a “residency program.” With this program, each band will play four or five games in a row, assuming the scheduling works out for that band. The first act to be featured will be King Youngblood, a Seattle-based alt-rock band.

Additionally, be on the lookout for a new Kraken-employed marching band debuting at Saturday’s home opener called “Red Alert,” named for the color of the eye in Seattle’s logo. The band will perform brief pre-game concerts at Seattle Center Armory, the plaza in front of Climate Pledge Arena, Alaska Airlines Atrium inside the arena, and then in different places in the concourses during games.

There will be bespoke Kraken-themed sea shanty music videos (perhaps featuring cameos by a few members of Sound Of Hockey?) with famed shanty singer David Coffin coming later in the season. Fans will also hear a new organist, Ben Wooley, tickling the keys for most games, though Rod Masters will still make some appearances.

Fans let the Kraken organization know they wanted to receive more free stuff on game nights. High on the list of most desired swag was bobblehead dolls, which the team was not able to give out in its inaugural season. “Bobbleheads take around four months to make,” Townsend explained. “So, for us last year, when we found out the team, when we found out the roster, and then not knowing who’s going to emerge as a star and a fan favorite, it wasn’t really an option for us.”

This season, in addition to a whole host of other giveaways, the team will have five bobblehead nights. Of the five, which will feature Yanni Gourde, Adam Larsson, Matty Beniers, Brandon Tanev, and Jordan Eberle, Townsend said her personal favorite is that of Larsson. Asked if the Larsson bobblehead will sport the defenseman’s trademark deep v-neck under shirt, Townsend said, “Maybe.”

The ceremonial yeeting of the plush salmon that became so popular during post-win “Three Stars” announcements last season will live on in 2022-23. But there will be a new fish thrown by the players.

This season, the Kraken worked with the Bristol Bay Native Corporation to develop the stuffed salmon. Now, it will be an Alaskan pink salmon, which is a smaller species and the most abundant of North America’s salmon species.

There is also hope the game ops department can find a way to get those salmon delivered deeper into the crowd, as most fish seemed to land within a couple rows of the glass last season.

Buoy, the team’s new troll mascot, has been very visible since he was introduced to the world on Oct. 2. He’s been at the Stocker Farms corn maze and Pike Place Market, he’s been doing school visits and other community engagement initiatives, and there’s a lot more to come on that front.

As for what Buoy will do during games, Townsend says we have only caught a glimpse of his antics. “Buoy will have different intermissions and different skits at TV timeouts that he will be doing, so [we are] working on those at the moment.”

Townsend also re-confirmed that Buoy will be able to skate on the ice during intermissions, and that there will be a new, larger t-shirt cannon utilized this season. The cannon Buoy used during his one preseason appearance was the smaller of the t-shirt cannons in the team’s t-shirt-launching arsenal.

The price of beer inside Climate Pledge Arena was an unsurprisingly hot topic with fans last season. “We heard from fans,” Townsend said. “Lower-priced beers, but larger quantity. So, we’re introducing a $9.99 Miller High Life 16-ounce can, and then a $9.99 rotating craft beer, 16-ounce as well.” Bigger beers for less money is certainly something that we at Sound Of Hockey can get behind.

The new in-game beer offerings will be available at several locations throughout the arena, so these lower-priced options will not be difficult to locate.

Fans arriving early for weekend home games can also enjoy a cold college soda at a new Modelo-sponsored pre-game beer garden, which will be located inside the Seattle Center Armory.

There will be several new menu items available for purchase inside the arena, including a salmon chowder sourdough bowl, more options from Impossible Foods, and additional selections like a brisket sandwich at Mercer Street Mac & BBQ. More adventurous fans can also look forward to a special new offering; the peanut butter and jelly corndog.

Perhaps most notably, Lil Woody’s Burgers & Shakes is being replaced with Molly D Burgers. Named for Climate Pledge Arena’s executive chef, Molly Demers, Molly D Burgers will be its own concession stand, and the specialty burger there will be the quarter-pound Royal Ranch beef patty topped with cheddar, pickles, onion, and a secret sauce.

The team also hopes to help fans navigate more easily to the various food and beverage offerings. “One thing we learned is [we need] better maps,” Townsend said. “We’re going to try that on the [Kraken + Climate Pledge Arena mobile] app and around the arena so that people— we heard from some fans, like, ‘I only see the food options that are around me.’ And so, I think what I would encourage people to do is to look at that map and to go and explore the arena.”

Speaking of the Kraken + Climate Pledge Arena app, there will be updates to that this season too, as it will be more Kraken-focused than before. Last season, the app was designed with Climate Pledge Arena as the center of attention, with some Kraken info mixed in. This season, it will be a lot more Kraken centric and will also allow fans to stream live radio broadcasts of games in real time.

After receiving feedback about parking spaces being too tight at the arena garage, some spaces are being re-striped to make them wider. The team is also now partnered with a new garage in Pacific Place, which will be cheaper than garages around Climate Pledge Arena. Pacific Place is located downtown, but fans can park there and hop on the monorail to get to the game.

Additionally, there is a new option to valet bicycles, scooters, skateboards, and other personal forms of transportation right at the arena, and the popular free transit program for ticketholders is still available and redeemable through the mobile app.

A new “Heroes of the Deep” program was introduced during preseason, which will award $32,000 to charity at every single home game. “[It’s a] huge commitment on behalf of the ownership group, so people should look out for those stories, and also, if they have people that they want to nominate, they 100 percent should do that,” implored Townsend.

Finally, there is a new 50/50 raffle that was tested in preseason. Fans can buy tickets from raffle sellers around the concourses. One winner will take home half of each night’s pot, while the other half of the proceeds will benefit the One Roof Foundation.

The Kraken kick off their season Wednesday in Anaheim at 7PM Pacific. Their first home game, where many of these new endeavors will officially debut, will be Saturday at 7PM against the Vegas Golden Knights.