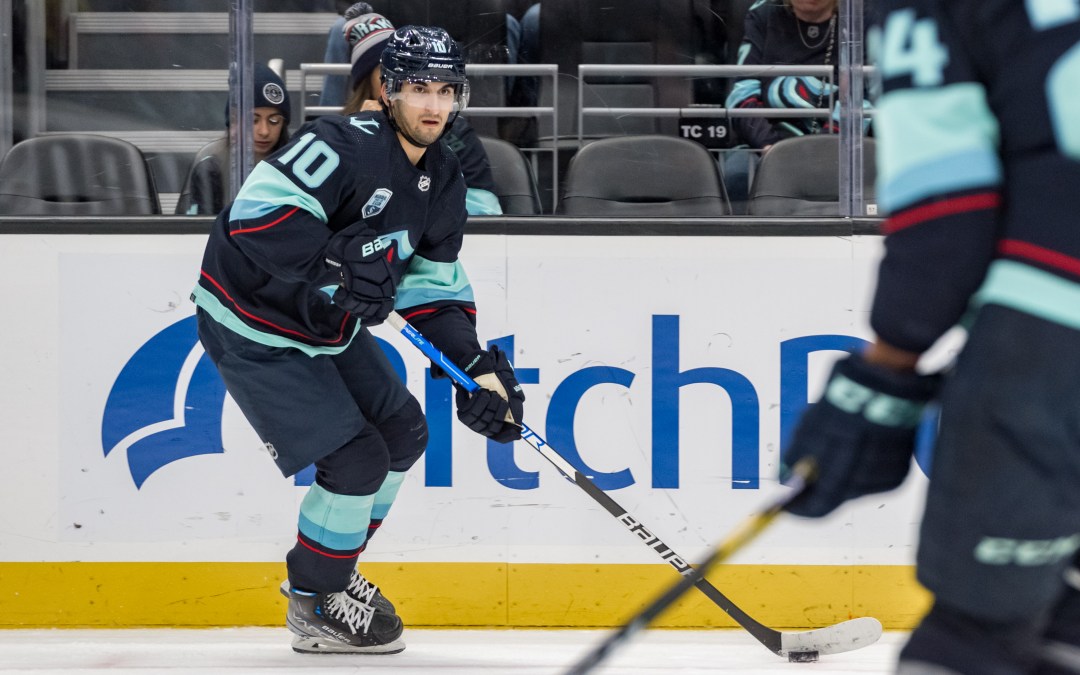 If we told Kraken fans a few days ago that Seattle would take three points out of four from this two-game trip with back-to-backs, we surmise that most of those fans would have been quite excited about that predicted outcome.

Wednesday’s 5-4 overtime loss in Anaheim may have left a bitter taste due to the nature of the loss, but Seattle did everything it could to erase that from memory Thursday. From top to bottom, the 4-1 Kraken win over the Los Angeles Kings was a solid, convincing performance, and one that should bring optimism to the Puget Sound area.

“You learn from your mistakes,” Alex Wennberg said. “That just shows right now, I feel like this group is just getting together, and more and more it shows on the ice that we’re more connected.”

Here are our Three Takeaways from the first Kraken win of the season.

Takeaway #1: Kraken learning on the fly

On Wednesday, the Kraken—holding a 3-1 lead—took a penalty late in the second period. After an offensive odd-man rush, they turned the puck over to the Ducks, which led to a rush and a power-play goal the other way. That gave life to Anaheim as the teams headed to the dressing rooms and was a huge turning point.

On Thursday, the Kraken—holding a 3-1 lead—took a penalty late in the second period. After an offensive odd-man rush, they… did NOT turn the puck over to the Kings. Instead, Karson Kuhlman was allowed to go in alone and take his shot, while the other three killers stayed above the puck this time. The result was a solid kill and a team heading confidently into the room, holding a two-goal lead after 40 minutes.

“I loved the room after the second,” coach Dave Hakstol said. “When guys are talking about the right things, it doesn’t mean it’s always going to go the right way, but they were relaxed.”

Hakstol denied having any sense of deja vu, but watching the two games, it was impossible not to draw parallels between the contests.

“You can’t really think about that too much,” Wennberg said, recognizing the similarities in the situations. “I feel like today we just maybe played it a little bit smarter than we did last night, and I mean, obviously it worked out, so maybe we look at this tape and see some good things from it.”

Jones, who watched Wednesday’s game from the bench, liked what he saw from the goal crease Thursday. “It was a lot better tonight,” he said. “Last night, we had some issues [holding the lead], but I thought tonight we were really strong. We checked hard, I thought we supported the puck really well, and it helped on our breakout.”

If the Kraken can replicate Thursday’s effort over and over this season, they should be a very fun team to watch. They did a lot of good things in all three zones and held what should be a solid Kings team mostly at bay.

Jones was impressive in his first start as a Kraken. Making 26 of 27 saves, he never looked under duress. Some of that is thanks to staunch defensive play in front of him, but some of that is also Jones reading the play well and always being in position.

“Good night for Jonesy tonight,” Hakstol said. “He was very calm in there. He didn’t have a lot of work in the first period, but second period, a little more action around him.” The Seattle coach recalled a specific cross-ice save Jones made on Arthur Kaliyev and said, “Saves like that give a little life and a little bit of confidence for the bench, for sure.”

Meanwhile, Schwartz and Tanev, two players who have just returned from season-ending injuries in 2021-22, have quickly made an impact. Schwartz set up the Beniers goal on Wednesday by driving hard to the front of the net, and he scored a power-play goal of his own Thursday, cleaning up a Jordan Eberle rebound.

Schwartz had another minor injury in training camp that caused concern he could miss the beginning of the season. But he has shown no ill effects from that or from last year’s major injury and has been a key piece of Seattle’s offense through two games.

Tanev, who individually makes Seattle look faster and more energetic, scored the eventual game winner at 6:08 of the second period Thursday. He took an indirect pass off the wall from Will Borgen in the corner, drove to the net, and jammed the puck up and over Jonathan Quick.

“That put us ahead and let us play with a lead on back-to-back nights, so that’s important,” Hakstol said. “Guys like him and Schwartzy who can play in small areas are important.”

It is very refreshing to have those two key players back in the lineup.

Matty Beniers is making it harder and harder to temper expectations for his 19-year-old season. With his assist on Wennberg’s goal, he now has 12 points in 12 NHL games, and that’s after he had a goal negated Thursday due to a very close high-stick call.

“He’s unbelievable,” Wennberg said. “You see on [my] goal, he’s patient, he’s holding on to [the puck] to create space for me down low. And I mean, it looks easy, but for players out there, it takes a lot of skill to do that.”

It’s encouraging to see his usage so high, as well. Hakstol is deploying Beniers as a top-line center and on the right half wall on the power play. Beniers has rewarded his coach for the trust, producing consistently while playing responsibly at the defensive end of the ice.

It’s also encouraging when a veteran gives genuine praise to a rookie because players always know top-end talent when they see it. “He’s been in the league for— what is it, 12 games?” Wennberg said. “But he looks like he’s played in it for 10 years. It’s really impressive, and he could be a hell of a lot fun to follow this year, for sure.”

Shane Wright was scratched against the Kings Thursday after playing just 6:14 Wednesday. Hakstol downplayed the decision, saying Wright played a good game in his NHL debut and indicating he simply wanted to get Morgan Geekie back in on Thursday.