The unwritten rules of the no-helmet warmup in the NHL 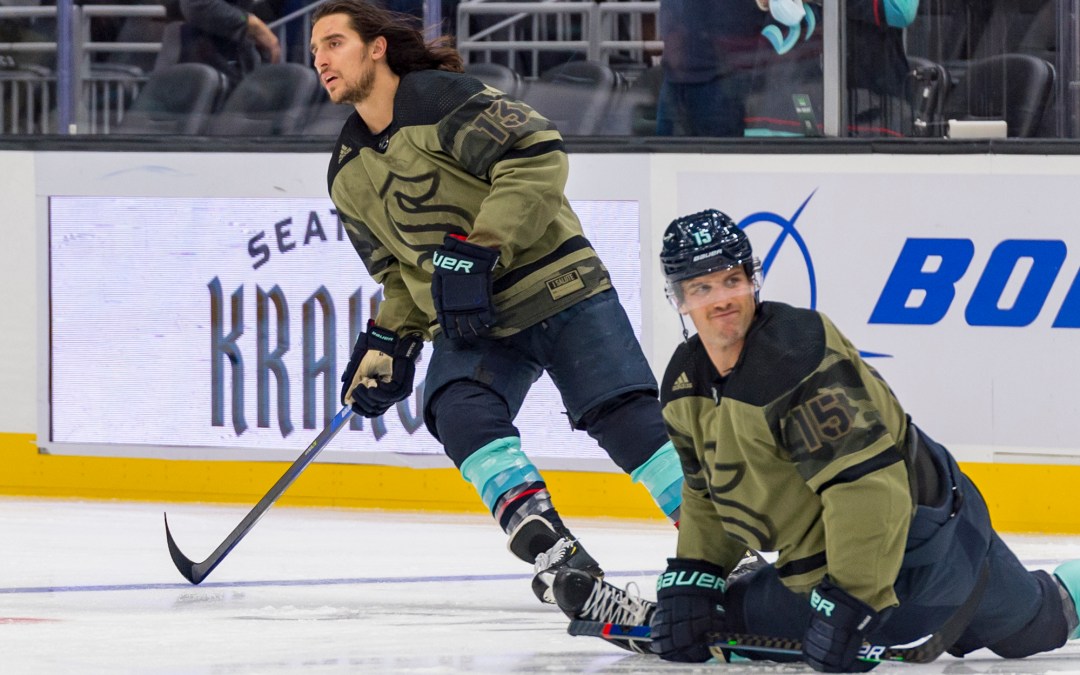 Teams across the National Hockey League have exclusive clubs embedded within them. The privilege of joining those clubs requires a level of tenure, panache, and… well… hair product.

Curious about the unwritten rules of ditching the helmet in warmups, we asked the members of the Seattle Kraken chapter of the No-Bucket Warmer-Upper Club (that’s what we call it here at Sound Of Hockey) how they decide whether to protect their noggins or let the locks flow. Their answers taught us a lot and gave us some good laughs along the way.

Here’s what we learned about the longstanding NHL tradition of the bucketless warmup.

It’s all about the hair, for most

Vince Dunn and Adam Larsson—two frequent but not entirely consistent members of the NBWUC—shared similar sentiments about deciding whether to don a helmet or not. For the defensive partners, it’s actually quite simple.

“For me, it’s how good my hair looks,” Larsson said.

Brandon Tanev is the most committed member of the club and one of the Seattle chapter’s founding members. We can’t recall a time when we’ve seen him wear a helmet in warmups. In fact, in a game early last season, he took a puck to the forehead and hustled off the ice to get stitched up before the opening face-off. The following game, he was right back out there without a helmet, forehead stitches and all.

Tanev, coincidentally, has perhaps the best flow on the team. But he says it isn’t so much about letting his hair down, rather a privilege that comes with tenure and experience. “The more games you play in the league, you’re able to do it, so you do it.” Fair enough.

Alex Wennberg’s approach is a bit more nuanced. “The warmup is to get prepared mentally,” he said. “It still doesn’t change the way you play at all, so every now and then you switch it up. And I mean, sometimes— it’s not like you’re superstitious, but sometimes it feels like the routines are working and sometimes you want to switch it up.”

As Larsson and Dunn suggested there are external factors to consider, namely what hair products are available to the players on a given night. Larsson, for example, says he doesn’t travel with product, so what he uses is reliant upon what is provided in the locker room. If there’s no gel to give him the “wet look” that he prefers, you better believe he’s wearing a helmet that night.

Dunn also noted that Larsson’s gameday grooming routine can factor into the Swedish defenseman’s decision. “I know for Lars, if he conditions his hair, he’s probably not going to go no bucket because his hair is too soft; it’s not styled enough.” For the record, Dunn’s product of choice is paste.

And although Wennberg leans on how he’s feeling on a particular night, he too admits product can play a role in the decision. “I will say that if I don’t have any product in the hair, there is no way I’m going out without a bucket.”

The case against joining the NBWUC

Those that are not regular members of the NBWUC have their own reasons to stay helmeted. Morgan Geekie tried it once, but it was under specific circumstances. “My buddy was in town, and he bet me 20 bucks that I wouldn’t do it.” So, that was easy money for Geekie.

The one-time payout wasn’t enough to prod Geekie into the club permanently, though. He says growing up, he thought one of the coolest things about the NHL was seeing guys warm up without helmets on, yet even for him, the decision to typically stay helmeted comes down to follicles. “I don’t have nice enough hair to not wear it,” he said. “Earlier last year, I maybe could have when I had long hair, but Wenny, Tanev, all those guys that do it with no helmet, you can tell there’s a reason why they do it.”

A privilege reserved for veterans

It was borderline shocking to see Shane Wright take his traditional rookie lap Wednesday without a bucket, though that action was likely demanded by Seattle’s veterans to add to the moment. Aside from that situation, in which veterans are mandating a bucketless warmup, it would be unheard of and unacceptable for a rookie to try to join the NBWUC.

To determine when a player can begin shedding his protective lid, Tanev doesn’t have a specific point in mind for when that would be tolerable. “It’s at the discretion of the older guys,” he says. “The older guys when I was playing— when I was younger, you have a certain amount of games, and you’re able to do it, and that’s about it.”

Larsson and Dunn thought the threshold was a bit more cut and dried, putting the minimum for NHL service time at somewhere between 200 and 250 games played.

Wennberg, meanwhile, didn’t try it until he was with the Florida Panthers and playing his 400th career game. “This is just how I came into the league,” he said. “When you’re a rookie or a couple years in, you’re not really going out without a bucket. It feels like more of a veteran thing, and in Columbus we weren’t allowed, so for me, I tried it first in Florida when I had the opportunity.”

A decision rarely discussed in advance

You might think the decision to show the hair would be something that gets discussed nightly by players in the dressing room, but that isn’t the case. It’s typically an under-the-radar, personal decision that is made quietly.

“I’m more of a guy who shows up, and when you walk the line [to go onto the ice] and you don’t wear your bucket, that’s when people will see it,” explained Wennberg. For him, it’s almost like a surprise reveal.

He adds, though, that there are rare occasions when teammates push each other to ditch the dome.

“If a bunch of guys on the team are saying, ‘It’s got to be a no-bucket night for you, your hair’s on point,’ yeah. I get that comment every now and then, but I don’t really spread the word.”