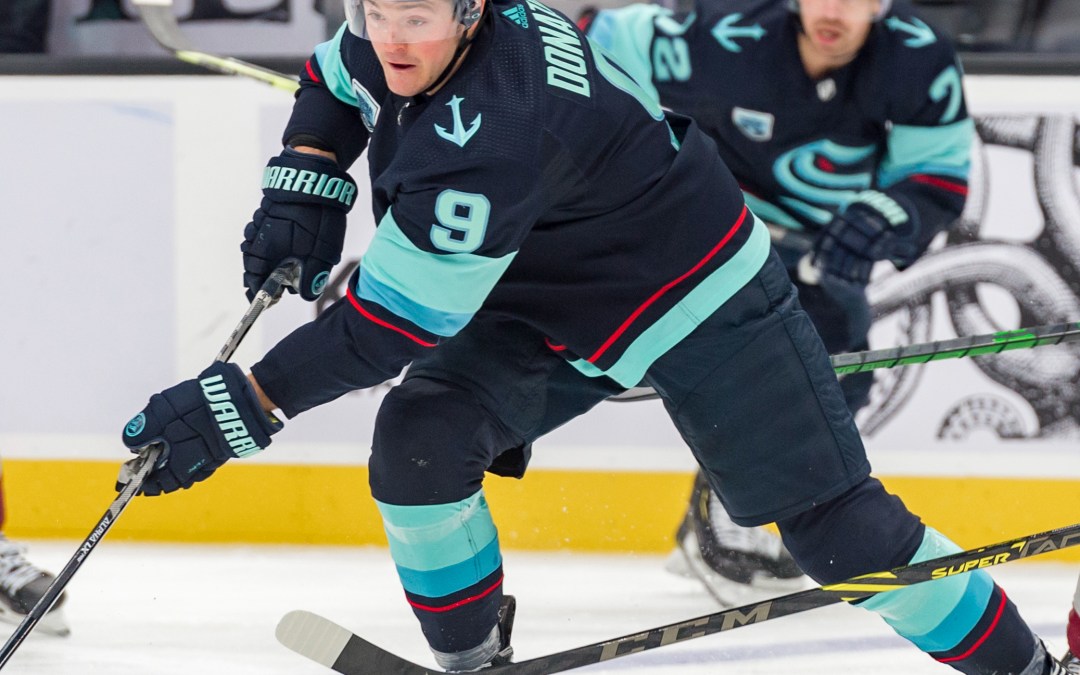 After the way Seattle played in its first two home games Saturday and Monday, having the Kraken of old back against the St. Louis Blues was refreshing. When we say “Kraken of old,” we’re referring to the version we saw last year, the one that would often fall behind in the first period, rally back in the second, and ultimately come up just short in the third and/or overtime.

That’s exactly what happened Wednesday, but salvaging a point against a good Blues team and getting back to their tenacious ways was a positive result for the Kraken.

Here are our Three Takeaways from a 4-3 overtime Kraken loss to the Blues.

Takeaway #1: The boys are back

Kraken fans’ hopes may have been elevated after the first two games in Southern California, contests that Seattle largely dominated. But those hopes came crashing back down to earth when the Kraken laid two consecutive eggs against Vegas and Carolina and lost those first home games of the season by a combined score of 10-3.

The typically raucous crowd inside Climate Pledge Arena was largely silent both nights, and there were early races to the exits upon realization that the games were well out of reach.

On Wednesday, the Kraken got back to showing the identity they worked so hard to develop last season.

“We played a good hockey game,” coach Dave Hakstol said. “There’s two or three minutes in the first period where we gave up a couple of quick ones, but we regained our composure, played a hell of a hockey game.”

Seattle fell behind 3-1 in the first period. Just over a minute after Will Borgen had scored his first goal of the season, Martin Jones made too soft of a pass to Vince Dunn behind the net. Dunn had a chance to pass behind the net to Adam Larsson, but he failed to get it past a forechecking Robert Thomas. That led to Brayden Schenn punching it into an open net.

Then 17 seconds later, after Jordan Eberle had fumbled a puck in the neutral zone, the Blues quickly transitioned and sent Justin Faulk in for his first of two goals on the night (the second was the game winner in overtime).

Even after that first period, though, the effort felt very different than it did against the Golden Knights and Hurricanes.

The Kraken scored two in the second with a breakaway goal by Ryan Donato, created by a fantastic outlet pass from Brandon Tanev, and an own goal by Torey Krug that got credited to Adam Larsson.

After 40 minutes, the Kraken exited the ice to a standing ovation, something they certainly wouldn’t have deserved from the home faithful in the previous two games.

“I thought we played a tired hockey game against Vegas,” Hakstol said. “I don’t like at all the way we played the other night against Carolina and handled things. This is our hockey team tonight; the way we battled, competed, executed, the pace and the tenacity that we played with… Tonight is a good standard to go off of and continue to build from.”

“That just shows the resiliency in this room,” Borgen added. “We never thought we were out of it. We were gonna keep coming at ’em, and we got ourselves back into it a little bit.”

That resiliency has been missing for a couple games, so it’s good to see Seattle can battle back when it gets down.

Now, if only the Kraken could figure out how to get ahead in games…

Takeaway #2: Big games by Ryan Donato and Will Borgen

Donato came off a healthy scratch Monday and—as we saw after he was scratched on several occasions last season—played like he never wants to spend another game in the press box. Not only did he score a big goal off a breakaway, Donato also got into his version of a scrap with Ivan Barbashev in the first period.

Barbashev laid a punishing welcome-to-the-show-type hit on Shane Wright, and Donato, not known for his physical play or feistiness, didn’t think twice about jumping to the rookie’s defense.

“I didn’t really get to see the hit,” Donato said. “I just heard him go down hard, and no matter what, I think any guy would stick up for the teammate if they’re in that position. I happened to be the closest guy to him, and I think it’s a blessing that I didn’t get hurt and he didn’t get hurt.”

Wright was thankful for Donato jumping to his aide and joked after the game that he might owe Donato a dinner for that.

Similarly, Borgen scored a goal of his own and made a huge defensive stop on Jake Neighbours in the third period. On the play, Neighbours kept driving and ran right into Martin Jones, earning himself a goalie interference penalty. Borgen took offense to an opponent touching his goalie, and went right after Neighbours, creating a big skirmish behind the net.

Combining offensive output with solid defensive play and a willingness to stick up for teammates made for a good night for two relatively unsung players.

Hakstol’s lack of usage of No. 4 overall pick Shane Wright was the talk of the town after Seattle’s ugly loss to Carolina Monday. Wright ultimately played similar minutes Wednesday, but he was far more noticeable. After two periods, he was on pace for a higher time-on-ice total, but with the game tied in the third period, Hakstol shortened his bench. Predictably, Wright’s fourth line didn’t get much time in the final 20 minutes. Still, he got credited with his first NHL point and missed scoring his first NHL goal by mere centimeters.

On Donato’s goal, Wright deflected a cross-ice pass in the defensive zone. Tanev scooped up the puck, found Donato behind the Blues’ defense, and hit him with a perfect stretch pass, sending Donato in for the eventual tally.

Wright was not initially credited for the point, though. It got added during the second intermission and announced to a large ovation from the crowd in the third period. He found out that he was on the scoresheet at the same time as everybody else in the building.

“I didn’t know,” Wright said. “I kind of thought on the play that maybe I would have gotten an assist there. I thought I touched the puck but didn’t know in the room until they announced it. So, obviously a pretty cool moment for sure.”

In the third period, Wright found himself with the puck on his stick in a dangerous area after Donato found him from below the goal line. Wright got a good shot off and cleanly beat Jordan Binnington, but he hit the base of the post.

A third-period winner would have made Wednesday an unforgettable night, but for now, Wright and Hakstol are both happy with the progress.

“Getting his first point is awesome, I think that’s a great step,” Hakstol said. “He deserved to score his first goal tonight. That line did everything right on that shift. Now, I gotta get him on the ice for a couple more minutes a night and just continue to let him grow.”

We thought that last comment by Hakstol was especially interesting, given the Twitter storm about his lack of minutes on Monday. Will Wright start seeing his ice time increase now?