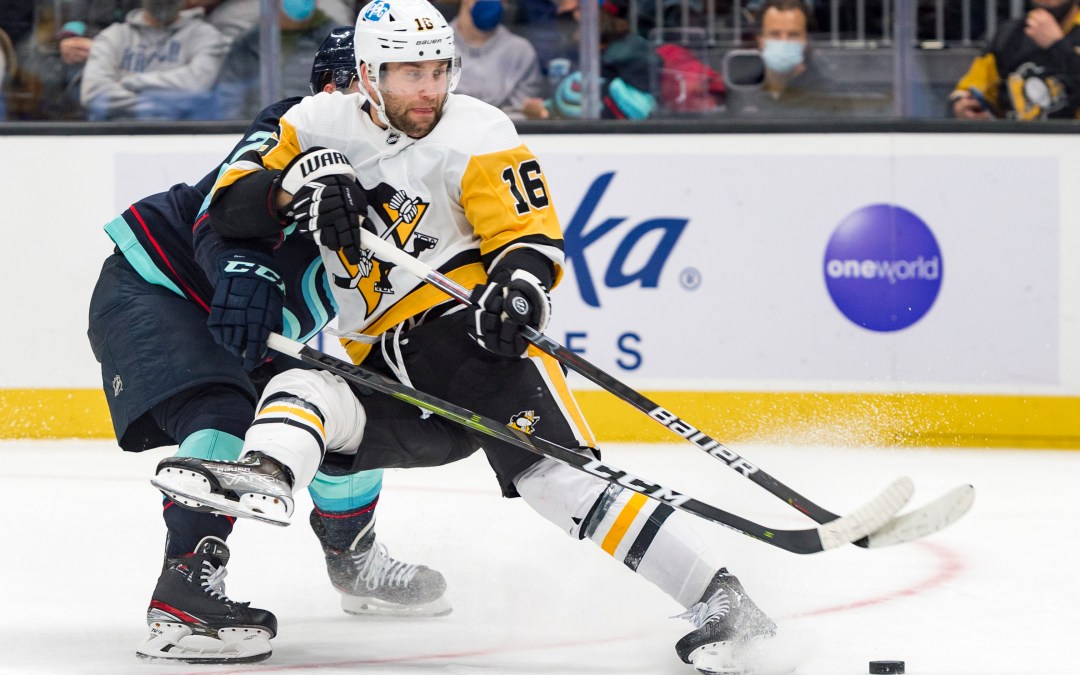 The Seattle Kraken knocked off the Pittsburgh Penguins for the second time in a week Saturday, sweeping the season series and sweeping a difficult three-game road trip. Backed by another awesome performance by netminder Martin Jones, the Kraken came away with a confident 3-2 win.

Jordan Eberle had said after morning skate on Saturday that another win against the Penguins could be a turning point for the franchise in terms of developing a winning culture. Is that what this is? Are the Kraken winners now?

Here are our Three Takeaways from a 3-2 Kraken win over the Penguins.

Thinking back to last season, on the rare occasion the Kraken would get wins, it almost always looked like they were giving everything they had to get to the final horn. Players would sell out to block shots, and as contests came down to the wire, you always felt like Seattle was on the brink of collapse.

When the Kraken have won this season, that has not been the case. They are playing with a certain swagger, where they seem to believe that even when they’re being outshot and out-chanced—as they were on Saturday—a positive result will come, so long as they stick to their structure. Desperation never seems to really set in, because this year’s Kraken rarely are desperate.

“There were pieces here that weren’t all that pretty,” coach Dave Hakstol said of Saturday’s game. “But there was never a point in the hockey game where you felt like our group was rattled or coming apart in any way, shape, or form. Guys are calm, guys are looking what they can do next shift.”

Get ahead? Great. Seattle will shut the opposition down. Fall behind? Fine. Seattle will find clutch goals to tie and eventually lead. That’s what this team is right now.

“We’re playing as a team, and it’s really fun to play that way,” Yanni Gourde said. “All four lines, all [six defensemen], [Martin Jones] has been unbelievable in net, so it’s been really team wins since the beginning of the year.”

While the first win of this three-game road trip, a 5-4 result over the Calgary Flames, required some serious tenacity, most of Seattle’s seven victories this season have felt like calm, confident wins that were well deserved. Though Seattle was outshot 37-28 in Pittsburgh, it never looked under duress, even in stretches when the Penguins were pushing.

“That’s the mindset and the goal we had setting out to this road trip,” Brandon Tanev said. “In the three games we played, we beat three good teams, and that’s the idea we wanted to do.”

The Kraken have won four games in a row for the first time in franchise history, and they just swept a tough three-game road trip that spanned three time zones and the entire North American continent. With the latest victory, Seattle improved to 7-4-2 and took sole possession of second place in the Pacific Division from the Edmonton Oilers.

You know a team is playing with confidence when every night it seems like it’s winning in different ways with different guys stepping up and contributing. On Saturday, it was Gourde and former Penguin Tanev who made the difference.

With 12:12 left to play and the game tied 1-1, Tanev redirected an errant Morgan Geekie pass with his shinguard, right onto the tape of Gourde at the top of the crease. Gourde wasted no time in swatting the puck by an unprepared Tristan Jarry to give the Kraken a 2-1 lead.

Then, after Matty Beniers had inadvertently deflected a Jake Guentzel pass into Seattle’s net to make it 2-2, Gourde returned the favor to Tanev, who showed his finishing abilities to give Seattle the win.

“Personally, that’s great for me, but I think it’s more important that the team got all six points on this road trip,” Tanev said. Turbo finished the night with a goal and an assist, while Gourde had a goal and two assists.

Morgan Geekie got elevated to play with Tanev and Gourde late in the game and assisted on both of their goals, bringing him to seven points in his last seven games.

Takeaway #3: The Kraken have good goaltending

A big piece of the swagger we mentioned in Takeaway #1 comes from the team’s confidence in its goaltending. Hakstol’s defensive systems revolve around keeping shots to the outside and allowing the netminder to make the saves he’s supposed to make. Martin Jones has done that and then some in the last three games.

Jones has returned to the form we saw from him in his earlier San Jose Sharks days, when he arrived and immediately demanded the starter role. After stopping 22 shots to earn a shutout in Minnesota on Thursday, Jones was razor sharp against the Penguins Saturday and stopped 35 of 37 shots. He has a .968 save percentage and 1.00 goals against average in his last three games.

Tanev called the goaltenders on this road trip—Jones and Joey Daccord—the “backbone” for the team. “We fed off them and we got some timely goals, and I think as a group we played and understood what we needed to do,” he said.

“Our goaltending has been really good throughout this road trip,” Hakstol added. “It started with Joey in Calgary, and Jonesy picked up right where he left off from his home performance a week ago. You have to have that in order to have success on the road, especially in a game like this. His performance is critical for us.”

What’s remarkable about Jones is how unremarkable he makes most saves look. Even on Pittsburgh’s best chances Saturday, Jones was always in position, wasting no movement, and simply closing off any holes from Penguins shooters.

Not only that, his rebound control was impeccable.

On nights when Jones hasn’t been at his best—the Oct. 27 game against Vancouver comes to mind—Jones has still looked calm and in position, but he hasn’t tracked the puck as well. Both Thursday and Saturday, you could tell he was dialed in by how pucks were hitting off of him and bouncing out of dangerous areas.

Jones hasn’t allowed many second chances lately, as he has been kicking pucks into corners or swallowing them up for face-offs.

Having Seattle’s No. 2 goalie playing the way Jones is playing right now is encouraging. Whenever Philipp Grubauer returns from his injury, if he too can pick up where he left off, Seattle’s goaltending will finally be where we hoped it would be a year ago.