After offseason “wake-up call,” Daniel Sprong has found his place with the Kraken 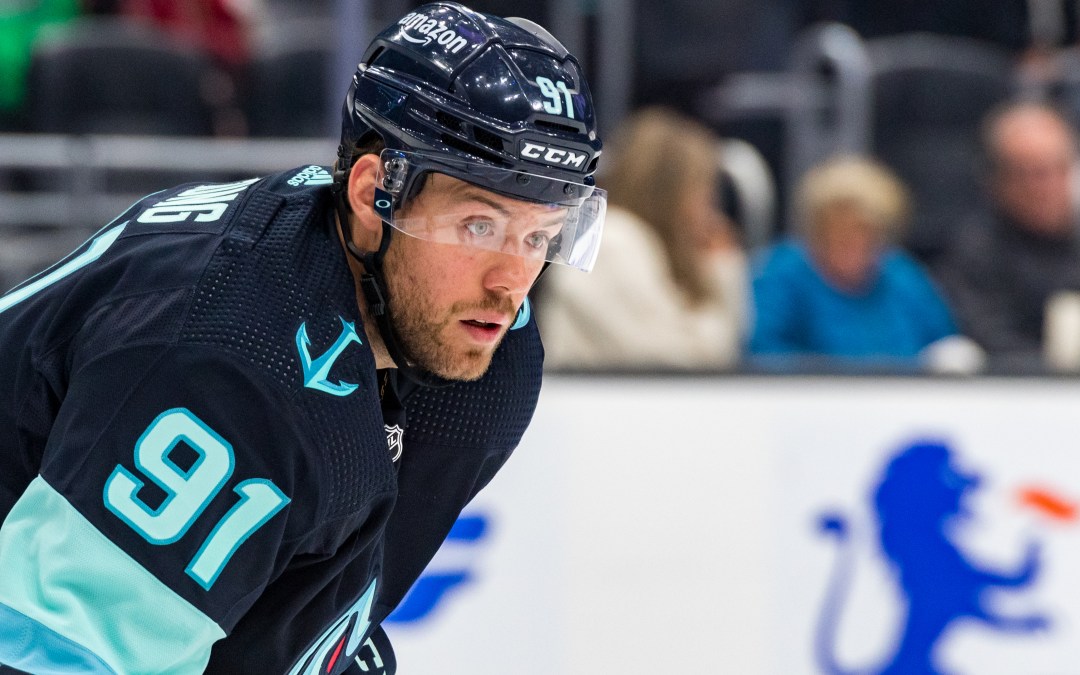 When Daniel Sprong came to Seattle in a Trade Deadline deal in 2021-22, he didn’t take long to show off his offensive prowess. Using his big shot and plus speed, Sprong notched six goals in the 16 games he played with the Kraken down the stretch. Combined with the eight goals and six assists he had scored in Washington, Sprong thought he had given himself a good chance to earn a contract extension. But things did not go the way he anticipated over the offseason, and he found himself battling for every opportunity he’s gotten since.

Now, after settling for a professional tryout deal, Sprong has not only earned a contract, he’s earned himself a spot on the Kraken roster and—on most nights—a place in the lineup.

When last season ended, Sprong remained a restricted free agent. To retain his rights, Seattle only had to extend a qualifying offer of 105 percent of his previous $725,000 salary. He had arbitration rights, though, meaning if Sprong didn’t like the offer the Kraken gave him, he could have filed to have a neutral third party determine his 2022-23 salary. With that in mind, it seemed like he had leverage, so summer was looking promising.

“You speak to your agent and you find out what your arbitration rights are, and the money was looking pretty good,” Sprong said. “So you feel pretty at ease when you get a value of what you’re projected at or what you could make. So, when it started off, summer was good.”

Soon after the end of Seattle’s inaugural season, Sprong—a big Formula 1 fan—went on vacation to Miami to watch his fellow Dutchman, Max Verstappen, win the Miami Grand Prix. When he returned, things were quieter than he expected.

To Sprong’s dismay, a qualifying offer did not come from the Kraken by the July 11 deadline, meaning he would become an unrestricted free agent on July 13. Still, he thought there were teams out there that would be excited to employ his services.

“When you have 14 goals and your Corsi numbers are pretty good and you had a really good end to the season, you feel pretty confident going to [unrestricted free agency],” he said. But the offers never came. “It was kind of a frustrating thing. And then, you kind of go month by month. Every day, go to the rink, go to the gym, go out in public. [People would ask,] ‘Where are you signing? Where are you signing?’ You get that question asked pretty often.”

Sprong says he heard through his agent that several teams had expressed interest in signing him, but nothing ever got done. The feedback was consistently that teams around the NHL knew he could play offense but were concerned about his play on the defensive side of the puck. “It kind of was just like a wake-up call because it was the same problem with every team.”

A bumpy road back to the Kraken

With his options thinning out, Sprong took his medicine and accepted that he would need to sign a PTO and earn a contract the hard way. He did have a few teams to choose from for his PTO, but he ultimately returned to Seattle. “I had a really good end to the season here, so I felt pretty comfortable here and decided to take my chance here,” Sprong explained. “The coaching staff has been great, guys have been great—really supportive during camp when they knew I didn’t have a deal.”

Getting signed off a PTO is far from a sure thing, and, even then, earning that contract is only half the battle. Sprong was outstanding in his preseason outings, though, and at times looked like Seattle’s most dynamic forward with the way he was playing.

After his hot start in Training Camp, the Kraken announced they had signed Sprong to a one-year, two-way deal worth $750,000 in the NHL or $325,000 in the AHL. That made the AHL a very real possibility for the 25-year-old winger, but he remained confident that he belonged in the NHL.

“Playing in the American League was never in my head,” Sprong recalled. “I wanted to make a statement on that PTO that I deserved to play, and if for whatever reason I didn’t make it—that if I ended up on waivers—that teams see I changed [my defensive play]. But it never got that far.”

It never got that far because Sprong made Seattle’s final roster when the Kraken broke camp.

Visa challenges kept Sprong away from the Kraken to start

Making the roster wasn’t Sprong’s final hurdle for joining the Kraken. Because he got signed so late in training camp, the process of getting his work visa didn’t get underway until just days before the season.

After Seattle’s bonding trip and last couple preseason games in Alberta, Sprong stayed in Calgary to get his visa situation sorted. Unfortunately for him, Canadian Thanksgiving plus issues in the process on the US government side slowed things to a crawl and caused him to miss the Kraken’s first road trip to Los Angeles and Anaheim.

He recalls having a flight booked to return to the US on Wednesday, but he didn’t get his passport back. So, the waiting game continued, and on Thursday, still not knowing when Sprong’s passport would be returned, Kraken director of team services, Brennan Baxandall, had four different flights booked for Sprong, hoping he could make one of them.

“It was a little bump in the road in the beginning of the year where I got stuck in Calgary, so it kind of ruined my momentum a little bit,” said Sprong. “I didn’t play for 10 or 11 days or practice much. I felt like I wasn’t really in a rhythm.”

Good chemistry with the fourth line

A big piece of Seattle’s early season success has been its ability to roll four lines. Playing mostly with Morgan Geekie and Ryan Donato, Sprong has found good chemistry and a mostly solid role (though he did sit out Sunday against Winnipeg).

Once the visa issue was finally sorted, Sprong got scratched for his first couple games along with Geekie. He joked that the two “Had a lot of one-on-one time together,” which has contributed to that chemistry, but he also says they feed off each other well. Two offensive-minded players, Sprong says Geekie understands the way he plays and knows that if he has the puck in a scoring area, he’s going to put it on net.

Geekie also feels the chemistry. “We’ve got a lot of offensive guys on our team,” he said. “I think last year, we struggled to score some goals, and this year, I think the chemistry is there, and pucks are going in for us.”

Positive reviews from his coach

The “wake-up call” that Sprong experienced during the offseason, with criticism of his 200-foot game coming from several potential landing spots, was no surprise. Kraken coach Dave Hakstol had said similar things at the end of last season. But Hakstol has been happy with what he has seen from Sprong this season.

“There’s no disputing his offensive abilities,” Hakstol said. “What we’ve asked out of Spronger is to become an everyday 200-foot player. There’s gonna be different opportunities in front of him in terms of where he is in the lineup, based off of exactly where we’re at, but right now, he’s found a really solid role with [Geekie] and [Donato].”

According to Seattle’s coach, it was not necessarily how Sprong defended, but rather how he played up and down the ice and how he managed the level of risk versus reward in his game. “It means how detailed you are in what you’re doing without the puck, the defensive part, and how you’re fitting into the scheme with the other five guys on the rink.”

The Kraken coach had high praise for how hard Sprong has worked to get better in those areas and says that’s the reason he’s been in the lineup most nights.

Sprong was back to being a scratch Sunday against the Jets, and we suspect there’s a chance he could sit out again Thursday against the New York Rangers. But he earned his contract, earned his spot on the NHL roster, and earned playing time in the early parts of the season. Now, for Sprong, it’s just a matter of continuing to prove himself as a 200-foot player while maintaining his offensive production. If he does that, he soon could earn himself a permanent role in the Kraken lineup.