Three Takeaways: Kraken get another huge 3-2 overtime win over Kings 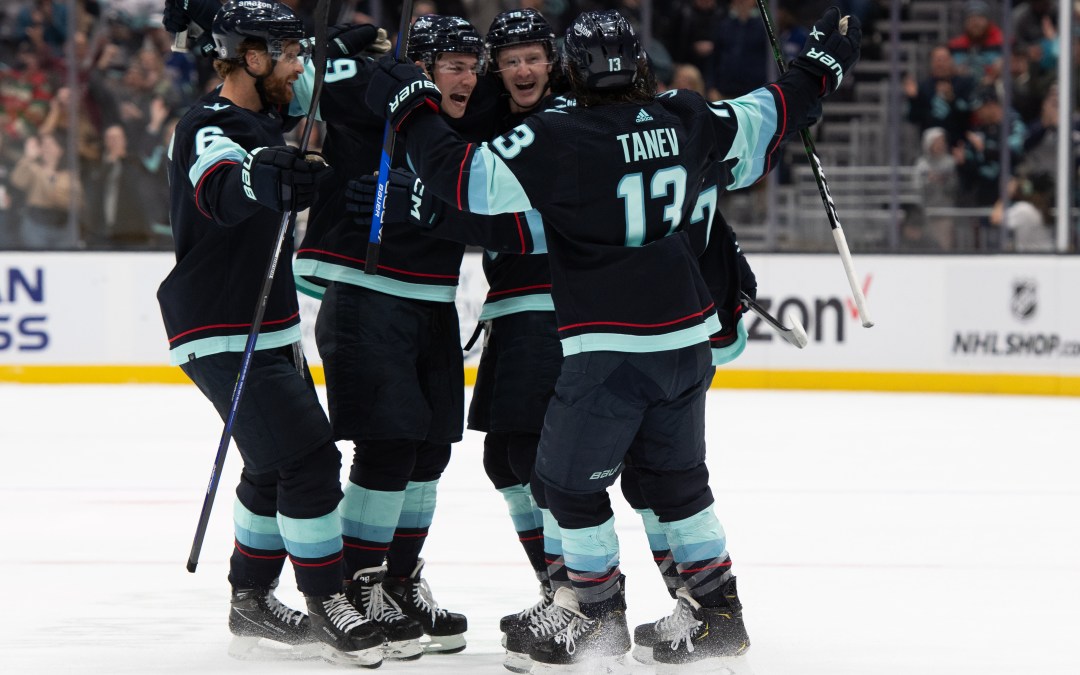 That was a big one. The Seattle Kraken battled through the daunting 1-3-1 forecheck of the Los Angeles Kings to earn two huge points against their Pacific Division rival Saturday at Climate Pledge Arena.

If the Kraken had gotten the W in regulation, they would officially be sitting in second place now, but since the Kings got a point, they’re still technically in the lead despite having played three more games. Regardless, it’s a huge victory for the Kraken, who have righted the ship after two consecutive losses Friday and Sunday of last week.

“When you go into those games, those are huge points that you give up,” Jordan Eberle said of the recent losses. “You never know when you might need that extra point to get in [the playoffs], so we’ve worked on it, and obviously, it’s worked out.”

“Every divisional game is so big,” added coach Dave Hakstol. “So that extra point is really important. It’s the kind of game that you would expect on these kinds of nights.”

Another impressive 27-save performance by Martin Jones, plus goals by Jared McCann, Daniel Sprong, and Eberle, gave the Kraken the big 3-2 overtime victory against the Kings. Here are our Three Takeaways.

Takeaway #1: The Kraken have figured out overtime

After Seattle lost to Winnipeg in overtime on Sunday, alarm bells were ringing about the team’s struggles in three-on-three extra sessions. The Kraken at that point had not only lost all three of the extra sessions they had played, but they also seemed to just not really have much of a plan.

The Kraken worked on it this week in practice, and it’s a good thing, because Saturday’s game against the Kings was Seattle’s third straight game to go to overtime in a 2-2 tie. Against Los Angeles, Seattle showed impressive patience despite not being able to gain possession of the puck for much of the first two minutes.

“It was a different overtime tonight [compared to Sunday],” coach Dave Hakstol said. “We didn’t have the puck a whole lot, but we defended really well. We never really gave up— we didn’t give up anything threatening.”

When the Kraken got their chance, they pounced and took advantage of an overly aggressive play by the Kings. With Justin Schultz battling with Kevin Fiala in the Seattle zone, defenseman Sean Walker jumped up to help. Schultz gained control for just long enough to chip it past Walker and send Eberle and Brandon Tanev on a two-on-one.

“We were patient,” Hakstol said. “Schultzy does a good job defending, we took advantage of their defenseman diving in as we punched that puck past him, and that creates the outnumbered and the odd-man situation.” Hakstol also joked that the practice this week hasn’t meant anything. Instead, he said the formula is just getting Eberle and Tanev out there together, as they were the forwards on for Schultz’s game winner Thursday against the Rangers as well.

This version of Kraken overtime where they stay behind the puck, wait for their opportunities, and aren’t afraid to circle back and regroup isn’t anything groundbreaking; a lot of teams do that kind of thing. But, it sure will give them a fighting chance far more often than the previous version, which tried to force plays and seemed generally out of sorts.

Sprong and Eberle scored two very different types of goals Sunday, with Sprong firing away from the left circle on the power play, and Eberle beating Cal Petersen off an odd-man rush opportunity in OT.

But if you look closely, there’s an interesting little similarity between the two. As Sprong shot the puck 53 seconds into the third period, his eyes were actually on Alex Wennberg, who was drifting toward the top of the crease.

“I work on it a good amount in practice, the no-look five hole, but it hasn’t been going in for me when I’ve tried it in a game,” Sprong said. “The D takes [Wennberg], so I just kind of use Wenny there, and [Petersen’s] legs are open, and I put it five hole.”

Taking a page out of Sprong’s book, as Eberle raced up the ice with Tanev in the extra frame, Eberle took a quick peek at Petersen, but otherwise had his gaze glued on Tanev the whole time. Still looking to his right, Eberle let the puck fly and beat Petersen over the glove.

So, our takeaway here is that the secret to scoring is to just not look where you’re shooting… or something like that. But seriously, both of those goals were pretty sick because of the no-look aspect of them.

Takeaway #3: Response to goals against has been good

We’ve talked about this a number of times lately, but Seattle has done a fantastic job of minimizing damage after giving up goals against. A big part of that has been the outstanding play of Jones, who was great yet again Saturday, but the Kraken have made an effort to push back after conceding goals.

After Trevor Moore scored a short-handed breakaway goal early in the third period, the Kraken not only responded with a good next shift, they immediately re-tied the game at 2-2.

“It’s not really something we’ve talked about recently,” Hakstol said of responding to goals against. “We talked about it early on, whether it’s a goal for or a goal against or a good shift or a bad shift. It’s a recognition, to start with, right? You gotta realize and recognize what just happened in the hockey game and then what needs to come and follow that type of shift up.”

It was common for the Kraken to allow goals in bunches last season, and we saw that a few times early this season. But aside from two quick goals against to start the third period in Calgary on Nov. 1, it’s been one and done for opponents in November.

A great example of the Kraken’s ability to push back was Sprong’s tying goal against the Kings. Moore’s short-handed goal could have really sapped Seattle’s momentum, but the power play went right back to work and answered in just 18 seconds.

“That can really flip momentum,” Hakstol said of the goal against. “That can be a switch on the game, and the fact that the next power-play group went out there and was able to answer was really important.” Hakstol added that on the shift after a goal against, they don’t need to go out and do anything special, but they need to have a competitive shift. Seattle has certainly done that and more since the end of October.

The Kraken could have had several more goals Saturday, if not for those pesky goalposts that kept getting in the way. During a mad power-play scramble in the second period, Alex Wennberg swung the puck behind the net to Matty Beniers. Petersen was way out of position and dead to rights, but Beniers shot the puck across the front of the wide open net and hit the far post.

Then, in the third period, Beniers made a great play to spin off a check and find Jared McCann open on the far side. McCann had what looked like his second goal of the game, but he too rang it off the post. Seattle has been doing that a lot recently.

We asked Eberle about that after the game, and he said, “I think it was the Mighty Ducks that goes, ‘If it hits three inches the other way, it’s completely missing the net,’ so you can’t really focus on that stuff.” If we’re getting nitpicky, the exchange between Gordon Bombay and Charlie Conway indicated that shots hitting the post come down to a quarter of an inch in either direction, but the sentiment is the same.

The Kraken have done a good job of sticking with it and not getting frustrated, despite denting the goalposts on a number of occasions.