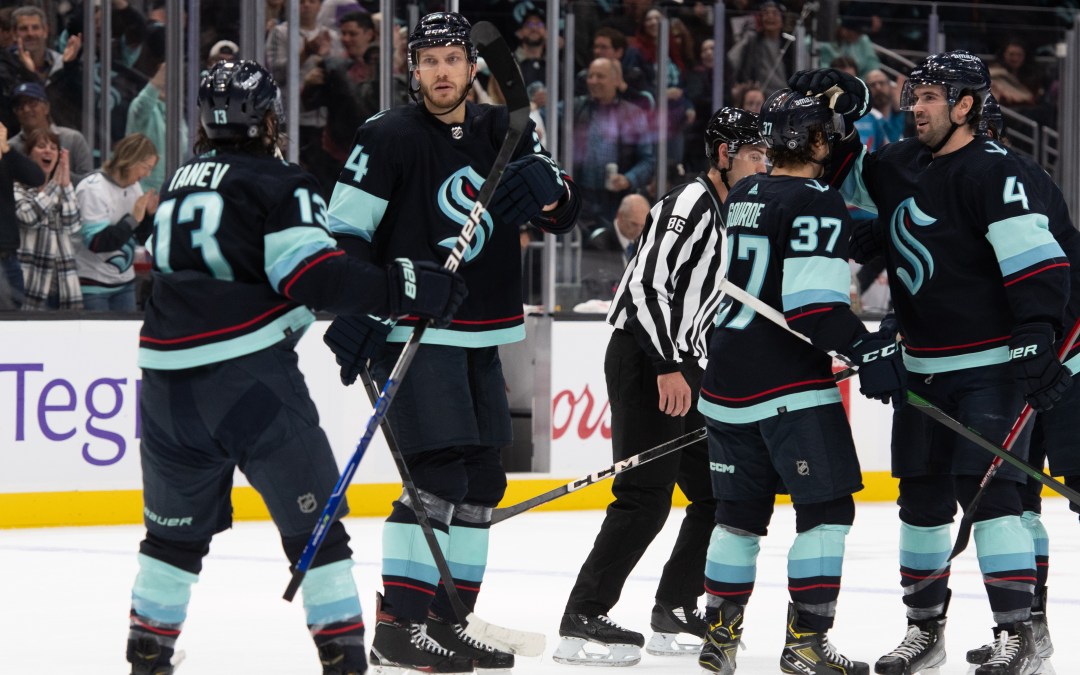 That’s… *not* Kraken hockey, baby! You don’t often see Seattle in track meets (or swim meets, since both teams were sea creatures?), but that’s what happened Wednesday against San Jose. In the end, the Kraken outran (out-swam?) the Sharks with an 8-5 win to improve to 8-1-1 in their last 10 games and close out their six-game homestand 4-1-1.

“It was fun for the fans, but it stunk for the coaches,” coach Dave Hakstol joked about the high-scoring affair. “Sometimes there’s nights like this. It kind of had that feel right from the go.”

With the win, Seattle now officially jumps over Los Angeles in the standings and holds sole possession of second place in the Pacific Division with three games still in hand. That was a big two points.

It’s another new way for the Kraken to win, earning a franchise record eight goals and overcoming a Timo Meier hat trick. And although coach Hakstol couldn’t have been thrilled about his team continuously letting the Sharks back in the game, the boys prevailed in the end.

“You gotta win games all different ways,” Hakstol said. “This isn’t the way that you draw it up, but it’s still a win, and you got to find different ways to win hockey games.”

Here are our Three Takeaways from a wild 8-5 Kraken win over the Sharks.

Takeaway #1: Everyone off the schneid!

Bjorkstrand getting on the board feels especially important. The key offseason acquisition has scored more than 20 goals in three of his last four seasons, but he has been mired with just one this season thanks to a shockingly low shooting percentage.

He finally got the monkey off his back against the Sharks. With the game tied early in the third period, Brandon Tanev forced a turnover at the San Jose blue line. The puck went right to Yanni Gourde, who found Bjorkstrand all alone with oodles of time. Bjorkstrand waited out Kaapo Kahkonen and tucked a backhander up under the bar.

“He scores that goal, and we all went nuts on the bench,” said Matty Beniers. “He’s so deserving of it. He’s getting so many offensive chances every night, and now one’s going in, and you’re probably going to see they’re all going to start falling for him.”

Andre Burakovsky shared that Bjorkstrand had a secret weapon Wednesday. Bjorkstrand recently switched to a new stick and had been scoring a lot in practice recently. So, when he buried one Wednesday, Burakovsky told him, “It’s the new stick, bud.”

“It’s great for him,” Hakstol added. “That’s a heck of a goal. He’s had some really good opportunities here over the last 10 games. That play is— first of all, it’s off of hard work on a re-load in the offensive zone, and he made no mistake.”

It was a big goal in the game and perhaps an even bigger goal for the player, who Seattle certainly hopes can get going offensively.

Takeaway #2: Jamie Oleksiak is back

Though the Kraken had some success with Jamie Oleksiak out of the lineup, the Big Rig was a sight for sore eyes on the Seattle blue line Wednesday. It is our belief here at Sound Of Hockey that consistent and balanced right-shot/left-shot defensive pairs has been hugely helpful to this team. Without Oleksiak, Seattle had temporarily lost that balance, plus a big, physical presence on the back end was suddenly missing.

In his first game back from his lower-body injury, Oleksiak found his way onto the scoresheet. Midway through the second period, San Jose had a delayed penalty coming. With Martin Jones off for an extra skater, the Kraken maintained possession for an extended period. They worked it around the offensive zone until Justin Schultz found Oleksiak open on the doorstep. Oleksiak redirected it by Kahkonen to make it 4-2 Kraken.

“He was good,” Hakstol said of Oleksiak. “Obviously, we love his defensive game and the hardness that he brings there. He chipped in with a goal in the six-on-five with the delayed penalty. So it’s not really a defensive two-way defenseman’s dream tonight at 8-5, but he contributed in a lot of different ways, and he’s a big part of our group. It’s nice to have him back in the lineup.”

Just like how the Kraken saw immediate results in three-on-three overtime after practicing that scenario, they also practiced six-on-five situations this week. Lo and behold, an extended opportunity came up in the middle of the game, and they took advantage. As we said after last game, practice makes perfect.

Takeaway #3: The Killer B’s come through in a big way

Not only did Bjorkstrand score an important goal Wednesday, the other two of the “Killer B’s” had an enormous night as well.

Burakovsky had Seattle’s first goal of the game on a five-on-three power play, then assisted on Oleksiak’s goal and Schwartz’s first goal.

Beniers had three points of his own, with a beautiful goal off a rush to seal the game at 7-5, and an even better assist on Vince Dunn’s goal in the second period. He made something out of nothing, attacking an offensive zone full of Sharks, despite being completely outnumbered. Beniers flew deep into the zone, then somehow snuck a pass between Jaycob Megna and Luke Kunin. The pass found Dunn driving to the net, and he tied the game at 2-2.

“I loved his game three nights ago,” Hakstol said of Beniers. “If you go back and look at that hockey game, he did so many really good things. High-level, good two-way play, good offensive plays, and he followed it up tonight.”

We’ve quietly had just the smallest inkling of concern that Beniers may have been hitting a bit of a wall. This is, after all, his first full pro season and the first time he’s experienced the grind of an 82-game campaign. After a torrid start to the season, Beniers had gone six games without a point before earning two assists against the Kings on Saturday. Wednesday was a breakout.

It’s a great sign to see Matty back to his contributing ways after a quiet stretch.