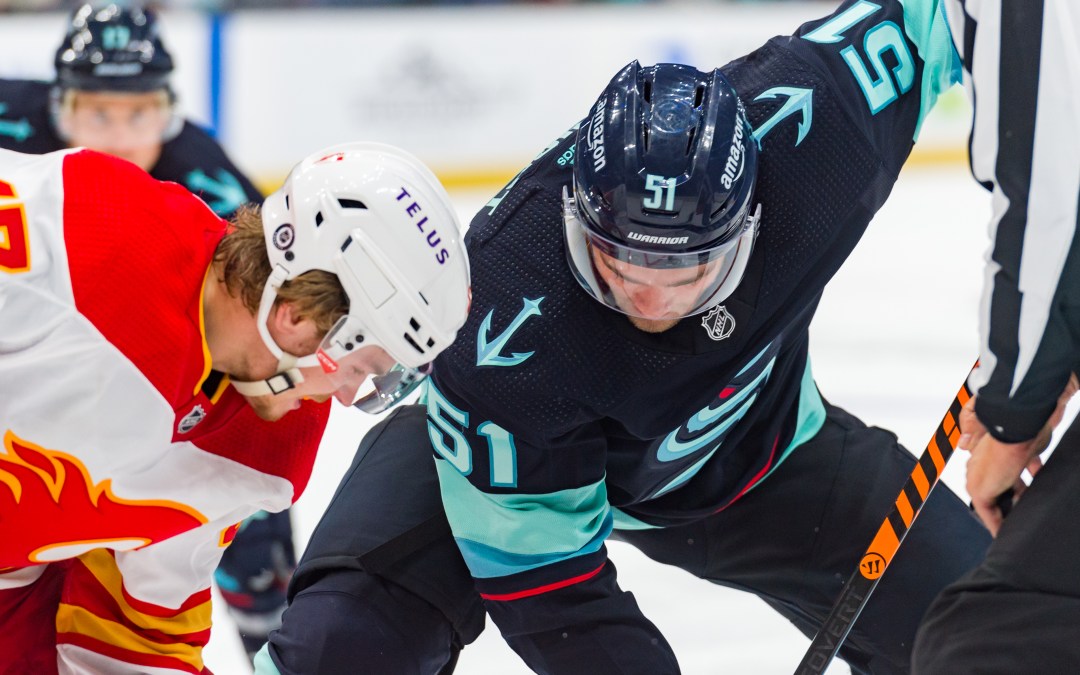 It happened 1:42 into the second period. That was the time when Shane Wright scored his first professional goal. No, it wasn’t at Climate Pledge Arena for the Kraken, but rather the Scotiabank Saddledome in Calgary, where he was playing for the Coachella Valley Firebirds. Wright was making his American Hockey League debut on Tuesday, and it was the first game he played in his 14-day conditioning assignment. The Kraken had sent the fourth overall pick of the NHL Draft to the Firebirds on Sunday.

Back in Seattle, earlier in the day, Seattle coach Dave Hakstol talked about the AHL assignment.

“Great, great opportunity for him to go and play some real valuable minutes at a high level, in an important role down there,” Hakstol said. “He’ll get that opportunity to start with tonight.”

Wright played on a line with Ville Petman and Kole Lind Tuesday, and the goal he turned in wasn’t cheap.

After a neutral zone turnover, Wright turned on the jets the other way and beat the reigning AHL Goalie of the Year and former Everett Silvertip legend Dustin Wolf over his shoulder.

It was a goal that might be overlooked on any other AHL night, and while it tied the game at 1-1, Coachella Valley would ultimately lose the game 5-3. But it had to be a huge relief for the 18-year-old rookie.

He’s played in seven NHL games with Seattle and has one assist to show for his work in very limited minutes. It’s not the script that everyone expected for a player that hopes to have a stellar NHL career ahead of him.

Just to be able to send him to the AHL for two weeks, the Kraken had to scratch Wright for five straight games. You would understand if he was down or frustrated because of his lack of playing time. If he is, he’s never shown it. Wright practices hard daily, has never let up, and is all smiles in the dressing room with his teammates.

The goal was the highlight, but Wright played strong throughout the night. After scoring, he made another play where he nearly split two defenders, forcing one to take him down, and drawing a penalty. He forced a turnover on a forecheck that led to a chance on goal and made a couple heady passes that led to shots on goal.

After being sent down on Sunday, Wright was able to get one full practice in with the Firebirds before Tuesday night’s game. He will next hit the ice on Thursday with a rematch in Calgary against the Wranglers.

He stands to get into five games with Coachella Valley before his time is up there, and then the questions will rev up again. Is he ready after a little time the AHL? Will he crack Seattle’s lineup and get meaningful playing time? Will he be sent back to the Ontario Hockey League for the rest of the season?

The answers are all still up in the air. But, there is a possibility that the Kraken loan Wright to Team Canada to play in this winter’s World Junior Championship, which will give him another opportunity to play against top talent closer to his age group.

“That’s an option that’s available,” Hakstol said. “But you know, I’m certainly not jumping to that yet. Lets go one step at a time here. And this was the right timing for Shane to go and be able to play some real valuable minutes in Coachella. And that’s what we’re focused on now.”