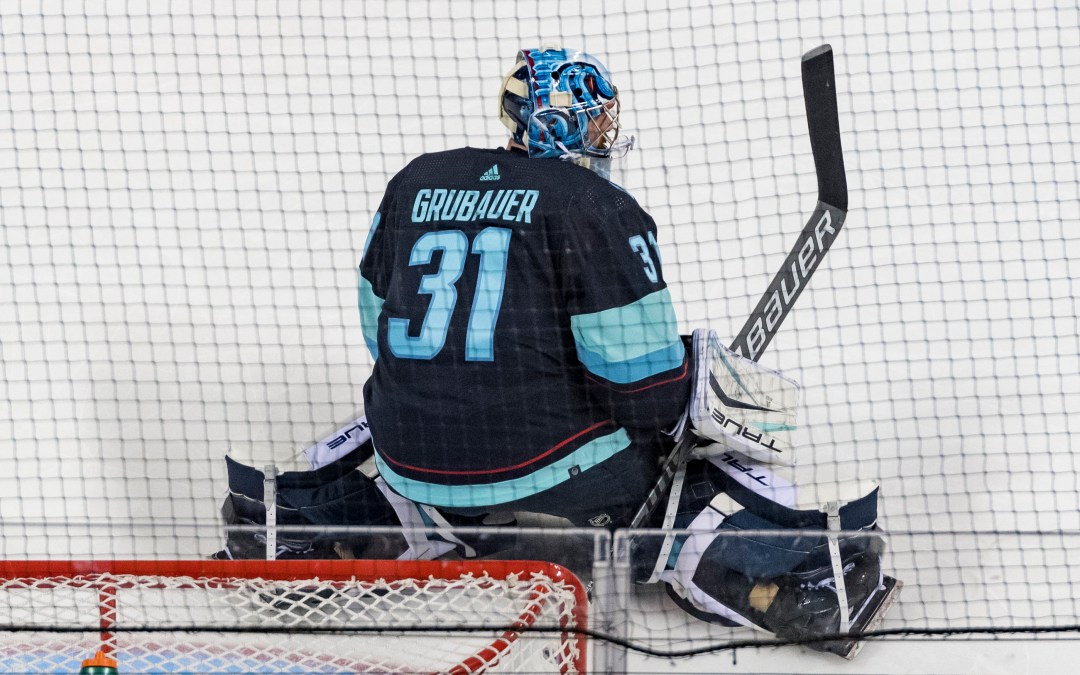 Vegas for a birthday is a popular destination, and that’s where Kraken goalie Philipp Grubauer spent his 31st Friday night. Grubauer, making his first start since Oct. 21 against Colorado, kicked away 20 Vegas Golden Knight shots to earn his first victory of the season as Seattle came away with a statement type 4-2 win at T-Mobile Arena. The Kraken (12-5-3) scored twice in the second period to win their fourth straight overall and fourth straight on the road.

Andre Burakovsky scored twice and Adam Larsson had two assists for the Kraken who inched closer in the Pacific Division standings, climbing to within six points of the Golden Knights.

Nicolas Roy scored a goal, as did Phil Kessel. Former Seattle Thunderbirds defenseman Shea Theodore had two assists, and Adin Hill made 24 saves for the Golden Knights (16-5-1) who fell to 7-4-0 at home.

Seattle gave up a two-goal lead in the first period but pulled away in the second and shut down the Vegas attack during the third period. The Golden Knights only had six shots in the final frame, and their big guns, Mark Stone and Jack Eichel, were held off the scoresheet.

Burakovsky was the offensive star, but it was a team effort for Seattle to win the game.

“We just wanted to get back to playing the way we play, ” coach Dave Hakstol said. “We were really happy with the two points the other night [against San Jose]. You gotta find different ways to get ’em, but we got back to the way we wanted to play tonight.”

“Just amazing to watch from back there how everybody is contributing and no selfish plays,” added Grubauer.

How it played out for the Kraken and Golden Knights

Ryan Donato got the scoring going early in the first period. He was parked in front of the Vegas goal and made it 1-0 at 2:30 when he cleaned up an Adam Larsson rebound and scored from just outside the crease.

“Lately, we get rewarded when we get pucks on net,” said Larsson. “That was a prime example of just close your eyes and shoot it, and it really landed pretty much on his stick in front of the net, so that was nice.”

Burakovsky then continued his hot play when he stepped into a wrist shot that Hill got a piece of but couldn’t keep from trickling in to make it 2-0 Seattle at 8:00.

Vegas would work the game back when Nic Roy cut the lead to 2-1, banging a rebound in at 10:46 during a Golden Knights power play.

Kessel then tied the game 2-2 at 12:50 when he got a piece of a Theodore shot in front of Grubauer.

Burakovsky scored again at 5:20 of the second to put the Kraken up 3-2 after Jamie Oleksiak drove the puck deep. He found Burakovsky outside the circle and buried a wrister. It was the third goal in the last couple games to go along with five points.

Jordan Eberle reinstated the Kraken’s two-goal lead at 4-2 when he scored a highlight reel goal at 18:46. Hill stopped his initial shot but he got the rebound and put it back.

That was all Grubauer needed. After the two goals against in the first period, he was perfect the rest of the way, including an impressive glove save on Theodore in the second. Grubauer said, “You can’t get too high or too low,” after saves like that, but he recognized the importance of timely stops and said that was probably one of them. He gave the credit to his teammates for the win, though. “They made it really easy for me tonight, and once you make a couple saves, everything is kind of settling in a little bit.”