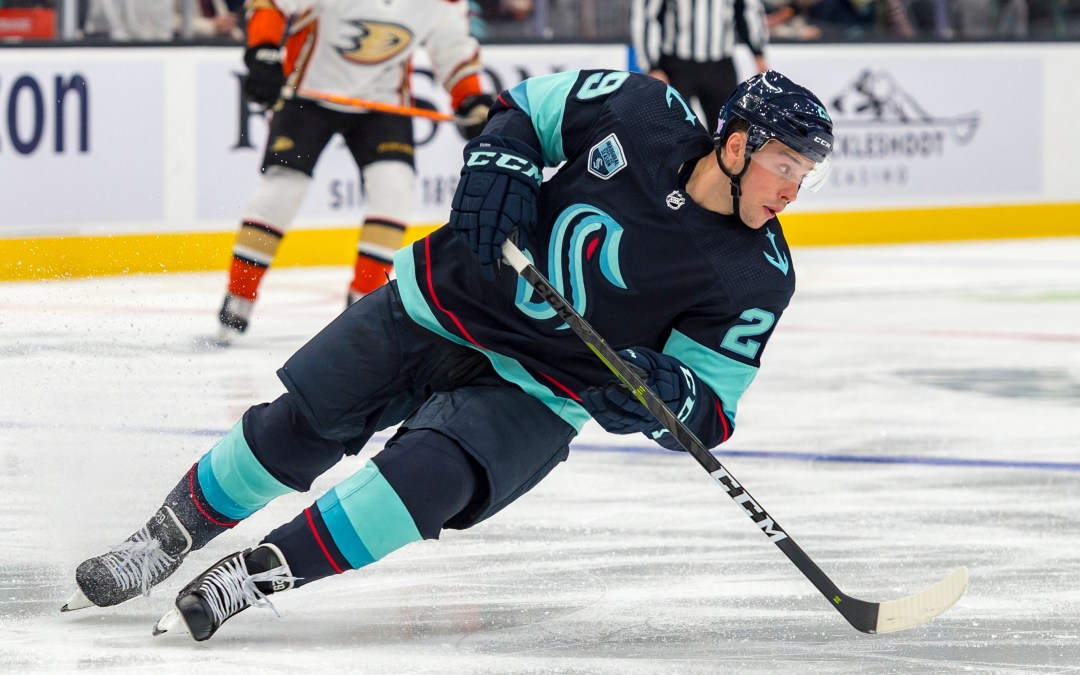 What is it about those pesky last-place Anaheim Ducks? Seattle had them dead to rights on opening night in October, dominating every facet of that game, only to collapse in the third period and lose in overtime. Sunday, the Kraken came out again looking like they were ready to blow the Ducks out of the pond, but somehow Anaheim hung around, scored three power-play goals, and made things downright stressful in the third period.

Seattle learned from its early-season sins, though. Sunday, when it looked like they were about to give the game away, the Kraken bent but didn’t break and escaped with two more important points in the standings.

With the victory, the Kraken are now 10-1-1 in their last 12 games and are on their second five-game win streak of that stretch. With the Golden Knights idle Sunday, the win brings Seattle (at least temporarily) within four points of Vegas for first place in the Pacific Division. Oh, and the Kraken still have two games in hand on the VGK’s.

Here are our Three Takeaways from an imperfect but important 5-4 Kraken win over the Ducks.

It’s hard to put our finger on exactly why we root so hard for Daniel Sprong to succeed, but there’s something about how the story has played out for him since he arrived in Seattle at last season’s NHL Trade Deadline. He keeps getting asked to prove himself, and he keeps responding.

Sprong’s big shot on the power play led to Matty Beniers’ power-play goal in the second period (more on that in the next Takeaway), but his biggest play came in the third period. He streaked across the Anaheim blue line and tried to dump the puck deep. It hit a Duck defender, but the puck took a fortuitous bounce and sat up nicely for Sprong to regain control at the top of the slot.

With things looking like they could have gone sideways for the Kraken at that stage in the game, regaining the lead was paramount. Leave it to Daniel Sprong; he’ll get the job done.

Takeaway #2: Matty Beniers is on fire

We wrote a couple games ago that concern had started to creep in when Kraken star rookie Matty Beniers had gone quiet for six straight games. Well, he has been anything but quiet in the four games since and notched his second three-point night during that span Sunday against the Ducks. In total, Beniers now has nine points in his four-game scoring streak, which officially qualifies him for “a heater.”

Sunday, he won the face-off that led to Jared McCann’s game-opening goal. That earned him a second assist. He also got an assist on Sprong’s game winner by connecting on a long breakout pass to Ryan Donato that started the play.

Yet, his biggest moment came midway through the second period with Seattle on the power play. Things had gotten shifted around a bit in the course of play, and instead of hovering around the right half wall, where he is normally posted, Beniers found himself in the net-front position. Sprong initially fumbled a pass but quickly picked it up and fired it at John Gibson. Gibson didn’t handle it cleanly, and Beniers pounced and swatted it home.

It was a huge goal at the time, because it re-extended Seattle’s lead to two goals.

This kid is so special. After that quiet stretch, here’s hoping he stays noisy for as long as possible.

The win may have come with a cost for the Kraken. Three minutes into the second period, with the Ducks changing, Seattle had plenty of time to reset for a breakout. Morgan Geekie laid a pass back to an uncontested Vince Dunn, then began racing up the boards. Looking back at Dunn, Geekie didn’t see Adam Larsson crossing his path. Larsson’s shoulder caught Geekie right in the face, and the 24-year-old forward went down in a heap.

Geekie was helped to the bench and then immediately went down the tunnel. He did not return to the game, and the team announced that he had suffered an upper-body injury.

It would be complete conjecture to say what we think happened to Geekie, so we won’t; but it didn’t look great. If Geekie misses any significant time, it will be a big loss for the Kraken. In the midst of his best NHL season so far, Geekie has been key for Seattle’s impressive fourth line that has helped drive offense for the team.

Without their fourth center in the second half of Sunday’s game, Matty Beniers was often seen doing double duty to center both his usual line and also that fourth line. That’s not sustainable, so if the Kraken need to replace Geekie in the lineup, the most obvious options would be to have Ryan Donato play center with Sprong and Karson Kuhlman on the fourth line, or they could bring Shane Wright back from his conditioning stint in Coachella Valley.

Bonus Takeaway: Set plays are cool when they work

McCann’s goal less than a minute into the game came just after an offensive-zone face-off. Best friend of the pod, Alison Lukan, called this out on the ROOT Sports broadcast as well, but we wanted to mention it here. The goal was scored because Beniers, Jordan Eberle, and McCann executed a pre-designed set play to perfection.

Beniers pulled the face-off back between his feet. Eberle, who had lined up on the left hash, lunged to his right to grab the loose puck. McCann, who had lined up on the right hash, immediately took off to loop around the bottom of the face-off circle and hopefully get lost by the Anaheim defense. As soon as Eberle gained control, he blindly threw the puck to the front of the net, hoping McCann would be there. Sure enough, McCann had gotten lost by the Ducks defense and was alone in front of Gibson. The pass from Eberle was on the money, and McCann just had to wait out Gibson and throw it up under the bar.

Set plays don’t always work, because everything from the drop of the puck onward has to break perfectly in your favor. One minute into the game against the Ducks, everything broke perfectly in Seattle’s favor, and the result was a beautiful goal.