Kraken hold on to sneak by Anaheim 5-4 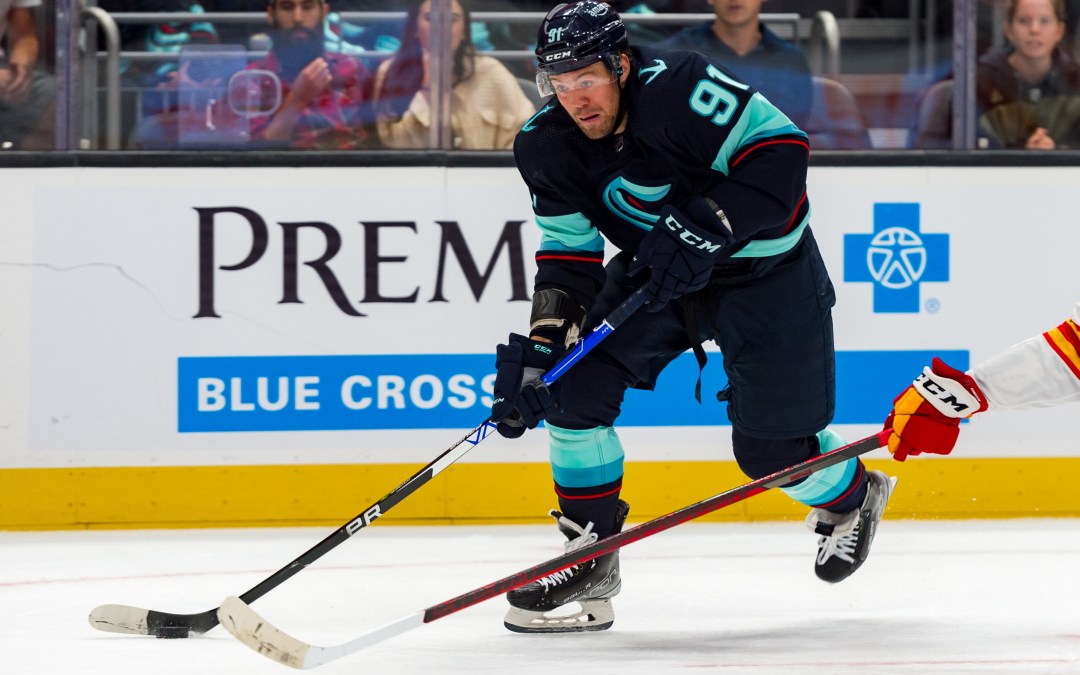 It may not have been the prettiest game, but the Kraken found a way to outlast the Anaheim Ducks 5-4 at the Honda Center Sunday night.

The Kraken held 2-0, 3-1, and 4-2 leads, but the Ducks held their own and eventually tied the game 4-4 thanks for three power-play goals.

Daniel Sprong put the Kraken ahead for good 3:41 into the third period when he got the puck in the slot, and showing tremendous patience, waited to shoot until an Anaheim defender fell into goalie John Gibson and knocked him down. Sprong then fired a backhand into the net to give Seattle the 5-4 lead.

“Donnie gave it to me wide,” Sprong said. “I kind of wanted to dump in and go for a line change and I think I ended up hitting [Mason] McTavish in the foot or something and it came right back to me in the slot. I think instinct just took over and put in the net.”

Matty Beniers had a goal along with two assists, and Sprong added an assist to his goal. Martin Jones started in net and stopped 25 Anaheim shots for the Kraken (13-5-3).

“Third period, we liked the way we played, we were a little bit better and more sound,” Seattle coach Dave Hakstol said. “First two periods we felt like we were too sporadic, there were stretches that were really good, but gave up too much, too easy at different times during the first couple periods. So, it was good to go flip the switch in the third period and lock it down a little bit and play a good 20 minutes on the road.”

Troy Terry had a goal and assist for the Ducks (6-15-1). Gibson started the game and made 14 saves. He left due to injury after the Sprong goal and was replaced by Anthony Stolarz who finished with six saves.

“Right now we have a little good motor going, we feel like we were just playing good hockey and obviously playing against teams in our division,” Alex Wennberg said. “It’s huge points for us obviously, right now. We think we’re doing a good job and getting rewarded.”

How the Kraken and Ducks played out

For the 12th time this season, the Kraken opened the scoring on Sunday. This time it was Jared McCann who went to the net after a face-off win 33 seconds into the game. Jordan Eberle threw a perfect pass, and McCann picked up his eighth goal.

Wennberg gave Seattle its first two-goal lead at 6:53 when Andre Burakovsky found him on the doorstep and he made it 2-0.

“Obviously, scoring goals is a lot of fun too, and helps the team to get confidence,” Wennberg said. “It’s great, but I mean all that matters is the two points, so to be able to help them out with that was just great.”

Anaheim got back into the game with a power-play marker from Troy Terry when he got the puck down low and slid it through Jones’s five-hole at 14:16 to make it 2-1.

Just before the end of the first period, Vince Dunn would make it 3-1 at 19:33 when he got the puck at the top of the zone. Inexplicably, the Ducks defense opened up the middle of the ice and Dunn walked into the high slot and beat Gibson with a wrist shot.

The Ducks, refusing to go away, made it a one-goal game again, 3-2 at 1:48 of the second on a goal from Derek Grant scored from the slot.

Beniers would quickly reinstate the Kraken two-goal advantage at 4-2 when he scored a power-play goal of his own, putting back a rebound from the crease for his seventh of the season. Beniers has nine points in his last four games and spent the second half of the game double shifting due to Morgan Geekie leaving with an injury after he skated into Adam Larsson’s shoulder in the second period.

The Kraken then started a parade to the penalty box and the Ducks made them pay.

First it was Mason McTavish at 16:34 cutting it to 4-3 on a power-play goal, scoring on the back door. Just over a minute later, at 17:55, Adam Henrique tied the game with the third power-play score from Anaheim.

“We’ve found different ways to win games,” Hakstol said. “I don’t really like the term ‘find a way to win,’ we built good wins so our team has a confidence in that we’ve done it in different ways for the most part. We found a pretty good rhythm out on the road, and you get a group of 20 guys every night, whichever 20 guys it is, in the lineup are working hard for one another.”