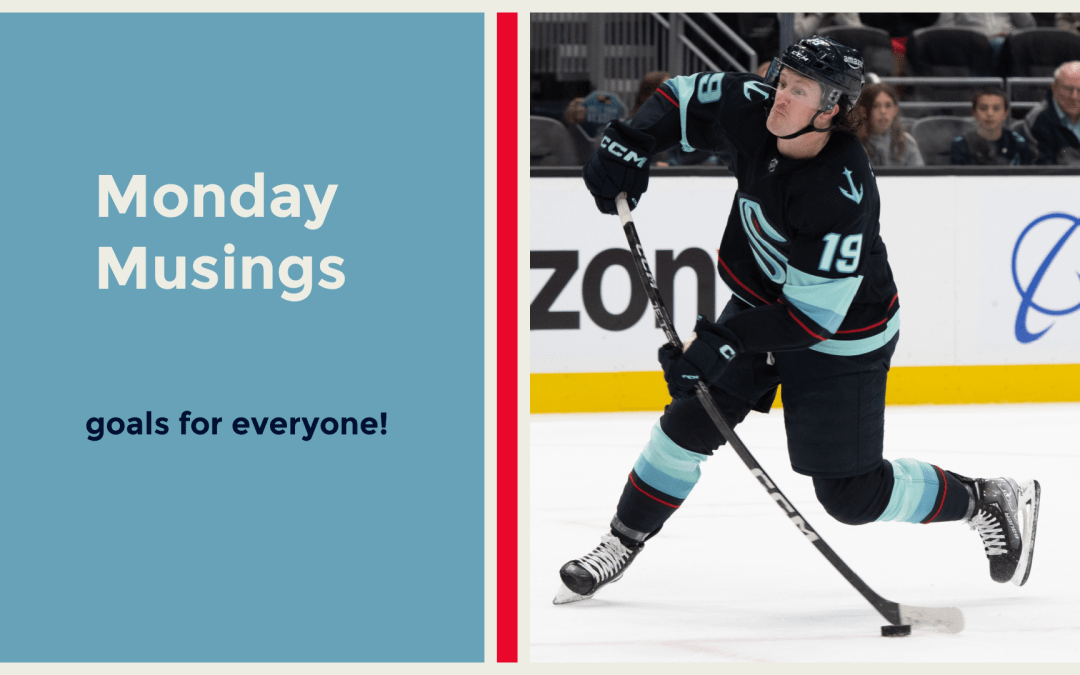 It was another great week for the Kraken who are now 13-5-3 after three regulation wins in three games this week, all against divisional foes. At times, the games were not pretty, but as coach Dave Hakstol said, “You have to find ways to win.” All three games featured scenarios where the Kraken held two-goal leads, only to see the opposing team each night come back to tie it up before the Kraken would pull away for the victory.

Wednesday night’s home game against the San Jose Sharks was one that people in attendance won’t forget. It was a back-and-forth affair that ended with seven unique goal scorers across eight total goals by the Kraken in an 8-5 win. It was a fun and rowdy atmosphere at Climate Pledge Arena that night, and one would think there were a lot of new faces in the building that night, as people returned home for the holiday.

At the time, that loss cast a premature doubt on the Kraken season with several fans asking if we were in for another long year. Despite knocking off the Rangers and the Kings the prior week, people were still waiting for a benchmark game against one of the elite teams in the league. It was nice to finally beat the Golden Knights, especially on a night where the Kraken looked like the better team on the ice, as opposed to just stealing one from a better team.

The last game of the week against the Anaheim Ducks was an ugly one, but at the end of the night, the Kraken walked away with a regulation win and two more points in the standings. The Kraken grabbed two goals early, but even when it was 2-0, the team looked sloppy at times and gave the Ducks multiple good chances. It was beginning to feel like one of those games where Seattle looked like the better team, but somehow the opposition was going to win. That was not the case, though, as Daniel Sprong scored a goal early in the third and the boys would batten down the hatches the rest of the way to earn a 5-4 Kraken win. It’s better to win ugly than it is to lose pretty.

How good are they?

I received a text from a buddy in Minnesota asking if the Kraken are for real. I responded with the same response I give most people when they ask me about the team. Their strength is their depth, and they have three second lines, one third/fourth line, and a solid blue line. They are a playoff team, and based on their play in November, they have proven they can play with anyone. In an illustration of their balance, the Kraken have 13 players that have three or more goals on the season. That is tied for the most three-plus goal scorers in the NHL.

We still have a long way to go before the playoffs, but if the Kraken continue to bank these standings points, you might as well start saving for playoff tickets. I cannot wait to see what kind of atmosphere we can create for a playoff game at Climate Pledge Arena.

I am paraphrasing a bit here, but last week, a reader brought up some concern about the sustainability of the performance of the team. The reader referenced the fact that the Kraken have won so many one-goal games and that maybe the strong goaltending won’t last all season.

I thought it would be an interesting thing to explore, so I investigated the goal differential a bit. To start, I did not find anything of interest around the one-goal games. Seattle has five one-goal wins and six one-goal losses. 55 percent of the Kraken’s games have been decided by one goal. That is good for fourth in the NHL behind Colorado, Toronto, and Calgary. Last season, Seattle was fourth from the bottom with 33 percent of their games being decided by one goal. When looking at the data from last season and through the early stages of this season, there does not seem to be any indicator that there is a correlation between successful teams and their performance in one-goal games.

It is obvious that goaltending, specifically Martin Jones, has been a big contributor in Seattle’s team success to date. According to Evolving-Hockey.com, Jones has saved 2.85 goals above expected, which is slightly above average but not the kinds of numbers that would indicate he’s propping this team up on his own. Here is a breakdown of all Kraken goalie performances by game number.

It is not exactly earthshattering to say that the Kraken tend to win games when the goalie plays well. You can say that about every team, but it is nice to see that they have won a few games when the goalie did not play particularly well, specifically Daccord’s start in Calgary (debatable… he made some huge saves that night) and Jones’s start last Wednesday against San Jose.

With Philipp Grubauer coming back from long-term injured reserve, expect a bit of platooning with Jones and Grubauer. The team will need both goalies the rest of the season to be successful.

If you want more on Jones’s performance on the year, check out Alison’s breakdown here.

There were a lot of nice goals scored by the Kraken, but I had to choose one. Bjorkstrand’s patience here is a thing of beauty.

You don’t see that everyday

Let’s not forget that Alex Wennberg made scoring off his back cool.

Vitek Vanecek (NJD) – The “former” Kraken posted a .943 save percentage with two wins over three games including a Saturday night performance where he saved 37 of 38 shots against the Washington Capitals.
Kirill Kaprizov (MIN) – He has seven points over three games with 19 shots on goal. Minnesota is slowly clawing back into playoff position.
Andre Burakovsky (SEA) – Burky has six points in six games and currently leads the Kraken with 21 points.

The Kings are still looking for redemption against the Kraken after losing the first two games between the teams this season. This is starting to heat up as a division rivalry with neither team liking the other one. The Kings and the Kraken could be competing for the second and third spots in the division all year.

Arthur Kaliyev – The 21-year-old winger is really starting to hit his stride in the NHL with ten points in thirteen games in November.
Jaret Anderson-Dolan – The former Spokane Chief had two points on Friday night in a game against the Sharks and has started to get more playing time as of late.

You gotta love the Tim Ohashi revenge game. The Capitals have been struggling to get their footing this season as they sit in sixth place in the Metropolitan Division.

TJ Oshie – The Mt. Vernon native and former product of the Seattle Junior Hockey Association did not get to play in the Capitals lone game at Climate Pledge Arena last season. He was someone I often promoted during the NHLtoSeattle campaign and still has a lot of affection for the area. I am looking forward to seeing him play in Seattle on Thursday.

Marcus Johansson – Johansson was a highly resourceful player for the Kraken last year and exceeded expectations for a guy that was signed for a league minimum late into the free agency period. He has five goals over 23 games this season for the Capitals.

The Panthers appear to be a sleeping giant in the Atlantic Division, sitting in fifth place right now. They are going to get hot at some point, but let’s hope it does not begin until mid-December. Fun fact, the Panthers have never beaten the Kraken.

Matthew Tkachuk – The offseason acquisition leads Florida in points with 27 and nastiness (PIMs) with 37. He is the type of player you love if he is on your team and hate if he is playing against your team. Either way, he is entertaining.

Spencer Knight – There is no guarantee we will see Knight in net, but he is currently outperforming his counterpart Sergei Bobrovsky. Knight is generally thought to be the future of USA goaltending in international tournaments. If the NHL ever returns to the Olympics, Knight is almost a lock to be one of the goaltenders.

Last year, the Kraken did not get their 29th point until Jan. 23, which is 20 games longer than it took this season.