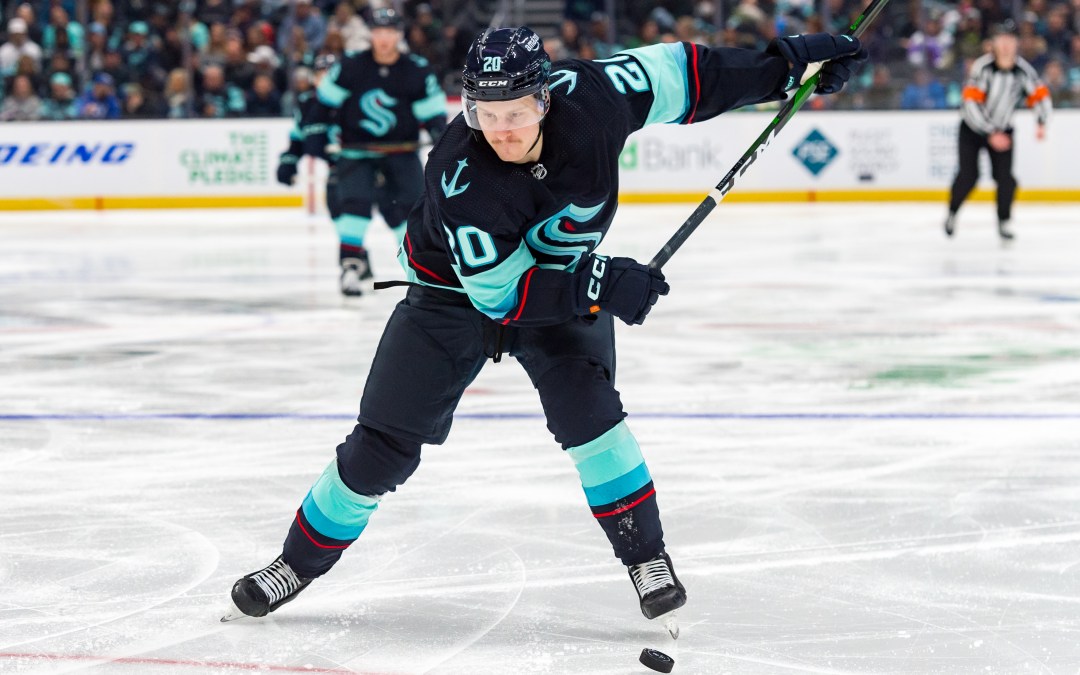 If your early season belief in the Kraken waned in December, perhaps it has been reinstated now. After being blown out by the Oilers at home to close out 2022, Seattle has started the 2023 calendar year with three impressive full-team wins. The most recent Kraken victory came in convincing fashion against the high-flying Toronto Maple Leafs in their barn on Thursday.

Good feelings are continuing to build back up around this club, which seems to have put its December bad habits in the rearview and once again looks confident playing in front of goalie Martin Jones.

The win is Seattle’s first ever against Toronto and also gives coach Dave Hakstol his first victory against the club for whom he served as an assistant coach two seasons ago.

Here are our Three Takeaways from a stirring 5-1 Kraken road win over the Maple Leafs.

Takeaway #1: A bad first period on paper was actually great for the Kraken

Toronto came out flying in the first period and at one point had an 8-0 advantage in shots on goal. Yet, the Kraken held firm and kept the Maple Leafs off the board, living to fight another day (or in this case, another period).

Sometimes when you’re playing a highly skilled team like Toronto on the road, it’s easy to get caught flat footed in the early going. You have to do what you can to batten down the hatches and bide your time until opportunities present themselves. If you keep your structure and don’t panic, eventually things will settle down, and you’ll be able to push back.

That’s exactly what the Kraken did in the opening frame Thursday, and as the Maple Leafs continued to buzz, Seattle limited second chances, blocked shots, and mostly kept things to the perimeter.

“They kind of jumped on us at the start of the game,” said Jones. “I thought we did a pretty good job kind of weathering the storm a little bit, they got a couple chances, but once we got our legs and started checking, started skating, we were able to control a lot of the play tonight.”

“We weathered the storm,” said Hakstol. “The first 10 minutes, they were skating through the neutral zone… They had a lot of speed and pace coming through, but we were able to— you know, we weathered that.”

Hakstol also called it “a dangerous way to start a hockey game,” but the Maple Leafs did eventually ease off the throttle in the second half of the period, and that set Seattle up to go gangbusters in the second.

The Kraken got a lot of help in the first period from Jones, who stopped all nine of the shots he faced in those first 20 minutes.

“Jonesy was a big part of that,” Hakstol said. “To be able to get us through that portion— that was pretty important for him to help us do that.”

Just one game after the Kraken hung four second-period goals on Stuart Skinner and the Edmonton Oilers, they did the exact same thing to Matt Murray and the Toronto Maple Leafs, proving again that patience pays off.

Eeli Tolvanen got the scoring started, blasting a power-play one-timer past Murray at 7:02 of the second. Much like on his goal on New Year’s Day against the Islanders, Vince Dunn laid a soft pass right into Tolvanen’s kitchen. Tolvanen unleashed another howitzer that blew Murray’s hair back as it hit the Toronto twine, making it 1-0.

Tolvanen is quite the story. Scratched in seven straight games after being claimed from Nashville, the Kraken are now 3-0-0 with him in the lineup. He seems to have single-handedly fixed the team’s power play woes by adding a left-shot weapon, and he now has two goals and three points in three games. How does Seattle *not* continue putting him in the lineup moving forward?

After Tolvanen’s goal, John Tavares got Toronto on the board at 10:54. But Vince Dunn got the ever-important response goal 14 seconds later, and Seattle never looked back.

Our favorite goal of the night came at 17:25. Adam Larsson slung the puck around the wall behind Seattle’s net to Dunn. Dunn moved it along to Jaden Schwartz, who heard Jared McCann screaming for the puck in the neutral zone. Without even looking, Schwartz somehow hit McCann in stride, who flew over the blue line and beat Murray with a no-doubter.

It was a pretty play and another shining example of McCann rubbing Toronto’s nose in its decision to acquire him in a trade from Pittsburgh and then immediately expose him to Seattle in the Expansion Draft.

Newly minted NHL All-Star, Matty Beniers, rounded out the second-period scoring with a pretty goal of his own, fielding a partially whiffed Jordan Eberle shot, spinning, and rifling it past Murray to make it 4-1.

This could be the game plan for the foreseeable future, folks. Seattle loves bottling teams up with the long change in the second period, and as long as it can get through the first and stay in contact with the opposition, watch out for the fellas in that middle frame.

Thursday was a game for big-time performances, as the Kraken waited out and eventually outgunned a star-studded Maple Leafs team.

As the game went on, it was as if a relay baton was being handed from player to player, with said baton signifying which player would carry the team for that portion of the game.

It started with Martin Jones, who stood tall during the early onslaught and gave his teammates a chance to get things rolling in the second period. The 26-save victory brought Jones to a remarkable 17-5-3 record on the season, and it represented his third straight quality start and his third win in as many tries.

From there, Jones handed the baton to Tolvanen, who kindly shared it with nine other point scorers on the night.

The top defensive pairing of Dunn and Larsson was especially impressive when it was their turn to carry the baton. Dunn set up the Tolvanen goal, scored the response goal that Hakstol called the “turning point” of the game, and had the secondary assist on the beautiful McCann goal.

Larsson saw his seven-game point streak snapped, but he started that play that created the McCann goal, led the team with six shots, and was outstanding defensively in a whopping 26:58 of ice time.

That was a heckuva win against a heckuva team. Let’s see if Seattle can keep it rolling on this long road trip when it visits Ottawa on Saturday.