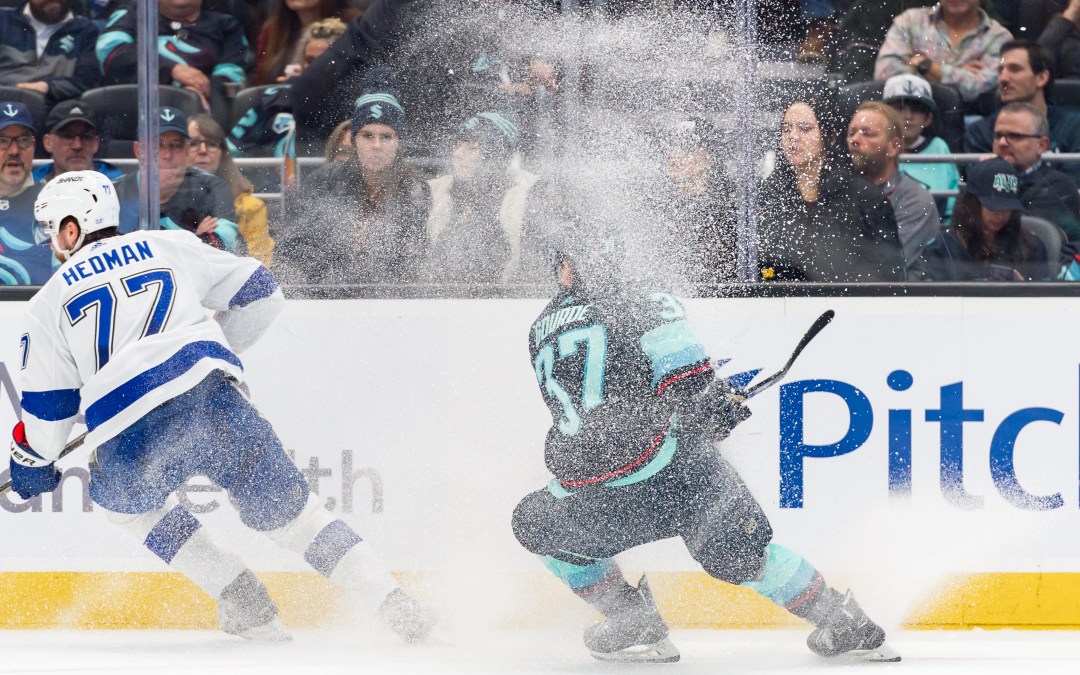 The Seattle Kraken players and their head coach were not hanging their heads after losing 4-1 to the Tampa Bay Lightning Monday afternoon. Even with a perfect seven-game road trip in the rearview, you just knew coming in that this was going to be a tough one, and although the result wasn’t what the group wanted, Seattle performed admirably.

Seattle stayed within reach of the Lightning for the entirety of the game, and if it could have gotten things going offensively just a little earlier, we could have seen a ninth consecutive victory.

Alas, the win streak was snapped at eight, as the Kraken dropped the first game of this odd set of back-to-backs with travel.

Here are our Three Takeaways from a 4-1 Kraken loss to the Lightning.

Takeaway #1: No excuses, but also there are lots of excuses

Vince Dunn, who scored Seattle’s lone goal and extended his career-best point streak to seven games, said there were no excuses for a relatively slow Kraken start Monday. “We had a whole day yesterday, we had the morning off this morning,” Dunn said. “So, we’re at home, we’re in our beds. There’s no excuse why we come out a little flat.”

BUT… It was plain to see the deck was stacked against the Kraken for this one. The first game after a long road trip is always a tough one, but that wasn’t the only thing working against the group. Add in a rare 1 p.m. start time, no morning skate, a very tough opponent, and the comedown that surely followed a record-setting perfect seven-game road trip, and the Kraken were ripe for a loss.

“That’s part of the NHL schedule, right?” Hakstol said. “It’s not one you look at on the schedule and say, ‘Well, this is going to be an easy one to be at the top of your game.’ But I felt like our group was good. They were ready to go.”

Predictably, the home side looked slow in the first period against a Tampa Bay team that was buzzing and pumped 15 shots on Philipp Grubauer. Seattle did well to keep most opportunities to the outside, and Grubauer came up big to bail them out a few times.

The Bolts broke through late in the first period, though, after what looked like an opportunity to clear the puck bounced right off Ryan Donato and onto Corey Perry’s stick. Perry fed Ian Cole at the point, who blasted away. Cole’s shot was off target, but Pierre-Edouard Bellemare got his stick on it and redirected it around Grubauer.

Keeping the deficit to just one goal after that frame was a small victory that made us think we might see a breakout in the second period. But the Kraken didn’t generate like they did on the road trip, and Nick Paul’s goal 6:44 into the third would end up being enough for the Bolts.

Dunn had an unfortunate unofficial assist on Paul’s goal after he lost control of the puck behind Seattle’s net. He joked that he made up for it with his third-period goal that got Seattle back within one. “Goals at home are always big,” Dunn said. “It gets the crowd back into it. For myself, I definitely owed the boys one by letting that second goal get through me there.”

Coach Dave Hakstol summed up the afternoon well. “In the first period, our bigger issue was coming out of the zone,” Hakstol said. “The second period, we didn’t shoot a whole lot of pucks inside. They’re a tough team to get inside on. They box you out early, so you got to find a way to get inside and win that race inside early, and then shoot pucks inside. We weren’t able to do that. We did a little bit more of it in the third.”

Onward and upward for the Kraken, who now have the pleasure of going right back out on the road to play Connor McDavid and the Oilers again on Tuesday. No excuses.

When you pay close attention to a particular team, it’s easy to nitpick its performance and hang the outcome of a game entirely on that team (in our case, the Kraken). But sometimes you need to give credit where it’s due, and the Lightning again showed why they have been so good over these last few years.

“They won two Stanley Cups, they’ve been really successful over the last couple years,” said Grubauer. “They know what they’re doing. They’re really good within their system, and then they have the skill to make plays happen outside their system.”

The Kraken, who had been scoring goals at will over the previous eight games, mustered just 12 measly shots through the first two periods.

The Bolts are just so efficient in all three zones. As soon as you get the puck, they are on you. If you’re trying to get the puck out of your own end, you better be on the money with your passing, or they will make you pay. And if you want to generate sustained offense, you simply have to outwork them. That did not happen Monday.

“They’ve got good players, and they play within good structure,” said Hakstol. “There’s big bodies that take away time and space very well.”

One of those big bodies is Victor Hedman. Every time it seemed like something was cooking for Seattle, Hedman—who we could have sworn played the entire game—would magically appear to break up the opportunity. In fact, the big Swede rejected a sure Jared McCann goal in the second period when he calmly intercepted a Donato pass in the crease. In all, Hedman led all players in the game with 26:09 of ice time and scored one of Tampa Bay’s two empty-net goals.

Hedman is just one of Tampa Bay’s many stars. The Lightning are still good.

Takeaway #3: Are both goalies going?

It seems like both goalies are going for the Kraken right now. Hakstol has again been relying heavily on Martin Jones, who was named the NHL’s No. 1 star of the week with a 3-0-0 record and two shutouts.

But, we’ve long believed getting both goalies clicking at the same time would be what gets this team to new heights. That seems to be happening right now, and the loss Monday came despite Grubauer kicking out 29 of 31 shots.

“Both guys have been good,” Hakstol said. “You look at Jonesy’s win-loss record, you look at Grubi’s performances over the past four or five [outings], he’s been solid.”

Hakstol may have forgotten about Grubauer’s start against Edmonton on Dec. 30, when he gave up three goals on five shots. But, if you take that game out, Grubauer has a .931 save percentage in his other three starts since Dec. 28. Meanwhile, it goes without saying that Jones has been stellar, earning every bit of his 21-5-3 record on the season.

Grubauer really was good Monday, and as has often been the case for him this season, deserved a better outcome. His best save came late in the second period when Mikhail Sergachev hit Corey Perry on the doorstep. Grubauer did a painful-looking full split and robbed Perry with his skate.

“No, it didn’t hurt,” Grubauer said with a laugh. “I think I got a little lucky. The stick broke too, and he shot it right into me. Obviously for [goalies], it’s a really difficult play, because you’ve got to travel so far to get back there, but got lucky, made the save, and on we go to the next one.”

If both goalies keep going, Hakstol is going to have some tough decisions to make down the stretch as to which netminder starts each night. And that would be a very good problem to have.