The Seattle Kraken are lighting up the scoreboard. Is it sustainable? 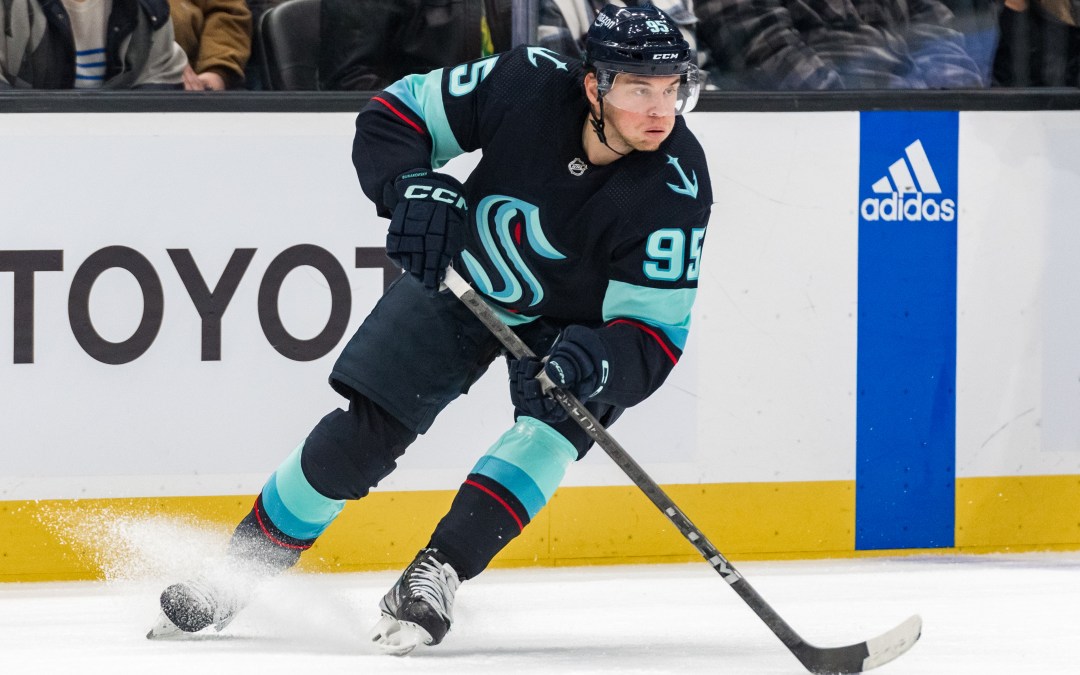 As we pass the halfway point of the season, the Seattle Kraken offense is humming. The Kraken scored six goals on their first seven shots in Chicago on Saturday night en route to eight goals in a victory.

Through games played on Saturday, Jan. 14, the Kraken rank first in the Western Conference and are tied for second overall—behind just Buffalo and tied with Boston—in goals per game with 3.76 per game. Seattle leads the entire NHL in five-on-five scoring with 2.76 goals per game. The next closest team, the New Jersey Devils, has scored just 2.45 per game in these regular manpower situations.

This is astounding for a team not only lacking in high-end star power but also coming off an inaugural season in which it struggled to generate consistent offense. Last season the Kraken tied for 28th in the NHL in goal scoring with just 2.60 goals per game. If I told you before the puck dropped on the 2022-23 regular season that Seattle would be second in overall scoring at the halfway mark, you would have been justified in scoffing.

So how has this happened? We know that many Kraken players are contributing. Seattle has more players with eight or more goals than any other team in the league. And, as we mentioned, we know the team has found a lot of success at even strength.

The team is not generating inordinately dangerous chances either, ranking between 15th and 24th in various “expected goals for” (or “xGF”) models, depending on the source consulted. Expected goals is a metric that ascribes an expected goal probability based on league average performance for each shot the team has taken. (If you’re still lost on the concept of “expected goals,” check out this explainer from Alison Lukan.)

Finally, the team is not dominating with a manpower advantage, converting just 21.1 percent of the time (18th in the league) and tallying just 26 power-play goals overall (tied for 22nd in the league).

This leaves only one explanation for the scoring: The team is shooting the lights out of just about every arena it plays in. And, sure enough, the team’s 12.62 percent shooting percentage is the highest in the league. The next closest team, Buffalo, has an 11.92 percent shooting percentage. The average team in the 2022-23 season is shooting 10.09 percent. Assuming 30 shots on goal in a game, Seattle’s advantage over the average team is the difference between scoring 3.8 goals per game versus 3.0 goals per game.

This is huge. It is the margin between a lot of wins and losses. Last year Seattle scored on just 8.95 percent of the shots it took, and that season ended with just 60 standings points.

What do we make of all of this? It turns out shooting percentage is very prone to “narrative.” “It’s just a handful of lucky bounces,” one might say; “It is not sustainable.” Another could look at the same data point and conclude the team has great shooters; this is a skill and no reason to think it will just disappear.

This is the so called “Jarny-Burky” conundrum John Barr, Darren Brown, and Andy Eide discussed on Episode 222 of the Sound Of Hockey Podcast.

Sure, the Kraken’s offensive success this season has been driven in large part by a much improved shooting percentage. But is it luck? Or is it because the Kraken upgraded their shooting talent? For example, the team replaced career 12.0 percent shooter, Calle Jarnkrok (“Jarny”), with a career 14.4 percent shooter in Andre Burakovsky (“Burky”)—hence, “Jarny-Burky.”

This rudimentary approach suggests that the Kraken may be getting quite “lucky” in their results this season, but it does not account for many factors that may explain this difference. For example, scoring and shooting percentages are up across the board in recent seasons. And looking at a player’s relative shooting percentage alone does not account for the relative quality of the player’s chances this year versus the remainder of the player’s career. Is there anything else we can try?

Money Puck has tracked a statistic it calls “shooting talent above average” that is potentially illuminating, even if it too has some limitations. The statistic is compiled by comparing a player’s historical goals scored against the player’s projected “expected goals” for his shots.

If a player—like Alex Ovechkin, for example—is consistently scoring more frequently from areas of the ice than how he is “expected” to perform, one can reasonably surmise that the player is an above-average shooter. The opposite suggests a below-average shooter. Money Puck takes this player-specific historical performance, regresses it, and assigns a talent adjustment to his shots when calculating that individual’s expected goals. This produces what the site calls “shooting talent-adjusted expected goals.”

Shooting Talent Above Average: A player’s ability to score more goals than an average player given the same scoring opportunities. This is based on a player’s historical track record of exceeding their expected goals. A player with a shooting talent above average of 20 percent would have a 12 percent chance of scoring a goal on a shot with expected goal value of 0.1.

Per Money Puck, Alex Ovechkin has 29 goals on shots worth 24.3 unadjusted “expected goals.” Has he been lucky? Money Puck suggests the answer is no. Turns out, his “talent-adjusted expected goals” is precisely 29.0. In other words, his shooting is right in line with what we would anticipate him to deliver.

Money Puck compiles this data at the player level. But one could then aggregate the data at a team level by gathering it for all players who have taken the ice in 2022-23. Then the task is to interpret how much of the delta between a team’s actual goals scored and xGF is “luck” and how much is “skill.”

I conducted this study and it returned some very intriguing outcomes. That said, before we proceed, I want to inject a healthy degree of humility and skepticism into the discussion. This approach lends the veneer of precision to this analysis that is not warranted. If a team has 138 goals on 124 expected goals and 128 talent-adjusted expected goals, I don’t think we want to suggest that exactly four of the goals scored above expected were skill-related and 10 were luck-related. Instead, it’s fairer to say, the team is above average at shooting so it could be expected to outperform its unadjusted expected goal totals.

Furthermore, it is fairly presumptuous to call currently unexplained outcomes “luck.” There could be a variety of explanations for why a team outperforms or underperforms its talent-adjusted expected goals, and we’ll return to a few of those at the end of this post.

With those caveats out of the way, let’s get to it. Looking at “skill” first, through games on Thursday, Jan. 12, 2023, the Kraken generated the fourth largest positive differential between their team expected goals and team talent-adjusted expected goals. The team had generated 129.9 expected goals, but 139.3 talent-adjusted expected goals, a 9.4-goal differential. This shooting talent value added is behind just Tampa Bay (13.1), Washington (11.7), and Pittsburgh (10). In other words, when comparing the shots actually taken by all players in the NHL, Seattle’s players generated the fourth most shooting value over average.

Looking now beyond skill, the Kraken had the third largest positive differential between their team talent-adjusted expected goals and their actual team goals. The team has 139.3 talent-adjusted expected goals, but 151 actual goals (as of the Jan. 12 games), an 11.8 goal differential. This differential is third in the league behind just Buffalo and Vancouver. This suggests that even when adjusting the value of every team’s shots for the shooting talent of the players on those teams, the Kraken have still over-performed expectations by the third most in the league. This large delta suggests the team has been quite lucky. (Following the Chicago game, I’d expect this gap grew.)

Are the Kraken both lucky and good?

Before concluding, I want to reiterate that there are limitations to the approach described in this article. The Money Puck talent adjustment method will not capture the shooting talent of rookie players since there is no historical track record for comparison. And even if there is a track record, a player’s historical over-performance of his expected goals may not be indicative that the strong scoring is going to continue. It certainly does a better job of accounting for context than our original shooting percentage method, but it’s still imperfect.

That said, I think we can say confidently that the Kraken have been both exceptionally lucky and exceptionally good with their shooting this year. These results confirm our suspicion that at least some of Seattle’s goal scoring success has been the product of good fortune and cannot be expected to continue at this breakneck pace. On the other hand, there is no reason to expect that Seattle will regress to an average shooting team. The skill is there to perform at or near the top of the league in shooting percentage moving forward. (Particularly with the recent addition of Eeli Tolvanen.)

When accounting for shooting talent, Seattle’s xGF ranks 16th in the league according to Money Puck—roughly average. Middle of the league may be a reasonable expectation moving forward. (That said, Money Puck’s unadjusted expected goal model is more pessimistic on the Kraken than most. I’d probably put the Kraken somewhere in the 12-to-16 range in overall scoring moving forward.) If the Kraken want to stay at the top of the league in scoring, they’re likely going to need to do more in other areas, such as improving shot quality or invigorating the power play.

What do you think? Is Seattle’s offense sustainable over the second half of the season, or should we expect some significant regression?