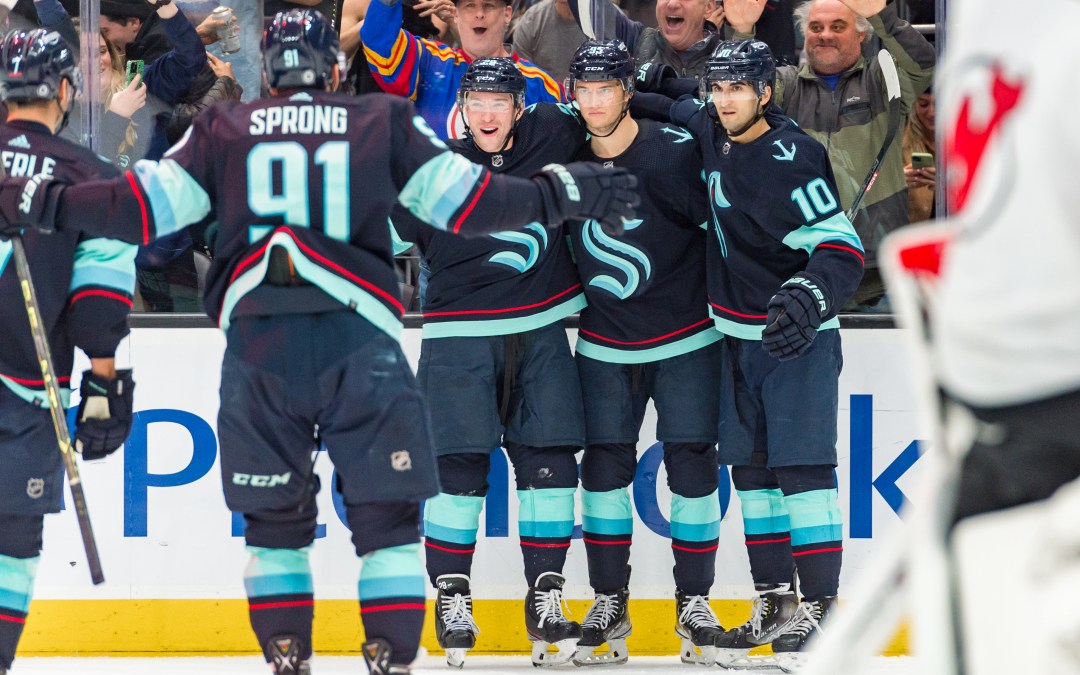 The Seattle Kraken played their 45th game of the season Thursday against the streaking New Jersey Devils, one of the best teams in the Eastern Conference. When Andre Burakovsky circled around the offensive zone in overtime and loaded up a shot that squeezed through the pads of Mackenzie Blackwood, the Kraken officially took over first place in the Pacific Division from the Vegas Golden Knights.

So, did you expect the Kraken to be in first place 45 games into the season? Yeah, neither did we.

“I don’t know where we were at this point last year points-wise, but it goes to show that we took a big step as a team and as an organization,” said Ryan Donato, who was one of the heroes for Seattle.

This feels like one of those inflection points in the season, as the Kraken cleared a huge hurdle Thursday and now will try to put some distance between themselves and the rest of the division.

Here are our Three Takeaways from a thrilling and memorable 4-3 Kraken overtime win against the Devils.

After a hellaciously long stretch of road games (with one midday home game against the Tampa Bay Lightning mixed in Monday), Seattle came out Thursday looking rejuvenated. For a good stretch of the first period, it felt like the Kraken were doing whatever they wanted with the puck and were setting themselves up for grade-A chance after grade-A chance.

Blackwood stood mostly tall in the opening 20 minutes, kicking out 14 of the 15 shots he faced in the frame, but Ryan Donato broke through for his first of two goals on the night at 12:27.

Midway through the second, Jordan Eberle had a chance to make it a 3-0 game and put the Kraken on cruise control, but after deking Blackwood out of his jock, Eberle backhanded a shot off the post. Seconds later, Dawson Mercer got the Devils on the board at the other end, and suddenly New Jersey had life.

Sure enough, some hairy moments ensued down the stretch. With the Kraken on their only power play of the game, Mercer chipped a puck past Vince Dunn and found Erik Haula, who had gotten behind Seattle’s defense. Haula flew in and beat Martin Jones to tie the game at 6:04 of the third period.

The Kraken pushed right back with a Brandon Tanev goal at 7:51, set up beautifully by Yanni Gourde and Donato. But the comeback kids from New Jersey had a relentless push with their goalie pulled in the final two minutes of regulation, and Nico Hischier banged in another tying goal with just 1:14 left to play.

Still, the Kraken didn’t let it take the wind out of their sails, and they instead went right back to work in overtime, finishing the job with Burakovsky’s ripper through the wickets.

Hakstol said it was resilience that got his team through to the two enormous standings points. “We played a really good first period. Back and forth game from there, and just to be able to push back after the shorty, that can be a dagger at times to give up a goal like that at that time of the game.”

One thing that’s been remarkable about this team all season has been the way different guys have stepped up almost every night. Thursday, Donato, playing up the lineup to replace injured Jaden Schwartz, had the first two goals of the game and also the primary assist on Tanev’s third-period tap-in goal.

“To be honest, the first one, it was lucky that Wenny let the puck go, because that would have been offside by about four feet if he got the puck,” joked Donato. “At that point, I’m in a spot where there’s not much angle for me to shoot. I’m just trying to get it to the net as quickly as I can, and that one was pretty lucky.”

Donato added that on his second goal, which was also a short-side snipe, he was planning to pass but was forced to shoot by New Jersey’s backcheck. He got the shot away quickly, and again beat Blackwood.

“Those two goals, that’s the story of our year, right?” Hakstol said. “It’s the story of our team, somebody stepping up and scoring big goals at the right time. We had had a ton of good opportunities at that point in time [in the first period], both in tight and some different looks, so that first goal was a real big goal in the hockey game to be able to break through. And it was a hell of a shot.”

Meanwhile, on the back end, Cale Fleury slid in to replace injured Justin Schultz, playing his first game in more than a month. Fleury looked calm and confident all night and got rewarded with his first ever NHL assist. That was his first NHL point since the 2019-20 season when he scored one goal with the Montreal Canadiens. Ironically, both his goal in his first season and his assist Thursday came against the Devils.

“I knew it was both against these guys,” Fleury said with a smile. “So I guess they’re my favorite team to play against.”

Fleury’s night was downright heartwarming. This is a guy that has had a tough go with the Kraken this season, getting scratched in 38 out the team’s 45 games. We’ve seen him bag skating and working on his own skills at almost every morning skate and practice, only to show up and watch the games in street clothes.

But after he played a solid game on the blue line and even pitched in offensively against the Devils, Fleury was all smiles.

“It’s pretty tough, obviously, being in the situation I have been,” Fleury said. “But it’s something that kind of just stays in the back of your head every day when you’re doing the skates that I’ve been doing, so I think it’s kind of easy for me to stay into it.”

Hakstol liked what he saw from Fleury as well.

“It’s four or five weeks [since his last game], it’s a long time,” Hakstol said. “But he came in tonight, and it was pretty seamless. He did a good job. He looked confident right away, and you can see that when a guy’s moving and he’s gapped up and he’s physical and he’s confident with the puck coming out of the zone.”

As the Kraken finally begin to sustain injuries after a very healthy first three months, they will need their depth players to step up even more than they have before. Thursday’s performances by guys like Donato and Fleury brought hope that this team can withstand absences from key players.

Takeaway #3: The Kraken are in first place

Just as we all predicted would happen back in September, the Seattle Kraken officially took over first place from the Golden Knights Thursday, as Vegas lost 3-2 to the Detroit Red Wings.

It’s mind boggling to think where this team was last season and how far it has come to develop a winning culture and a belief that they can beat any team in the NHL.

“It tells me the work that the group in here has done,” Hakstol said. “That’s the bottom line. That’s what we’re here for; you’re here to compete for a playoff spot and positioning, and No. 1 on the list, competing every night for points that go into the bank towards a playoff berth.”

Now, the big question is whether Seattle can fend off teams like Vegas, Los Angeles, Edmonton, and Calgary the rest of the way and remain at the top when it’s all said and done.

“We’re playing against good teams and every point matters now,” said Donato. “I think we climbed to the top of the standings in our division with that game, but you know, there’s going to be a lot of teams trying to knock us off the top.”