Kraken slow the Avalanche but fall in a shootout 2-1 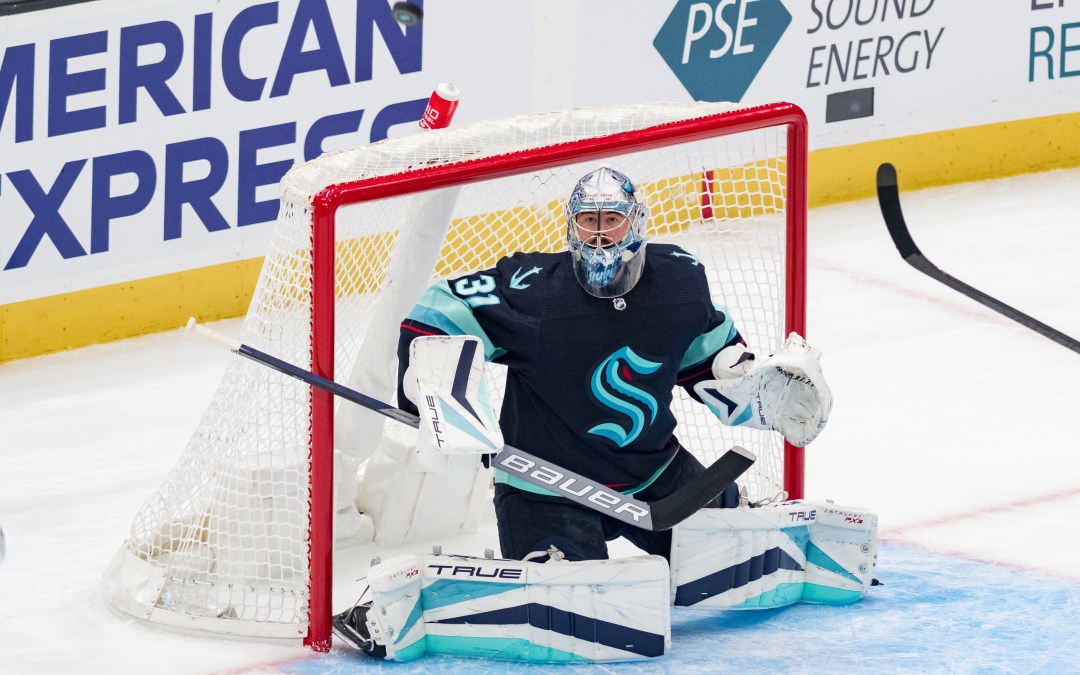 The Seattle Kraken secured one point in the standings with a shootout loss to the Colorado Avalanche on Saturday night at Climate Pledge Arena. Alex Newhook for Colorado and Ryan Donato for Seattle scored within a 68 second span in the second period, but otherwise the teams traded checks and agonizingly close chances without breaking through. In the shootout, Nathan MacKinnon (ever heard of this guy?) scored the only goal by either side and lifted the reigning Stanley Cup Champions to victory.

Despite the setback, Seattle has amassed a 9-2-1 record and secured 19-of-24 potential standings points since calendar turned to 2023. With 59 points overall, the Kraken currently sit just one point back of the Vegas Golden Knights (with one game in hand) for first place in the Pacific Division. The Kraken could surpass last year’s full season point total (60) with a win over the Vancouver Canucks on Wednesday, January 25.

What’s our headline coming out of this one against Colorado? Who is trending up? Who isn’t? What’s next for the team? Let’s dive in.

Main takeaway: The Kraken are a resilient group right now

After Seattle’s 4-3 overtime win over the New Jersey Devils on Thursday night, the word that stuck in Coach Dave Hakstol’s mind was resilience. That descriptor was apt regarding his team’s performance against Colorado as well.

For long stretches of the 2022-23 season, the Seattle Kraken have been quite fortunate in avoiding player injuries. In fact, going into Saturday’s tilt, Seattle was tied with Dallas and Carolina for the fewest number of unique skaters to take a shift this season (23).

Things have gotten a little more challenging recently, though. Top-six forward Jaden Schwartz had missed the last four games before this one, and second pair defenseman Justin Schultz missed Thursday’s game with an injury as well.

Those two remained out Saturday, and were joined in street clothes by another injured top-six winger in Andre Burakovsky.

Earlier Saturday, after both Burakovsky and forward Alex Wennberg missed the team’s morning skate, coach Dave Hakstol said that one of the two would be in the lineup but the other would be a game time decision. When the Kraken stepped on the ice for pregame warmup Saturday evening both were there, but so too was John Hayden, the team’s extra forward. The intrigue was resolved about 15 minutes later when it was announced that Burakovsky would be scratched and Hayden would draw in.

Missing three top-of-the-lineup players against the reigning Stanley Cup Champions, it would have been easy enough for the team to back down. They didn’t. Rather than use excuses to lose, this 2022-23 Kraken team finds ways to win (or at least stay in the game). I’ll get into it below, but the team defense in and around the slot salvaged a point from a game where a lot of things were pointing Colorado’s way. This is a good sign for the character of this team as it looks toward the stretch run.

Philipp Grubauer. The German netminder allowed just one one goal on 27 shots before the shootout. He stopped a handful of dangerous opportunities, including a slot chance from Nathan MacKinnon midway through overtime and a breakaway chance by Sam Girard moments after that. The goal he allowed was a second rebound opportunity after selling out to make two initial saves. It is hard to fault him there. Expected goal models agree that Grubauer was good against Colorado, indicating that Grubauer was likely about a goal better than average based on the shot quality he faced. That is a big game.

Ryan Donato. Donato has four points in his last two games, including three goals. Without his contributions in these two games it is very possible the Kraken would be looking at a fourth consecutive loss and a very different narrative. Donato’s goal in this one came from the outside and likely counts as one Pavel Francouz “would like to have back.” But there is no denying Ryan Donato is on a heater right now.

Daniel Sprong. With Burakovsky absent, coach Hakstol opted to keep the Yanni Gourde and Alex Wennberg lines intact, and promoted Daniel Sprong to play with Matty Beniers and Jordan Eberle. John Hayden skated alongside Brandon Tanev and Morgan Geekie. When asked about the decision to move Sprong up after the game, Hakstol noted that Sprong’s progress with his two-way game gave Hakstol confidence. Sprong seemingly rewarded that confidence midway through the first period with a shot block that thwarted a dangerous-looking scramble in front of the net.

Team defense good in “the house.” Adam Larsson saved a possible goal when he swatted a puck that had broken through Grubauer off the goal line in the second period. (I say “possible” only because Matty Beniers was on the spot too, and he may have been able to save it if Larsson had not done so.) This play was indicative of Seattle’s intense defensive effort all night. The team was active blocking shots and with their stick checks at the sides of the net. Grubauer called this out in his postgame interview. Without the benefit of a full tape review, I recall at least three additional occasions (beyond the one noted above) where it seemed like a Colorado empty net goal was possible only to have a Seattle player thwart the shot at the last possible moment. It was an impressive team effort, with many contributors. Larsson led the way, as he usually does.

Tolvanen-Gourde-Bjorkstrand line is in the circle of trust. Tied for the most shifts of any forward line on the team, this group started the game for the Kraken and Coach Hakstol kept going back to them in all situations. While the line did not score tonight, they were on the ice for 14 Seattle shots for and conceded just six Colorado shots in return. Eeli Tolvanen matched his season high with four shots on goal, Yanni Gourde let the entire team in total shot quality per MoneyPuck, and all three played with strong pace.

Injuries. The nature and origin of Andre Burakovsky’s injury is unknown at this point. He scored the game winning goal in overtime Thursday night and spoke to the media then. Jaden Schwartz and Justin Schultz remain day-to-day. The team currently has no healthy extra skaters. On the other hand, it does have the luxury of a few days to sort through its roster with the team’s next game coming on Wednesday, January 25.

Team scoring; points streak. Remarkably, Ryan Donato was the only Kraken player to register a point on the scoresheet in this one (his second period goal was unassisted). This means that Vince Dunn’s team-high nine-game point streak came to an end. Dunn will look to start a new point streak when the Kraken take the ice against Vancouver.

Parting thought: time for some well-deserved rest and relaxation

After a grueling stretch to begin January that saw 12 games in 21 days, with eight of those games coming on the road, the Kraken now have three days off before they take the ice again to play a game. Coach Dave Hakstol noted postgame that he thought his team could benefit from the break to get away and re-charge.

First thing is first though: the team will take the ice at Climate Pledge Arena Sunday at 2:00 pm PT for the Super Skills Showcase. Per Hakstol, the team will then have the day off Monday before returning for a practice at the Kraken Community Iceplex on Tuesday.