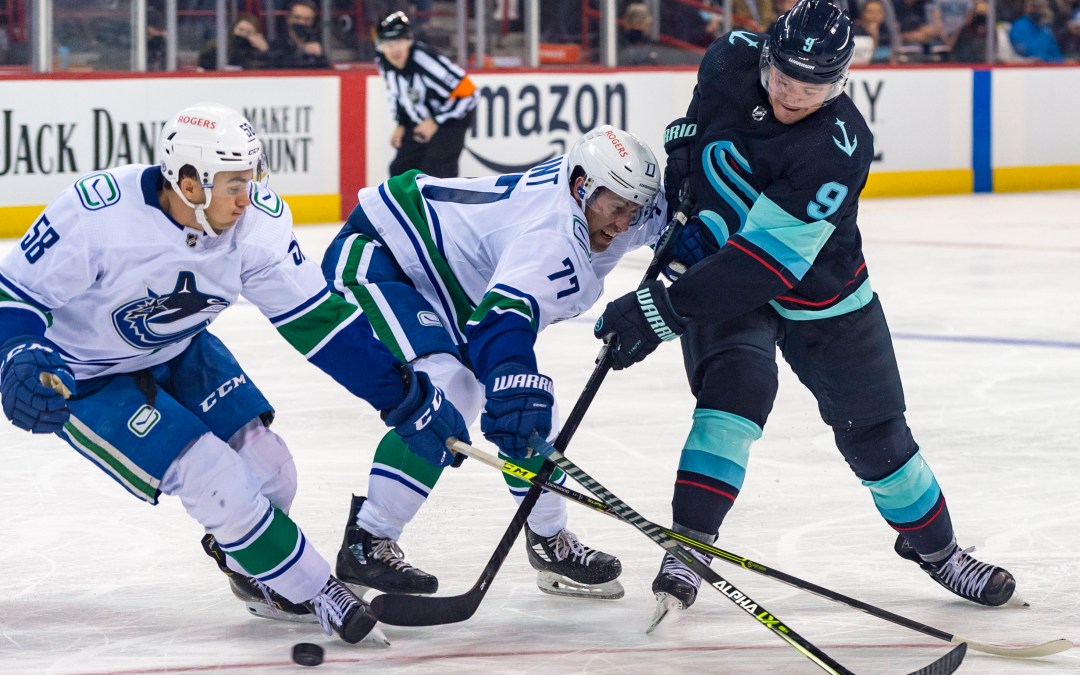 Kraken forward Ryan Donato has had a good week. Playing on an elevated line, the 26-year-old forward has taken advantage, scoring three goals with an assist in Seattle’s last two games, but he isn’t getting a big head about it.

“So you just try and stay as even keel as possible. I’ve learned that when you’re in the same position and you’re feeling low on yourself. You can’t get too low and then use the scoring… and get too high.”

For the second straight season, Donato has shown that he is a versatile player for Seattle. During summer’s training camp, coach Dave Hakstol mentioned that Donato was a player he could count on no matter what line or role he was asked to play.

It’s been more of the same this season. They need him to fill in at center on the fourth line? Done. There’s a need on Yanni Gourde’s wing for a few games? No problem.

“I think it’s difficult, but I mean, you prepare the same way you would with any game, right?” Donato said. “I mean, if you ask guys here, they think I’m superstitious, but I think it’s more of a routine, and I try and keep the routine the same. So no matter what the situation is, who I’m playing with, where I’m at, where I’m at in the lineup, what position, I always feel the same.”

His pregame routine is somewhat simple, it does not include any chants or strange foods at all but still prepares him to play many different roles on the ice.

“The pregame routine warm up, stretch,” he said. “All what I do on the ice, like it doesn’t change. I try and stay consistent. So if I know if I play bad, it’s not on anything I did during the day. It’s more something I wasn’t doing during the game.”

Donato is one of the nicest people you could hope to meet in hockey. He’s laid back and easy going yet at several times this year and last, he’s raised the ire of opponents. He doesn’t play dirty but has been involved in a few post-whistle scrums.

“I tend to stir the pot a little bit,” he said with a smile. “I don’t really go out of my way to do it. But I think there’s a lot of guys on our team that don’t shy away from it either. And, you know, kind of sometimes if you get into those moments it maybe even gets you into the game mentally and physically a little bit and sometimes if you’re not into it, that’s a way to get back into for sure.”

Kraken get a practice in before playing Vancouver

With a packed January schedule, the Kraken have had almost no practice time. They have three home games this week before getting time off for the NHL All-Star break.

Will it be beneficial?

“Well, we’ll find out tomorrow,” Hakstol said after practice. “I mean we were tired. We look like a tired hockey team a couple days ago against Colorado. The effort was really good, but you can see some of the fatigue in our game. So we gotta recharge the batteries here and make sure we’re ready for a push here for the next four days.”

The first test will be Wednesday night against the Vancouver Canucks who were awash with turmoil this week as they officially fired coach Bruce Boudreau and hired Rick Tocchet who will be coaching his first road game with Vancouver on Wednesday.

Hakstol, as he often repeats, said that the Kraken were worried about their game and that while Vancouver might ‘tweak’ some things, it won’t matter as long as Seattle is on point.

There were some notable absences Tuesday for a practice that Hakstol described as one focused on ‘pace and execution.’

Jaden Schwartz again missed practice, and Hakstol said he does not expect him to play Wednesday. Defenseman Justin Schultz, who has missed the last two games for the Kraken, is now considered out week-to-week meaning that Cale Fleury should get an opportunity for more playing time.

Forwards Yanni Gourde and Andre Burakovsky both were kept out of practice, and Hakstol said they would be game-time decisions. With the injuries, forward John Hayden was recalled from Coachella Valley after being sent down on Saturday.

Seattle has been one of the best road teams in the NHL this season, with a 16-5-2 record. In what can only be described as a head scratcher, they’ve only been lukewarm at Climate Pledge Arena with an 11-9-3 record.

With a loud and loyal crowd and last change greeting them at home each night, it would make more sense if the records were flipped.

“I think we obviously should be better at home right?” Donato said. “Like the way we prepare, you have more advantage of being at your home rink, fans and all that stuff. I can’t say we can put a pin on what would be the reasoning that would be like that, but yeah, so not too sure.”

The Kraken have three chances this week to improve at home. After the Vancouver game on Wednesday, they will host Calgary on Friday and the Columbus Blue Jackets Saturday. Climate Pledge should be packed and there should be no excuses.

There was a special guest at practice Tuesday. For the first time, the Kraken hosted the Make-A-Wish Foundation of Alaska & Washington and created a special moment for young Jackson Boboth, who had his dream of skating with the Kraken granted.

Boboth, a goalie, was on hand at Kraken Community Iceplex for practice and worked with both Philipp Grubauer and Martin Jones on the ice.

His family joined him for a fun morning. Afterward, Grubauer helped Jackson take his goalie gear off. Boboth had his own personal stall in the dressing room with a nameplate and addressed the media once out of his gear.

“I think he’s next man up,” Hakstol said. “He looked pretty good out there today. I wouldn’t be shooting at his glove, I can tell you that. He’s just rock solid in there.”

It was the first time that Make-A-Wish has worked with the Kraken and hopefully not the last.