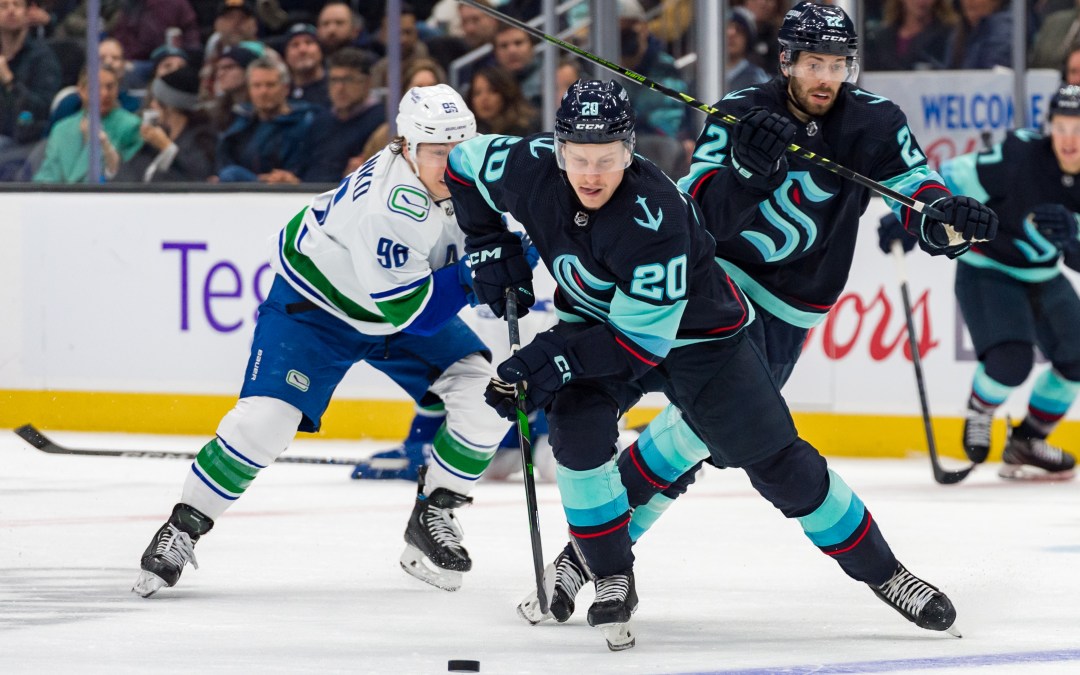 The Kraken got another proverbial monkey off their backs Wednesday with a dominant 6-1 win over the Canucks, a team that has been a bugaboo for Seattle since its inception. Rejuvenated after three days off, the Kraken came out flying in the first period and didn’t look back against their embattled neighbors to the north.

“That’s a great win for our club,” said Vince Dunn who had two assists and set a new career high for points in a season. “We definitely owed them over the past two years, so we showed a lot of character throughout the game.”

The victory—which may have come with a significant cost (see Takeaway #3)—solidified Seattle’s position in first place in the Pacific Division. The Kraken are level in points with the Vegas Golden Knights but still hold two games in hand. They also have now surpassed their point total for all of last season, and it took just 47 games.

Here are our Three Takeaways from a resounding 6-1 Kraken win over the Canucks.

Takeaway #1: How is that the first time the Kraken have beaten the Canucks?

The Kraken dominated that game from start to finish. You could tell they were playing with a little chip on their shoulder after going 0-5-1 in their first six all-time meetings with the Canucks, including giving away what should have been an easy win on Dec. 22 in Vancouver.

Oliver Bjorkstrand got on the board first at 7:57 when he found an Adam Larsson rebound in the slot and deposited it behind Martin. Alex Wennberg followed that up at 9:46 by finishing off a nice passing play on the manpower advantage. Dunn passed to Jared McCann at the top of the left circle, who hit Jordan Eberle in the slot, who tipped it to Wennberg, who redirected it past Martin.

From there, the game was on the rails and felt like a no-doubter all night long.

After watching that game, it’s hard to fathom that it took so long for Seattle to get a win against Vancouver. The organization has been a train wreck, especially these last couple seasons, yet somehow the Kraken just hadn’t been able to figure out those pesky Canucks.

“We haven’t liked the results, obviously,” said Hakstol.” I said before the game the results from last year mean nothing to this group. Maybe I overstated that a little bit, I mean they’re the nearest team, but the most important thing is this is Game 3 this year… We had one point up in Vancouver, and these are critical two points.”

For the second time in two seasons, Vancouver fired its coach in the middle of the year, and we’re starting to think the problem is not actually the coach. The turmoil in that market is real, and it comes with good reason.

Seattle has had several chances to beat Vancouver, only to come up short in the third period.

“They never give up,” said Dunn. “We’ve been up in a lot of those games, and we’ve sat back and they’ve taken advantage of us. So tonight was a complete game for us, all 60 minutes. We found ways to gain back momentum when we needed it.”

We will note the Canucks played the Blackhawks Tuesday, so they were on tired legs and should get a little bit of a pass there. Still, if you’re new coach Rick Tocchet, you can’t be too thrilled with the team you just inherited. Oh, and if you’re Tocchet, you probably didn’t appreciate the “Bruce, there it is!” chants that rang down from the Climate Pledge Arena stands in the third period.

Takeaway #2: The Tolvanen-Gourde-Bjorkstrand line is legit

We are loving what we’re seeing from Seattle’s third line of Eeli Tolvanen, Yanni Gourde, and Oliver Bjorkstrand. While all four lines were clicking Wednesday, that trio was especially impactful and looked dangerous every time it was on the ice.

“They’ve got some good momentum, right?” said Hakstol. “They continued that tonight. They buzz around, they’re doing it with pace, with tenacity, but there’s chemistry there.”

After scoring just two goals in 13 games, getting scratched repeatedly, and finally getting waived by Nashville, Tolvanen now has six goals and eight points in 13 games with Seattle. He’s been a key cog in the machine that is the Kraken third line.

Tolvanen’s goal Wednesday was of familiar fashion, a rocket one-timer from the top of the slot. Gourde teed him up with an easy pass to lean on, Bjorkstrand created a screen in front, and Tolvanen put his whole weight into the shot, blasting it by Martin.

Bjorkstrand added his second goal of the game at 16:15 of the second period after an impressive display of passing between Gourde and the top defensive pairing of Adam Larsson and Vince Dunn. They looked like they could do whatever they wanted with the puck, and in the end, Larsson found Bjorkstrand in the right circle. With Vancouver’s defense discombobulated after the effective cycling, Bjorkstrand had all day to pick his spot on Martin.

It’s no coincidence that Bjorkstrand seems to be finding his game since Tolvanen started getting playing time.

“[My game is] better,” said Bjorkstrand. “I think I’m creating more things, and just as a line, we’re playing really well together with Gourdie and Tolvy. So, it’s definitely nice seeing it go in.”

He still isn’t scoring at the kind of clip we would have expected from him, but Bjorkstrand has five of his eight goals since Tolvanen joined the lineup on Jan. 1.

The injury bug may have taken another big bite out of the Kraken, who had been remarkably healthy until recently. With Jaden Schwartz and Justin Schultz out of the lineup, and guys like Wennberg, Andre Burakovsky, and Gourde all being labeled as “game-time decisions” recently, Seattle is banged up right now.

And the Kraken may have taken another big blow Wednesday against the Canucks, both literally and figuratively.

Five minutes into the second period, with Seattle on the attack and the puck nowhere near Matty Beniers, all 6-foot-8, 229 pounds of Tyler Myers tossed the unsuspecting rookie like a rag doll. Beniers hit his head on the ice, and it took a pretty good bounce. He got up looking shaken up, and both referees immediately put their arms up in the air to call Myers for interference.

So, keep an eye on that. It’s easy to imagine Beniers could have sustained a head injury with the way his helmet bounced. If that is the case and Beniers misses extended time, it would be a massive loss for the Kraken and concerning for the 20-year-old who is slated to participate in his first All-Star Game next week.

Bonus Takeaway: Jackson was the No. 1 star

The Kraken rolled out the red carpet for young Jackson Boboth, a nine-year-old fan who has been battling leukemia and is part of Make-A-Wish Alaska & Washington. Not only did Jackson suit up in goalie gear and take shots at practice Tuesday, he was signed to a one-day contract Wednesday.

Again in his full gear, Jackson took the ice and was announced in the starting lineup. After the final horn sounded, he was awarded the No. 1 star of the night and got to yeet a fish into the crowd. Cale Fleury then plopped the Davy Jones hat onto Jackson’s head in the dressing room, capping off an unforgettable experience for the young man.

“It’s something that we all love to be a part of and really special for him and his family,” said Dunn. “I think the support throughout the community— you see in warmups, all the signs for him, that’s really special, and he definitely brought a little spark in the dressing room tonight.”