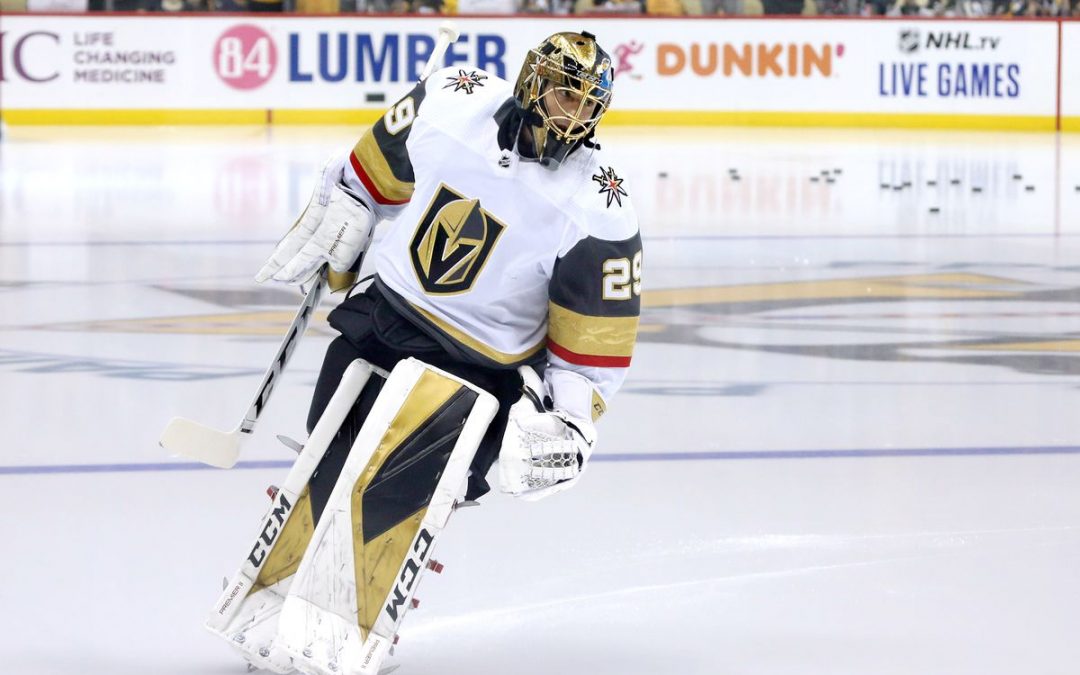 If there’s one position at which we should be able to predict NHL Seattle’s direction heading into the franchise’s 2021 Expansion Draft, it would be netminder. After all, Vegas’s impending acquisition of Marc-Andre Fleury, then 32 years old, in the lead-up to the Golden Knights’ inaugural season was perhaps the worst-kept secret in all of hockey.

Fleury was coming off a 2016-2017 season in which his Penguins had won the Stanley Cup, but he had lost his job to a man ten years his junior, and one who was making $5 million less per year in Matt Murray. Fleury’s illustrious career in Pittsburgh was quite obviously over, and there simply was no other outcome that could have transpired that offseason, other than him joining the NHL’s 31st team.

Marc-Andre Fleury’s career in Pittsburgh was obviously over prior to his selection by Vegas in the 2017 Expansion Draft. Photo credit Gene J. Puskar, AP.

Alas, at this point in time, things aren’t quite as crystal clear as to who will don the first beautiful set of custom-designed Bauer, CCM, or perhaps even Brian’s goalie gear in Seattle’s TBD colors, and lead the NHL’s 32nd team onto the New Arena at Seattle Center’s ice for puck drop in fall of 2021. In fact, with a year left to go before Seattle’s Expansion Draft, the only thing that makes the goaltender position any more predictable than, say, third-pairing left defense is the fact that the pool of options is simply smaller for backstops.

We can certainly whittle things down a bit by examining the contract situations of teams and goalies across the league. But even then, there’s just a lot of uncertainty, due to a number of outstanding scenarios that will alter the goaltending landscape a bit when the 2019-2020 season officially concludes. Nonetheless, let’s do some digging, and see if we can uncover who will be the first goalie for NHL Seattle.

For your perusal, here are all of the goaltending contract statuses, broken down by division (click each to expand):

For the sake of whittling, it’s easiest to focus on which teams will likely have a logjam in net when 2021 rolls around.

Correction: Reader Jason Katinas accurately pointed out that Igor Shesterkin is actually exempt from the Expansion Draft, because like Elvis Merzlikins in Columbus, Shesterkin has only been a North American pro for one year. So, maybe New York isn’t quite as interesting of a scenario as I initially thought.

Pittsburgh has two great young goalies in the aforementioned Murray and Tristan Jarry, who burst onto the scene this season to essentially do to his counterpart what his counterpart did to Fleury in 2016-2017. Jarry had an impressive .921 save percentage and 2.43 GAA, and sometimes looked unbeatable en route to a 20-12-1 record. It would be a little ironic for Pittsburgh to give up a goalie in the Expansion Draft for the second time in a row, but with both Murray and Jarry becoming RFA’s after next season, one will have to either be traded or exposed. My guess is that Pittsburgh will find a way to avoid Fleury 2.0, but we shall see.

Vancouver and Washington are a little different from the others in this lot. Both have bona fide starters in Jacob Markstrom and Braden Holtby respectively, and solid up-and-coming back-ups in Thatcher Demko and Ilya Samsonov. Holtby’s name almost always comes up as the next goalie to experience Fleury’s Expansion Draft fate, and that makes sense. He’s 30 years old, has Samsonov waiting in the wings, and doesn’t have a contract

beyond this season. Markstrom—who played in his first All-Star Game this season —has the exact same scenario playing out in Vancouver, except his re-signing there has generally felt like less of a foregone conclusion than Holtby returning to Washington. Frankly, though, I think Holtby or Markstrom ending up in Seattle is unlikely. It just seems farfetched that any team would sign either of these guys to extensions after this season and not figure out a way to protect the asset. If they do both re-sign with their current teams, then look for Seattle to scoop up either Demko or Samsonov.

Also worth lumping in as a potential goalie target is Arizona. Looking at the contract statuses, it’s obvious that Darcy Kuemper will be protected, but Antti Raanta’s deal is up heading into the 2021 offseason, and young Adin Hill will still be in the mix there. Raanta has had a ton of injury issues in his career, but one could see either him or Hill (or both) being available, should Seattle wish to go in one of those directions.

Meanwhile, Columbus seems like a very obvious candidate to cede a goaltender to Seattle, because after signing both of its 26-year-old backstops to extensions this season, Joonas Korpisalo and Elvis Merzlikins are under contract through 2021-2022. However, there’s a wrinkle. Because Merzlikins just started playing pro hockey in North America

this season, he’s actually exempt from the Expansion Draft. Thus, the likeliest scenario here is that Korpisalo will be protected, and instead, Latvian youngster Matiss Kivlenieks would be exposed. Kivlenieks is still intriguing, as he was thrust into action with Columbus for six games this season with both Korpisalo and Merzlikins simultaneously on the shelf. Kivlenieks performed admirably, with a 1-1-2 record, and 2.95 GAA.

Aside from the teams that have multiple contracts to juggle, there are also several goaltenders scattered about the league who will see their contracts expire in the next year. This adds to the murkiness of the expansion pool, because where these goalies land with their next contracts will certainly impact whether or not they will be ripe for Seattle’s picking.

Some names that stick out are Anton Khudobin and Robin Lehner, both of whom will need contracts after this season, and Tuukka Rask, Petr Mrazek, David Rittich, Philipp Grubauer, and Jordan Binnington, who are all expected to be unrestricted free agents after next season. Obviously some of those guys will re-sign with their current teams prior to the end of their contracts, and being a free agent in 2021 doesn’t make them any more likely to land in Seattle than anywhere else. Still, these are players worth tracking over the course of the next two offseasons. By the way, on Lehner, Vegas is exempt from expansion, so if he goes back to the Golden Knights, he’s off the table.

There are a couple more angles to consider. There are plenty of goalies out there with whom we aren’t currently super familiar that may be available in the Expansion Draft, and that may be worth a look come the conclusion of the 2020-2021 season. Maybe a stud AHL goalie like a Kaapo Kahkonen out of Minnesota is left exposed, and finally finds his way onto an NHL roster, but in Seattle. There’s also a chance that Seattle manages to snag a goalie or two when teams place players on waivers after their 2021 training camps. Vegas went this route, as Malcolm Subban backed up Fleury for most of that franchise’s first season, and Subban had been claimed off waivers from Boston after camp.

So, with all this in mind, we still can’t really predict with any accuracy who will be Seattle’s first goalie. But once the dust settles on this coming offseason, we should have a very good understanding of which direction the teams with netminding logjams are heading, and at that point, we may be able to whittle this pool down to just a few potential Marc-Andre Fleury’s.

Wait, I wonder if Seattle can get the actual Marc-Andre Fleury…