Another Ride on the Seattle Kraken Goalie Expansion Draft Carousel 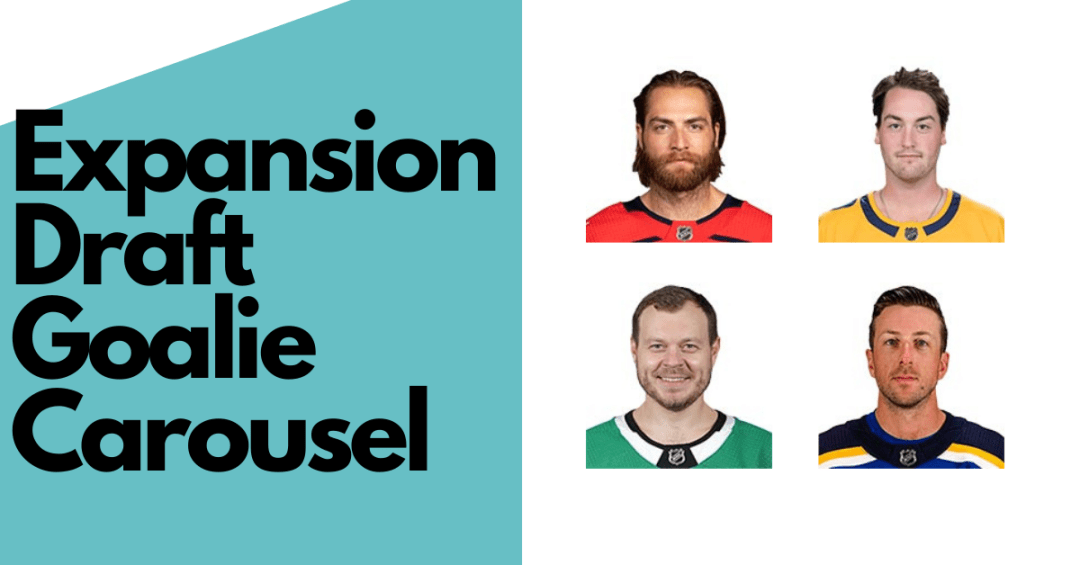 In the NHLtoSeattle days of yore, we took a deep look at the goalie market to try to understand which netminders could be on the Seattle Kraken’s radar, come the 2021 Expansion Draft. At the time, there were a lot of chips left to fall. In fact, the NHL’s 32nd franchise was still being referred to as “NHL Seattle” then, and the league had yet to even enter its Edmonton and Toronto postseason bubbles.

With so much uncertainty, there was a lot of guesswork about who would be available to become Seattle’s first netminder. Now that more chips have been played and many goalie situations are clarified around the NHL, we thought it was time to re-visit this exercise.

It’s worth noting that even though six months and an entire offseason have passed since that first stab at this topic was taken, well… there’s still a fair amount of guesswork required here. But after a very busy free agency period during this past offseason, there will be far fewer goalies moving around between now and Seattle’s 2021 Expansion Draft. The picture of Climate Pledge Arena’s future goalcrease is becoming a bit clearer now.

In the midst of the miserable summer of 2020, we in Seattle had our eyes on a number of goalie options that we thought could end up being targeted by the then-still-to-be-named hockey franchise in 2021. Among them, Matt Murray and Tristan Jarry in Pittsburgh, Braden Holtby in Washington, Jacob Markstrom and Thatcher Demko in Vancouver, and Antti Raanta and Adin Hill in Arizona.

There has certainly been some change in that group, and some of those netminders have now become unavailable and can be stricken from Seattle’s assumed list.

First, Murray, the two-time Stanley Cup winner, was traded on NHL Draft day to the Ottawa Senators, then signed a four-year deal worth $25 million in total. This clears up that question in Pittsburgh and means that both Murray and Jarry will be protected by their respective teams. That still leaves Casey DeSmith, 29, who has had respectable NHL numbers as the Penguins backup, but we think the Kraken can do better.

Holtby and Markstrom – along with Cam Talbot – played a game of musical chairs when free agency opened in October. Talbot went to Minnesota on a three-year deal, Markstrom replaced Talbot in Calgary on a six-year whopper of a deal worth $36 million, and Holtby took the vacant spot in Vancouver with a two-year contract. Of those three, Markstrom will certainly be protected by the Flames, but the other two are likely to be exposed.

Meanwhile, nothing has changed in Arizona. Hill will still be a restricted free agent at the end of the season and will be ripe for Seattle’s picking. Raanta will be a UFA and will need to be signed in the lead-up to the Expansion Draft if Seattle wants him. Kuemper will be protected barring a massive collapse this season or a trade, which has been rumored at times.

The contracts for Holtby and Talbot are interesting, because both are relatively short-term deals that will not protect either goalie from the Expansion Draft. By signing these veteran netminders, the Canucks and Wild each seemed to kill multiple birds with one stone.

With Holtby’s two-year deal at $4.3 million AAV, and with Thatcher Demko emerging as the true goalie of the future there, it’s all but given that Holtby will still be exposed to Seattle. In fact, the Canucks structured his contract to pay him $2.9 million real dollars in 2020-21 and $5.7 million in 2021-22. So, if the Kraken want him, they can have him, but they’re going to pay the bulk of Holtby’s salary. It’s a genius-level signing by Vancouver GM Jim Benning.

Similarly in Minnesota, with last season’s AHL Goalie of the Year, Kaapo Kahkonen, requiring protection, Talbot and his $3.67 million cap hit will likely be made available barring a phenomenal season by the 33-year-old.

The brilliance of these signings is that it gives both teams relatively short-term and low-risk deals for reliable veterans that can bridge the gap to their young backstops. If Seattle doesn’t want them, fine, they stay with the team for another season or two at a reasonable cap hit. If Seattle wants either of them, also fine, because by then perhaps the youngsters will be ready to shoulder the starter load anyway.

UFA Clarity… Or Not

Anton Khudobin shocked the hockey world by carrying his Dallas Stars through the playoff bubble and all the way to the Stanley Cup Final. Dallas rewarded the rolie polie goalie (as Linda Cohn calls him) with a three-year deal at $3.33 million annually. His counterpart, Ben Bishop, has a no-movement clause in his contract, meaning that Khudobin cannot be protected. Khudobin is getting up there in age at 34, but he will have just two years left on his deal when the Expansion Draft rolls around, and he can obviously still play. Might Seattle consider snagging that Kazakh character?

Jordan Binnington is still a question mark in St. Louis. His creasemate, Jake Allen, was traded to Montreal in September, which might have given some clarity about the team’s plans. But Binnington is still on an expiring deal. If the Blues re-sign him, then they will protect him. If he ends up as a UFA, though, Seattle GM Ron Francis will have a 48-hour window to pitch Binnington if he’s interested in signing him.

Tuukka Rask (33), Philipp Grubauer (29), and Petr Mrazek (28) are three other netminders whose contract situations remain unclear beyond the upcoming season.

New to the Mix

Sound Of Hockey’s John Barr put together an interesting look at Nashville’s Expansion Draft situation this week. There are some very talented players that will have to be left exposed by the Predators. But John also clued us in on their goalie situation, which does have our wheels turning.

We didn’t talk about the Preds’ goalies before, because it seemed obvious that Juuse Saros was the guy they’d protect, and frankly, there are some very good veteran forwards that will be exposed by Nashville. With Pekka Rinne 38 years old and on an expiring contract, he’s clearly out, so Saros is probably still the guy.

But another goalie in the Nashville system we hadn’t previously discussed is Connor Ingram.

Originally drafted by the Tampa Bay Lightning in the third round in 2016, Ingram, 23, has emerged as one of the best young goalies out there. He was recently rated by Scott Wheeler of The Athletic as the #4 goalie prospect, has had sterling numbers in the AHL, and certainly appears to be on his way to the NHL very soon.

Nashville also now has the top goalie prospect in the world since drafting Yaroslav Askarov, so GM David Poile may see Ingram as expendable. Could Poile be talked into giving up Ingram in exchange for Francis keeping his mitts off of one of Nashville’s forwards?

Also potentially of note, the New York Islanders only have one Expansion Draft eligible goalie in Semyon Varlamov. With Ilya Sorokin expected to take over the net there soon, we’re guessing the Isles would love for the Kraken to take Varlamov and his $5 million cap hit through 2022-23 off their books.

Finally, what about Montreal? Carey Price is guaranteed to be protected with his mammoth contract that features a no-movement clause, meaning that Allen will be exposed. Allen has been unreliable as a true starter in his career, but as a back-up or even in a platoon scenario, he can be excellent.

Ok, so maybe we didn’t quite solve who will be Seattle’s first goalie following its Expansion Draft. There’s still a lot that needs to happen between now and then. The upcoming season will certainly have some bearing on which goalies end up protected, and who Seattle will actually want to take.

Who are you taking?

All salary information comes from CapFriendly.com.