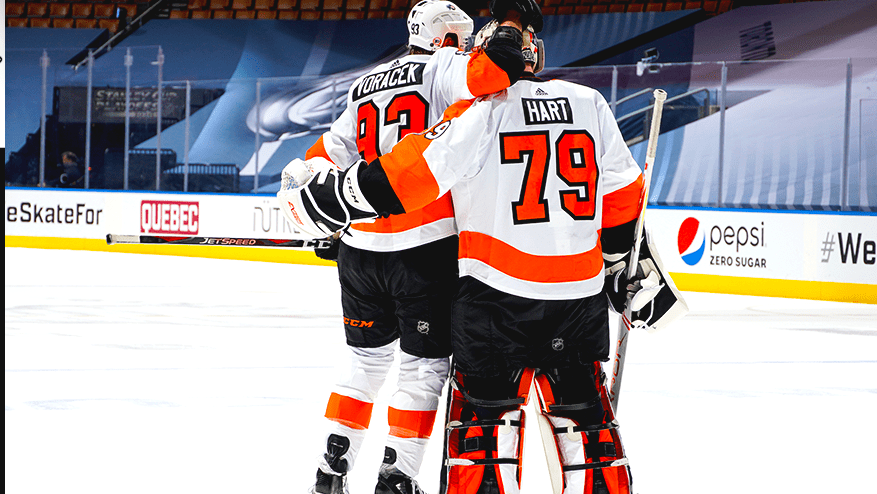 New York Islanders center Mathew Barzal is no shrinking violet when the game is on the line. He wants the puck. He wants to make the play.

It was that competitive spirit that helped Barzal as he led the Seattle Thunderbirds to the 2017 WHL Championship – where he was named playoff MVP. Sunday, in overtime against the Washington Capitals in Game 3 of the Islanders best-of-seven first round series, Barzal got the puck on his stick.

Breaking in behind the Capitals defense, Barzal collected a pin-point pass from Jordan Eberle and skated in alone on Washington goalie Braden Holtby. Barzal deked and swept the puck past Holtby’s pad to give the Islanders a 2-1 win and put them up 3-0 in the series.

“I run that play a little bit in practice, or even in games, just try to sneak behind the D a little bit,” Barzal said in Toronto, Sunday. “Just time it perfectly on the blue line and great play by Ebs.”

It was the first playoff overtime goal by Barzal, who was playing in his 15th postseason game of his three-year career. The goal was the second of the playoffs for Barzal, the first in the series with the Capitals, to go along with a pair of assists.

In what was a tight checking game, Barzal had some looks and created offense in regulation but couldn’t find the back of the net until the extra frame.

“I feel like our line’s been pretty solid five on five, we’ve played well, and I think we’ve scored a few goals,” Barzal said. “Tonight was a great game I thought by our team. In general, I thought our line played well in the O-Zone and created chances…just really happy to get the winner there.”

To slow down Barzal, the Capitals threw defenseman Brenden Dillon out on the ice against him as much as possible.

Dillon, who played for the Seattle Thunderbirds from 2007-2011, held Barzal in check for most of the night – playing over nine minutes against him. Barzal had the last laugh however as Dillon was on the ice as Barzal got behind everyone in overtime.

“We get to practice with him and against him,” New York’s Anders Lee said about Barzal. “We see how dynamic he really is day in and day out. He proved it out there on the ice again tonight.”

Barzal, 23, is in his second Stanley Cup Playoffs. He’s still learning but Sunday checked off a big accomplishment by winning a game in overtime.

“He wants to be that difference maker and today he got an opportunity and he capitalized on it,” Islanders head coach Barry Trotz said. ‘I just like the growth of Mathew and he’s growing all the time as a player and these experiences are going to help him grow and play the right way, know how to play in the playoffs…he’s been accepting of the challenges I’ve given him.”

Game 3 between the Philadelphia Flyers and Montreal Canadiens turned into one of ‘what you can do I can do better’.

Former Everett Silvertips goalie Carter Hart became the youngest Flyer to record a shutout as he blanked Montreal 1-0 after kicking away all 23 Montreal shots. It was an impressive performance that came a game after Hart was pulled in the second period during Friday’s Game 2 while allowing four goals as former Tri-City American Carey Price shut out the Flyers 5-0.

“It’s a good thing that he’s a little bit oblivious to some things as a goalie in Philadelphia,” Flyers Jakub Voracek said Sunday. “He’s really strong mentally. He’s a young kid who works really hard and he’s pretty impressive. The way he bounced back, even last year, if he had a bad game he’d bounce back strong.”

After being pulled on Friday, Hart was visibly upset and cameras caught him slamming the door at the bench shut. There was anger and frustration.

Hart said he and his teammates hit the pool Saturday for some fun to get their minds off the game for a few hours. That helped reset him and the Flyers as a whole.

Sunday, it was back to business for the 22-year-old.

“I’ve just got to do my job,” Hart said. “That’s what it comes down to at the end of the day. That criteria is stopping pucks, so when it’s time to play the game, that’s all I have to worry about. We’ve got a great crew in front of us that makes my job easier.”

Philadelphia took a 2-1 lead in the best-of-seven series that has been a goaltending clinic. Goals have been tough to come by. Hart got the shutout while his boyhood idol, Price, has only surrendered three goals in the series.

Game 4 will be played Tuesday.

Vegas defenseman Shea Theodore scored the lone goal for the Golden Knights as they fell to Chicago 3-1 in Edmonton Sunday. Vegas leads the series 3-1 and will look to advance to the second round with a win on Tuesday. Theodore has been outstanding in the postseason and Sunday’s score was his fourth of the playoffs to go with six points in six games.

Vegas Golden Knights Defenceman Shea Theodore is off to a hot start in the playoffs. (Photo by Jeff Speer/Icon Sportswire)

In Sunday’s most entertaining game, the Dallas Stars scored late against Calgary to force overtime. The Stars would go on to win 5-4 and even their series at 2-2. Flames’ forward Derek Ryan picked up an assist on a goal in the third period that looked like it would be game winner. Ryan not only played for the Spokane Chiefs from 2003-2007 but he is a Spokane native.