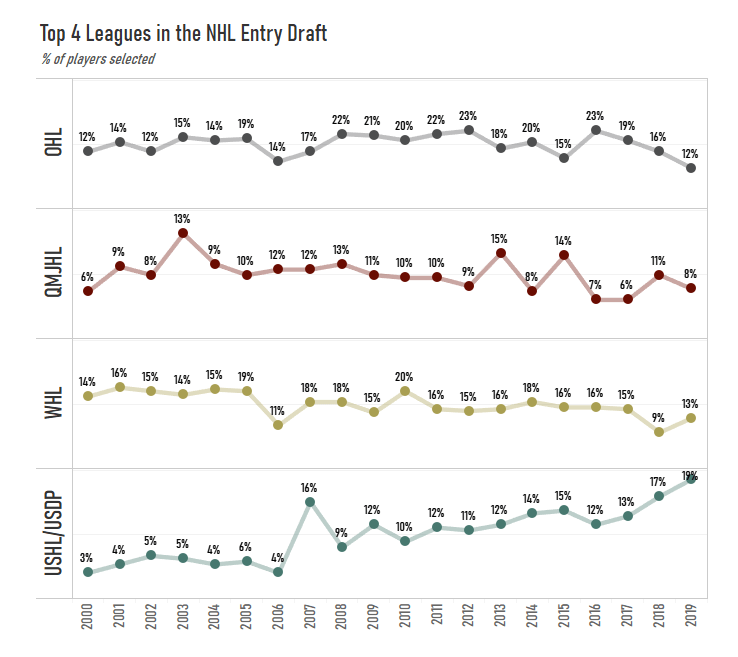 The NHL Entry Draft is this Tuesday (First Round) & Wednesday (Rounds 2-7). For all the new hockey fans out there, I thought it would be a good idea to lay out how the NHL Entry Draft works. The NHL Draft works similarly to the NFL, NBA, or MLB drafts. It consists of seven rounds, with each round consisting of the same number of selection choices as there will be teams in the League in the following season. The draft order is generally determined based on a “Worst to First” order of the most recent completed season. However, the top 3 teams of the draft order are determined by a weighted lottery system of teams that did not qualify for the playoffs.

The NHL Entry draft is for top hockey players 18 – 20 years of age. Last year there were 217 players selected by NHL teams across 138 teams and 33 leagues that can be classified as amateur, development, or other international professional leagues. The most prominent leagues are the United States Hockey League (USHL), Ontario Hockey League (OHL), Quebec Major Junior Hockey League (QMJHL), and the Western Hockey League (WHL). The WHL should sound familiar to Washington and Oregon residents because that is the league where the Spokane Chiefs, Tri-City Americans, Everett Silvertips, Seattle Thunderbirds, and Portland Winterhawks play.

You can expect that over 50% of the players drafted will come from these 4 leagues with the other 50% spread across ~30 other leagues.

From a ‘Place of Birth’ perspective, most of the draft picks are born in the US or Canada but that overall % is decreasing as Finland, Russia, and Swedish born players have been increasing in number over the last couple of years.

Not all draft picks will play in the NHL and it will be several years before we see some of these players in the NHL. The vast majority of draft picks will be sent to club affiliates or back to their amateur, development, or college teams to develop further until which time they are called up.

Here is a look at how those games are played for skaters over a career based on year after draft.

And here is a look at those games spread over a career for goalies based on year after the draft.

Given that draft picks may not be seen playing in the NHL for several seasons after the draft, the draft is a reflection of the future state of NHL teams. I hope this gives you a little bit more appreciation and understanding for the NHL Entry Draft.