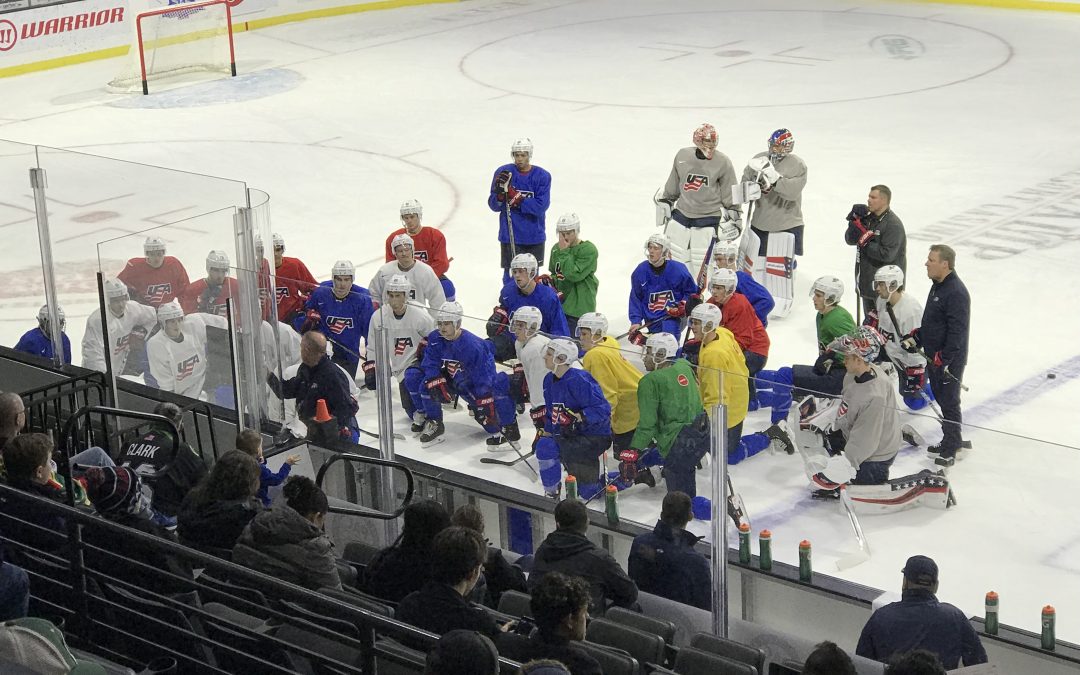 Before New Year’s Eve champagne can be popped and the fireworks can start there is still a big hockey game to be played at the 2021 IIHF World Junior Championship in Edmonton. Team USA will take on Sweden in the last game of the preliminary round and it will decide the winner of Group B and all-important seeding in the quarterfinals.

With a regulation win, Team USA will win the group and get the easier pathway to the Gold Medal game. They’ll face a smarting Swedish group that had it’s unreal 54-game preliminary round win streak snapped Wednesday in a gut-wrenching 4-3 overtime loss. Russia won it with under six seconds left in the overtime period.

It will be a good matchup as both countries ice rosters loaded with future NHL stars. The Unites States boast 23 NHL-drafted players, nine of which are first-round picks. Sweden counters with 18 drafted players and six first-round draftees.

The USA stumbled out of the gate to lose to Russia but since has found its legs, its offense, and now has a shot of winning the toughest group in the World Junior Championship.

Thanks to Russia having lost out on a crucial point due to their overtime win over the Swedes, Team USA has control of their own destiny and an excellent chance to finish at the top of Group B, going into their final game of the group on Friday as favorites over Team Sweden.

This will be entertaining hockey.

Russia beat Sweden in overtime which is only worth two points in the standings. That gives them eight points, and the US can get to nine points by beating Sweden in regulation.

The US has been on fire after losing to Russia in the opening game of the World Junior Championship. That game ended at 5-3, but the Americans played better than perhaps the score revealed.

A five-minute stretch in the second period saw goalie Spencer Knight struggle handling the puck and that resulted in two quick Russian goals. Knight was pulled for Everett Silvertips goalie Dustin Wolf who would hold down the fort which allowed the US to get to within one goal late before an empty-net tally put it away.

In the two games since, the Americans haven’t allowed a goal and have scored 18 times. Team USA is fast and full of skilled players, all of whom can put the puck in the net.

Anaheim Ducks prospect Trevor Zegras has sparked the USA and is tied for the scoring lead in the World Junior Championship with 10 points in three games. He’ll need to keep producing against the Swedes. Zegras isn’t alone as the US is getting balanced scoring and players like Matthew Boldy and Bobby Brink have had big offensive performances.

With Knight’s struggles against Russia, there was a bit of a goalie controversy that crept into the USA camp. Wolf started the following game against Austria and made 10 saves to earn a shutout. Knight was back in net the next night against the Czech Republic and he didn’t allow a score.

Who will head coach Nate Leaman give the crease to Thursday?

The win streak is over. It was heart breaking, losing in overtime with under six seconds on the clock. They won’t have time to mourn and can still win Group B. It’s simple, they just need to beat the US.

Sweden can score with the best of them and gets a lot of offense going from the blue line. Edmonton Oilers 2019 first-rounder Philip Broberg is having a strong tournament as is Arizona Coyotes prospect Victor Soderstrom.

Up front they are led by Lucas Raymond, a Detroit Red Wings first-round pick, who has been big during the preliminary games.

Like the USA, Sweden has options in goal and can argue they have one of the best tandems at the World Juniors.

Hugo Alnefelt is the older, more experienced goalie and played the first two games for Sweden. Against Russia, they gave the start to 2021 NHL Draft prospect Jesper Wallstedt. The younger of the two, Wallstedt, played well against the Russians but allowed four goals.

Was that enough to earn him a start against the Americans?

Special teams are always Important in big games and will be a factor on Thursday.

The Swedes’ power play let them down against Russia, but they have been one of the better units so far. The USA comes in with the top penalty kill at the World Junior Championship. Whoever wins that battle will come out on top.

Both teams can score, but the US has a bit more firepower and skill up front than the Swedes do. Sweden’s defense is strong, though, so that will be another great strength-against-strength matchup to watch.

Sweden is coming off a tough loss to Russia that snapped their epic win streak. The USA club was off Wednesday and is more rested. In a short tournament, that could be the tipping point that will put the US over the top in this matchup.