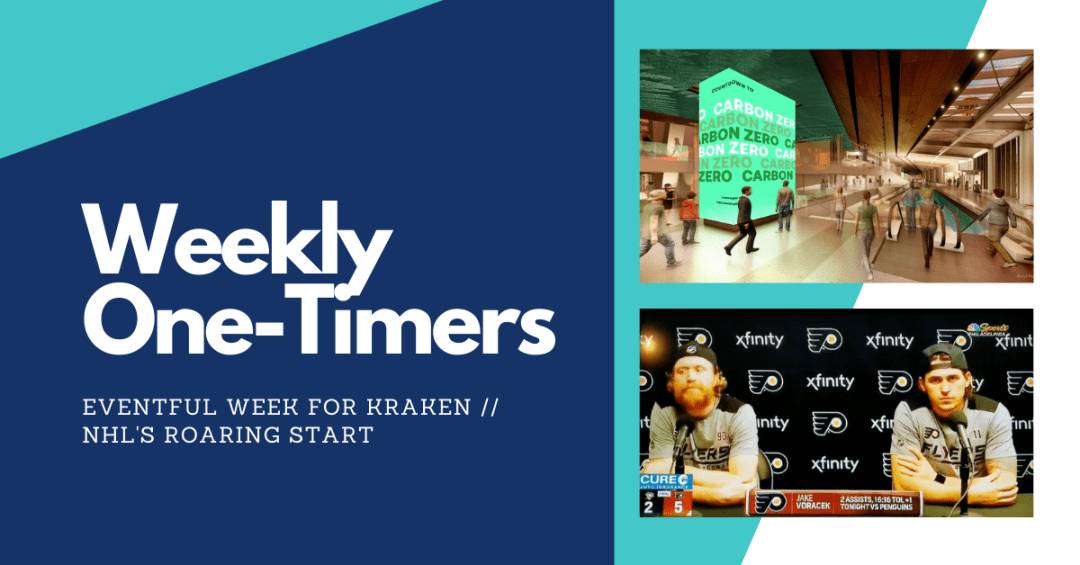 With the hockey world focused on the start of the NHL season, the Seattle Kraken snuck over the finish line of their season ticket sales process. Being that the team had 35,000 season ticket deposits for an arena that holds 17,000, it was just a matter of time before this happened. But now that it has, there are surely some disappointed Kraken fans. The good news for people that never got the call is that the Kraken are proposing options to enable depositors to buy individual tickets to regular season games. Please kindly note that this story was first reported by SOUND OF HOCKEY’S ANDY EIDE!

Seattle Kraken License Plates are coming soon for Washingtonians. The Kraken announced that they need 3,500 “signatures” on a petition for team-themed license plates to get produced in Washington State.

The Seattle Kraken practice facility experienced a bit of a mishap last weekend when part of an adjacent building that was getting knocked down… uh… fell on the practice facility. Oopsy daisy!

Word around the campfire is that the damage will not delay the opening of the facility, but nonetheless, it’s an unfortunate setback for the team. Miraculously, nobody was injured in the accident.

The Athletic’s Scott Burnside had an excellent interview with high-profile Seattle Kraken owner, Jerry Bruckheimer (paywall). It’s a great conversation about Bruckheimer’s roots of being a hockey fan, Wayne Gretzky, and his passion for the game.

The story of Oscar Lindblom fighting Ewing’s Sarcoma – a rare form of bone cancer – took the hockey world by storm last season. He did return for two games in the bubble, but made his first appearance in regular season play this week and scored for the first time since November 2019. Meanwhile, teammate Nolan Patrick – who missed all of last season with migraines – also returned and scored for the first time since March 2019. The Flyers beat their cross-state rival Pittsburgh Penguins twice in three nights to start the season.

It’s not all rainbows and lollipops in Philadelphia, though, as apparently Jake Voracek is less than thrilled with the Philadelphia Inquirer’s Mike Sielski.

Voracek also went on to call Sielski a weasel in the press conference. Travis Konecny’s reaction is all-world.

Here’s a pretty good explanation as to where Sielski thinks the outburst came from, via crossingbroad.com.

Patrik Laine might want out of Winnipeg, but he showed in the Jets’ season opener that he won’t be phoning it in to force a trade à la the NBA’s James Harden.

Laine’s overtime winner was his second of the game, and he added an assist in Winnipeg’s 4-3 home victory Thursday night over the Calgary Flames. His lethal shot is as dangerous as ever, and he deserves credit for his professionalism and grit. Laine said he was “pissed off” about being denied a Gordie Howe hat trick because he received only a roughing minor for a skirmish with Calgary’s Matthew Tkachuk.

“That one time when I drop my gloves, I get a two-minute penalty. So that’s kind of embarrassing,” Laine told TSN.ca.

Laine, who is due to be a restricted free agent after this season, also has the extra motivation of looking for a long-term contract worth more per year than the $6.75 million he’s getting this season.

Some have even speculated that Laine could end up with the Seattle Kraken. It’s far too soon to tell whether the Kraken could put a package of assets together that would appeal to the Jets, but it’s in Winnipeg’s best interests to get a trade done before Laine goes unsigned into next season’s training camp or beyond.

Seattle has a better chance than many other teams that are up against the cap and navigating through this revenue-battering COVID-19 season. (By the way, one of Laine’s agents – Mike Liut – happens to be a former Hartford Whalers teammate of Kraken GM Ron Francis.)

Keith Yandle has played 866 consecutive games, dating back to March 2009. According to TSN, the veteran puck mover has “fallen out of favor” with the Florida Panthers organization and was not included in the main group of six defensemen at practice on Friday.

With Yandle holding a no-movement clause, the only thing new general manager Bill Zito can do to not play Yandle is healthy scratch him. Yandle cannot be traded or put on waivers without his permission.

Yandle, 34, is still a productive player and has been a huge part of Florida’s power play. Being healthy scratched after battling through everything that comes with playing that many games in a row would be a real kick in the nether regions, though it sounds like there’s still a chance Yandle plays in the team’s opener on Sunday (the Panthers have not yet played due to COVID-related postponements).

The ECHL will be expanding by two teams next season, located in Coralville, Iowa, and Trois-Rivières, Quebec.

NWHL announced their schedule for their bubble season from Lake Placid.

Quinn Hughes, one of the most exciting young defensemen in the league, tallied an assist on opening night against the Oilers from his knees. That’s pretty cool!