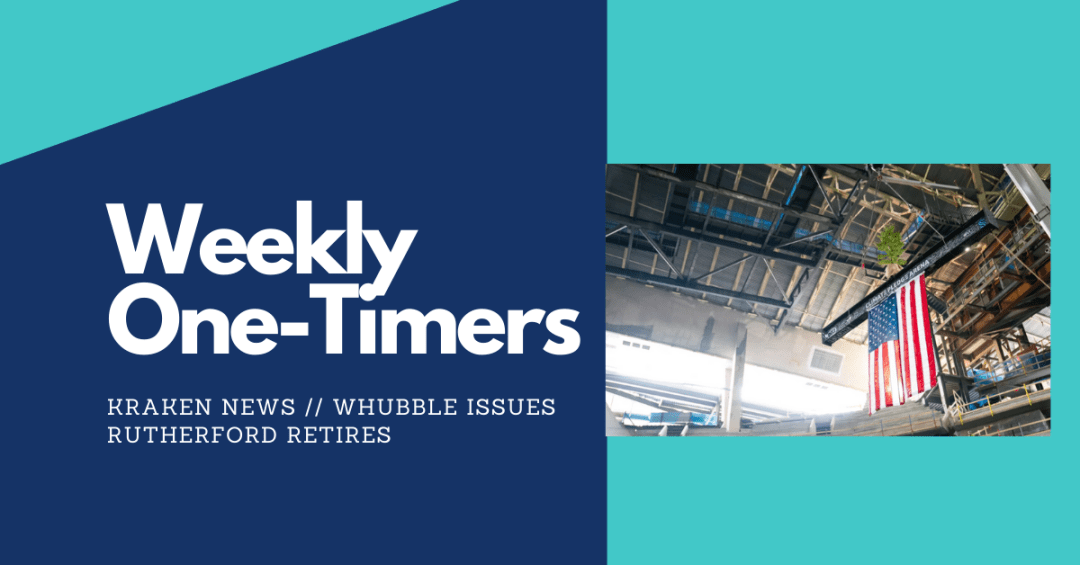 Climate Pledge Arena gets topped off

The new home for the Seattle Kraken has reached a major milestone. Friday morning, the last steel beam was installed at Climate Pledge Arena. The ceremony took place in front of construction workers from Mortenson along with Kraken and City of Seattle staff.

It took 2,500 craftworkers to reach this point in the arena construction. A total of 147,430 bolts were used to secure the 8.9 tons of steel and 1.3 million craft hours have been put into the project so far.

The final beam was signed by workers and onlookers before being hoisted up and in place.

Climate Pledge Arena is on track to be open in the fall of 2021 in time for the Kraken inaugural season in the NHL.

On Tuesday, the Kraken dropped a news bomb that the legendary John Forslund had been hired by the team to be its play-by-play announcer.

Forslund is truly one of the all-time greats at this particular trade. So when the Carolina Hurricanes cut his pay in July, we at Sound Of Hockey had already begun clamoring for the Kraken to bring him into the fold.

We and many other Kraken fans got our wish, and now we can’t wait to hear Forslund whisper sweet hockey-related nothings into our ears for years to come.

This is entirely anecdotal. BUT… It seems like the general reaction from Seattle faithful has been less than favorable about the Kraken’s revelation—announced in tandem with the Forslund news—that their broadcast partner will be ROOT Sports.

This tweet from the Seattle Kraken Troll sums up the sentiment nicely:

Let it be known that we at Sound Of Hockey do not hold any strong opinions here, and we’re just sharing what we’ve seen on social media, on Reddit, in the comment section on our site, and pretty much anywhere else that Kraken fans gather online.

From our in-depth and very scientific investigative reporting, the consensus for why some fans are upset is that ROOT Sports currently does not have a streaming option for folks who do not subscribe to cable. Obviously, there has been a big shift into digital streaming platforms like Hulu, Sling, and YouTube TV, but ROOT cannot be found on any of those.

We conjectured (conjected? conjec…shed?) privately that there might be more news coming about a separate streaming partner. But Reddit user Olbaidon sent concerns to the Kraken and then shared the team’s response publicly.

“At this time games will be available through ROOT SPORTS distribution channels exclusively.” So, that settles the idea of a separate streaming partner, which apparently is not coming.

We understand the frustration from those who don’t want to pay for cable, and we do wonder if this alienates some potential new hockey fans that will end up missing the boat because of a lack of exposure. And this does feel like the very first thing the Kraken have done that hasn’t wholeheartedly put first the interest of the fans and the desire to grow the game in the Pacific Northwest. But we also assume that the Kraken received an enormous bag of money from ROOT Sports, and at some point they do also need to make some decisions that benefit them financially.

We’ll have plenty of discussion on this topic on the next Sound Of Hockey Podcast, so tune in!

WHL coming back (sort of)

The WHL has long said it plans to play this season in some form, despite the many challenges and setbacks associated with the ongoing COVID-19 pandemic. The province of Alberta has granted permission to the teams based within its borders—the Red Deer Rebels, Edmonton Oil Kings, Lethbridge Hurricanes, Medicine Hat Tigers, and Calgary Hitmen—to begin play on Feb. 26.

Does this mean the Seattle Thunderbirds and Everett Silvertips are coming back soon too? Well, not necessarily.

Read the full statement here, which gives some interesting details about the lengths to which the league will go to be able to get at least some of its teams playing.

There was some disappointing news out of the Whubble, which has been underway for a week now. The Metropolitan Riveters withdrew from the tournament in Lake Placid after several members of the organization tested positive for COVID.

On the bright side, there’s still a great tournament in progress with regular season games for the five remaining teams continuing on Saturday, all of which are streamable on Twitch.

The Minnesota Whitecaps lead the standings with a perfect 3-0-0 record, but the expansion Toronto Six are hot on their heels at 2-1-1.

Remember, the Isobel Cup Semifinals and Final will be shown nationally on NBCSN on February 4th and 5th.

Pittsburgh Penguins general manager Jim Rutherford abruptly retired on Wednesday, citing personal reasons. Newly-hired Seattle Kraken AGM (and friend of the SOH Pod) Jason Botterill’s name is notably being bandied about as a replacement for Rutherford, who had held the role since 2014.

Botterill did work in Pittsburgh’s front office for many years and served as the team’s associate general manager, winning three Stanley Cups along the way.

For now, Patrik Allvin assumes the role with an interim tag, making him the first Swede to serve as GM of an NHL team.

Los Angeles Kings defenseman Sean Walker took a slapshot to the face off the stick of Minnesota’s Matt Dumba on Friday.

The aftermath was not pretty.

In this same game, Matt Roy also took a very dangerous Kevin Fiala hit from behind, which resulted in an injury for Roy and a three-game suspension for Fiala.

Both Roy and Walker were allowed to travel back to Los Angeles with the team, so it sounds like the very serious types of injuries that could have occurred in both cases were thankfully averted. Nonetheless, it was a rough night for the Kings.