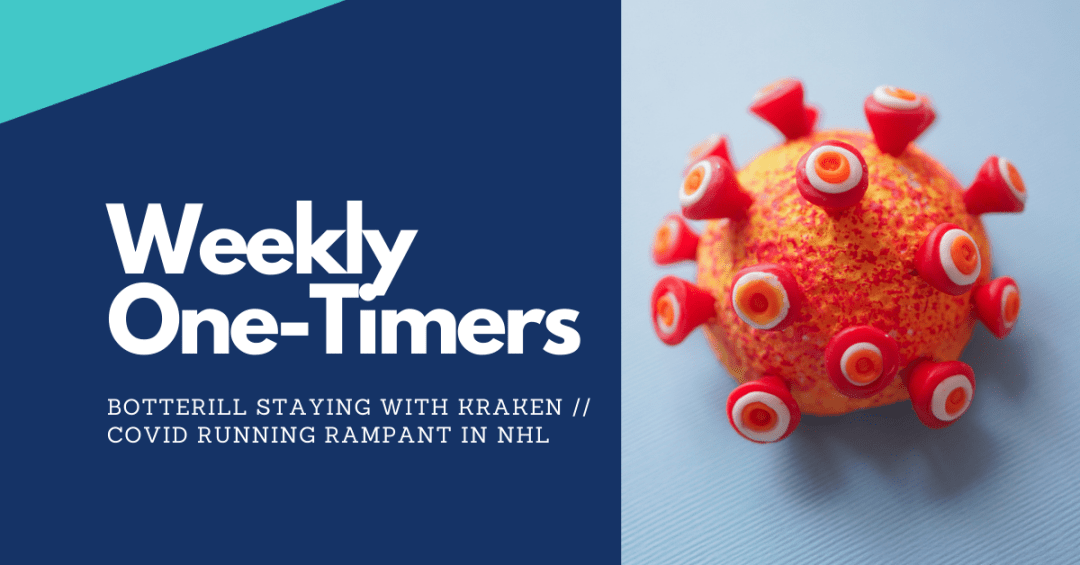 Ever since Seattle Kraken assistant general manager Jason Botterill appeared on the Sound Of Hockey Podcast, his stock has skyrocketed faster than GameStop during a short squeeze. Very topical, I know.

As we mentioned in last week’s Weekly One-Timers post, Jim Rutherford abruptly retired as general manager of the Pittsburgh Penguins, and Botterill’s name was being considered as a replacement for the long-time executive. It made sense, since Botterill was part of that franchise’s front office when it won its three Sidney Crosby-era Stanley Cups.

But Botterill is under contract with Seattle, and when a contract is in place, permission is required to speak to a candidate.

Bobby Margarita updated us via Twitter on Thursday that Pittsburgh did not receive permission from Seattle to talk to him, at least not quickly enough from the Penguins’ point of view.

So, although this story has flip-flopped a couple times now, the latest seems to be that Botterill is staying with the Kraken.

Botterill was hired as Seattle’s AGM just one month ago. Here’s hoping he stays at least through the inaugural season.

As you likely heard, Andy Jassy is set to take over as CEO of Amazon in Q3 of this year. We have no idea if this has any impact on the Kraken, but Jassy—currently the CEO of Amazon Web Services—is a minority owner of the team and had a big role in the branding of the franchise. There’s also speculation that Jeff Bezos moving out of the CEO role could somehow lead to the Sonics coming back to Seattle, but it remains unclear who is spreading these rumors.

Ok, but seriously it has no real evidence behind it at this time, other than Bezos is really rich, is based in Seattle, and Seattleites want the Sonics back.

After the NHL successfully closed out its 2019-2020 postseason bubble with zero positive tests throughout, we at Sound Of Hockey were optimistic about 2020-2021. We thought it could be more successful than other leagues like the NFL and Major League Baseball at safely carrying out a season outside of a central bubble, because clearly the NHL just gets it and wouldn’t allow COVID to be an issue. Right?

Our optimism was perhaps a bit misguided.

As of Friday, 26 NHL games have been postponed this season.

Of course, there was always flexibility built into the schedule to allow for such postponements, but it does beg the question of what else can be done to make it more safe. And if this trend continues, does the league carry on, just accepting that more players and staff will get COVID?

There are currently four teams trying to contain outbreaks in Buffalo, Minnesota, Colorado, and New Jersey—the Devils have had as many as 17 players on the COVID protocol list. This does not include teams like Vegas, Dallas, and Carolina, who have already had their seasons shut down due to positive tests but have since returned to play.

With Colorado the latest team to shut down—the Avs just played three games against Minnesota, making us wonder if there may have been some cross-mojonation between the clubs—the league did get creative with its scheduling. It replaced a Blues/Avalanche series with a previously postponed Blues/Coyotes series on Saturday and Monday. It’s a quick pivot in plans for those teams but a clever decision by the NHL to try to keep things somewhat on track.

The NHL released a statement on Thursday with new steps that must be taken immediately to hopefully curtail the spread of the virus. The most notable new protocols are removal of partitions behind benches to improve airflow and limiting arrival at the arena to no more than one hour and 45 minutes before game time.

Read the full statement from the league here.

The NHL isn’t the only league that has had its plans altered after COVID infiltrated its ranks. The same is certainly true for the NWHL, which very sadly was forced to suspend its previously exhilarating tournament in Lake Placid.

The Metropolitan Riveters and Connecticut Whale had both exited the so-called Whubble after receiving positive tests, and the rest of the six-team league followed suit on Wednesday.

The timing was especially painful, as the NWHL was preparing for its first-ever nationally televised games. The semi-finals and final were set to be played on NBCSN with the Seattle Kraken’s new play-by-play man, John Forslund, on the call along with AJ Mleczko.

It’s a devastating blow for a league that seemed to finally be finding some traction and national attention with this very protracted season.

WHL update from our WHL correspondent

On the other side of the coin, Sound Of Hockey’s own Andy Eide broke the news this week that Washington Governor Jay Inslee has given the green light to the WHL teams within the state to return to play.

We don’t have a start date yet, and we also don’t know if the Portland Winterhawks will be given the same go-ahead by the state of Oregon.

The WHL teams located in Alberta did have a start date set last week and are expected to begin play on Feb. 26.

Victor Hedman is cooler than ever

Victor Hedman has done a lot in his NHL career, including winning a Stanley Cup, a Norris Trophy, and a Conn Smythe Trophy and being named to four All-Star Games. Plus, he just comes across as a cool dude. But we don’t think he’s ever looked cooler than he does now that he has this Swedish banger as his goal song.

The Lightning do have a standard song they play for most players, but a few get special treatment with personalized tunes after they tickle the twine.

Here is the full song with lyrics for your enjoyment.

The Rangers—who waived Tony DeAngelo after he got in a reported scuffle with goaltender Alexandar Georgiev on Saturday—came away with a 4-2 victory on Thursday over the Capitals.

As the Rangers were leaving the ice, they celebrated with what appeared to be a feigned altercation between other goaltender Igor Shesterkin and star forward Artemi Panarin.

They seem sad that DeAngelo has left.