A statistical look at scoring in the NHL this season 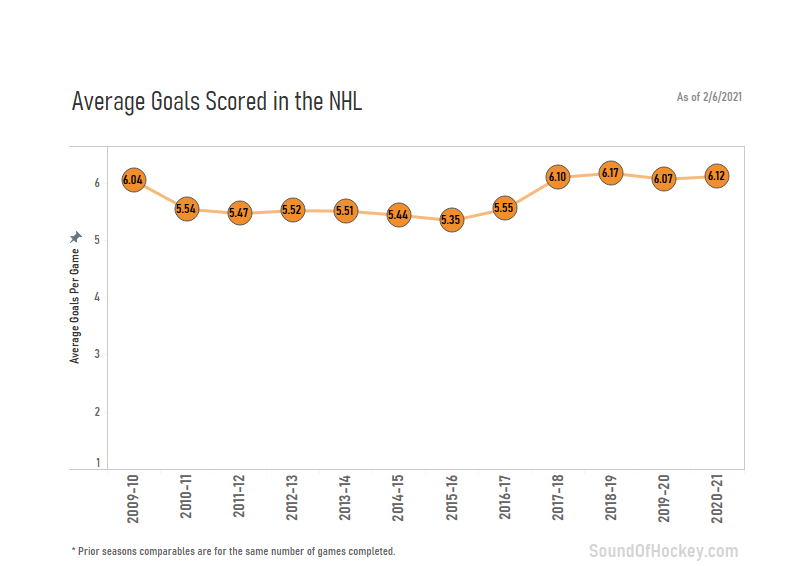 It seems like every season we hear the narrative that goal scoring in the NHL is up year over year. Instead of taking someone’s word for it, I like to dig into it to A) see if it is true and B) identify changes at the individual team level.

As you can see above, scoring is up but only slightly from 6.07 goals per game last year to 6.12 this year. Heading into this season, there were a lot of questions around the long downtime for the seven teams that did not qualify for the NHL Playoff bubble last summer, shorter training camp, and the lack of pre-season games possibly impacting the scoring in the league this year. Those factors might have an effect on the games in some manner but at this time it seems to be immaterial to draw any conclusions based on scoring.

There might not be a material change for the league at large, but there certainly are changes in scoring by individual teams. Here is a rundown of the scoring change year over year by team through Friday’s games.

Another broad metric I like to look at is the ‘average margin of victory’ in games. The general consensus is that the smaller the margin of victory, the better the game, and I tend to agree. Let us take a look.

As you can see, the games are closer this year compared to last year and a heck of a lot closer compared to the 2018-19 season. It will be interesting to see if this trend continues through the rest of this campaign or if it is just an early season blip.

Goals for and goals against

Of course goal scoring is one thing, but goals against is another important factor in how teams are performing (just ask the Vancouver Canucks). If you want to look at individual teams’ performances over time in the ‘goals for’ and ‘goals against’ categories, I’ve created an interactive visual below.

It is too early in the season to draw any hard and fast conclusions, but it will be something we keep an eye on as this shortened season progresses. If you have any questions or data requests, message us at the @Sound_Hockey twitter account.