Secondary scoring in the NHL 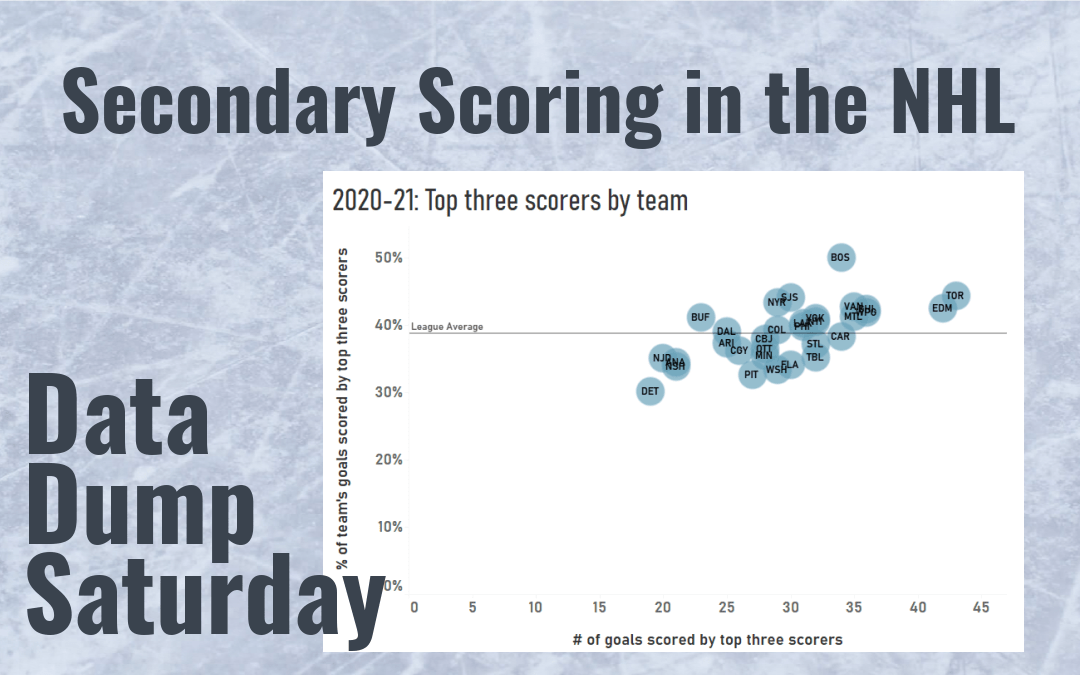 Earlier this week there was an AP article talking about secondary scoring in the NHL. I tend to believe that the more spread of scoring you have through your lineup, the better your chances for success in the Stanley Cup Playoffs. I thought it might be a fun concept to dig into a bit on this week’s Data Dump Saturday. This will take a little exploring.

% of team scoring by the top three scorers

The first thing I want to look at is the percentage of goals scored by the top three scorers on each team. Secondary scoring in this analysis is scoring done by everyone else. There is some context missing from this type of analysis such as injuries, trades, etc. but this is just intended to be a directional exploratory analysis.

Let us next look at the last three years’ conference final teams (highlighted) to see if there is a pattern relative to secondary scoring during the last regular seasons.

It would be foolish to draw any hard and fast conclusions based on this quick analysis, but it appears that teams that are more dependent on their top line tend to not fair well in the playoffs, nor do teams that spread scoring across their lineup.

An important point for context not shown above is the team goal scoring. If you were to look at the first graph above, you might think Detroit is doing well because they are not dependent on their top three scorers. However, Detroit is not having a great season. We need to incorporate the average goal scoring to provide additional context and to explore just a little bit more.

Again, this is just a quick exploratory analysis on the concept of secondary scoring and would need a much more thorough and complete analysis to draw any conclusions, but it is something to ponder during the playoffs.