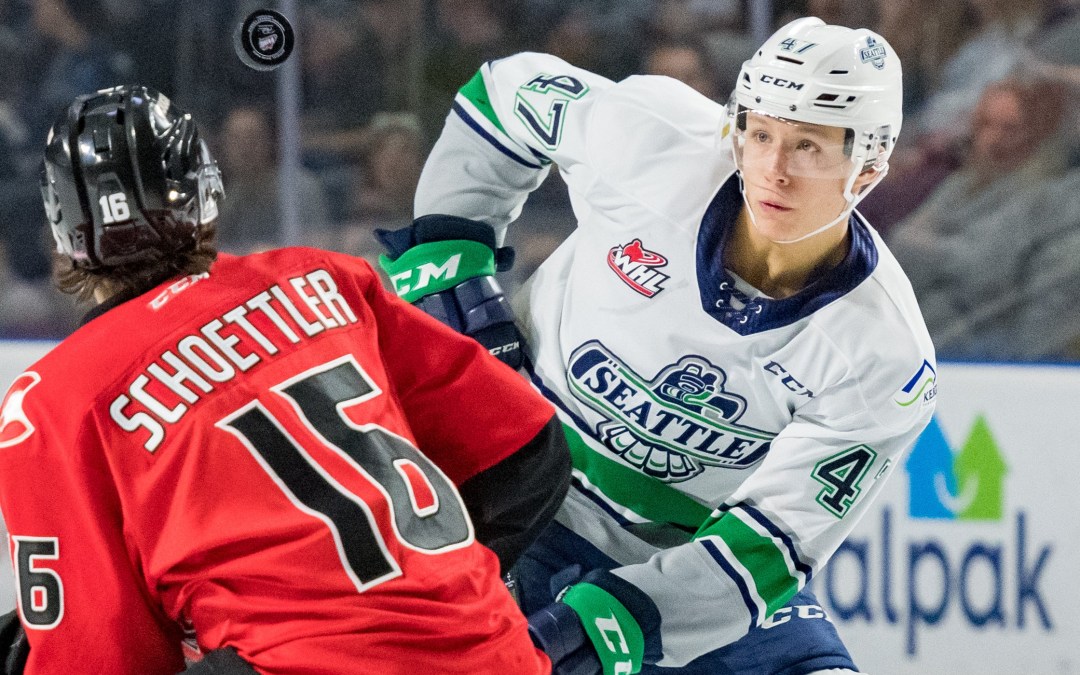 It will just be 24 games. The games will be against just four different opponents. There will be no playoffs, no overnight trips, no long swings through the Canadian prairies, and there will be no fans in the building. Without a doubt, the 2021 Western Hockey League’s U.S. Division will look different this season.

Now that the Washington State government has given the WHL the green light, the U.S. Division will open the season on March 19th. It will be over a year since the last game in the division and it comes at a time that normally is reserved for playoff races and positioning.

“It’s nice to finally know that we’re going to play some hockey,” Seattle Thunderbirds forward Lucas Ciona says. “It’s been a tough year just sitting at home, training, and doing schoolwork. It’s nice to know that we’re getting to go back to Seattle, and it will be good to be with the guys again.”

While not the most ideal situation the short season will allow the Thunderbirds, Everett Silvertips, Portland Winterhawks, Tri-City Americans, and Spokane Chiefs to play hockey.

Pulling this off will be a financial burden on the five clubs as they rely heavily on gate receipts for income. There will be none of that.

On the surface it begs the question of why go through with it at all?

The WHL is one of the top development leagues in the world — last year’s draft saw 28 WHL players selected — and it’s that development that’s the driving influence for the league and its member teams.

“It’s definitely about developing our group but it’s also about making sure that these kids have as much normalcy as possible,” Seattle general manager Bil La Forge says. “Hockey is a great game, and they get to play it. We want to develop our team and our young men. We want to reward these kids for the hard work they’ve put in.”

It’s been a long summer for U.S. Division players

The last game played in the division was a 3-0 win by the Spokane Chiefs over the visiting Kamloops Blazers on March 10th, 2020. Two days later the league and most of the world shut down due to concerns over the growing Covid-19 pandemic.

Players were sent home and the playoffs, Championship Series, and Memorial Cup were all shelved.

Ciona, 17, was one of those players. The 6-foot-2, 200-pound winger had just finished his rookie season in Seattle and was suddenly homebound in Edmonton. Since then, he and the rest of the WHL’s players have been waiting for the call to return to their teams.

“We’ve been finding ways to keep busy,” Ciona says. “I’ve been working out and doing schoolwork. I really enjoy working out, so it hasn’t been too bad. Skating, going out to the ODR’s (outdoor rinks). We’ve been going full pads at the ODR so it gets a little competitive.”

Endless split squats and lunges are great for a player’s endurance. So is playing pick-up games on an outdoor rink, but for young players to develop, they need to play real games. The speed, competition, and intensity just aren’t the same.

To find that edge, Ciona was one of many U.S. Division players who hit the ice last November to get ice time by playing in Junior A leagues like the Alberta Junior Hockey League. He got into four games with the Spruce Grove Saints as did a handful of his Seattle teammates like Kai Uchacz, Tyrel Bauer, and Matthew Rempe.

Other players found some ice time in other Junior A leagues. Among those guys were Everett Silvertips and Montreal Canadiens prospect defenseman Gianni Fairbrother who played for the Nanaimo Clippers of the BCHL and was joined by teammate Dylan Anderson who played for the Cowichan Valley Capitals.

Those stints ended up being short-lived as the Canadian provinces ultimately would shut down all hockey leagues after just a few games. By the time these players get through quarantine and back on the ice for abbreviated training camps, any advantage they earned will be long gone.

“It’s going to be a whole other thing,” Ciona adds. “We’ll be coming back and it will be another fresh start for everybody. Nobody has been practicing or playing too much so it will be interesting.”

No fans and new safety protocols for U.S. Division

When the league starts up in March there will be no fans allowed in the building.

The U.S. Division has become known for loud, large, and intimidating crowds in its arenas. Last season, four of the division’s five teams were in the top seven in WHL attendance. It’s going to be a bit quieter this year and is something the players will have to adjust to.

“We’re going to have to learn to create our own emotion,” La Forge says. “The one thing that this has taught all of us is to not take this game for granted. Not being able to do it for 12 months, I know the excitement I have, and I won’t be on the ice. I don’t think emotion will be a problem.”

Having to create that emotion without a crowd is another skill these players can develop this season. It’s one that should pay off when fans are able to come back to the arenas.

Emotion may come easier than one might think when you consider the schedule being played. The U.S. Division has some well-established and heated, rivalries. The heat is already there, fans or not.

“There’s always some bad blood between Everett and Portland,” Ciona says. “I think it’s going to be getting in those games, getting riled up for those. It’s kind of like the Battle of Alberta here. That’s still pretty heavy even without fans. It’s going to be fun to play those rivalry games even if we don’t have a crowd.”

Another big adjustment for players will be the safety protocols required to play. They’re aware that the NHL has had its share of troubles with Covid cases popping up which has led to the postponement of games with a lot of questions and scrutiny.

The WHL doesn’t want the same hurdles, and it will require both the clubs and the players to follow the protocols and stay safe.

WHL teams have been in touch with their players during the shutdown, reminding them of the seriousness of staying safe. The motivation should be easy. Having missed over a year of hockey, getting players 16 to 20 years old to toe the line should not be too hard.

“It’ll be hockey, hockey, hockey,” Ciona says. “There won’t be anything else going on for us. We’ll be coming from our billets to the rink every day. We won’t be out getting distracted by the malls or tourist things. We’ll be locked down, focused on hockey and being safe.”

Eye on the next level

Staying safe and getting the full season in is important to Ciona.

Like many players in the U.S. Division, this is his NHL Draft season. He’s on the radar, having received a ‘C’ ranking by NHL’s Central Scouting. Being drafted is a dream for every young player, but so far this season, he has not been able to be seen by NHL scouts.

Getting 24 games will go a long way for him to show off his progression from last year. He’s not alone. This coming season is going to give other Draft hopefuls a chance to shine for the pros as well.

“I want to be higher on that list,” Ciona, who had 13 points in 53 games as a rookie last year says. “I don’t want to be a ‘C’ prospect. It was cool and humbling to see my name and see that some of my hard work got noticed, but that’s not the end game. I want to continue to push and get myself higher on that list.”

First time NHL Draft eligible players are not the only ones who will benefit from playing this season.

There are many players in the Division who were passed up the last Draft, sitting on the NHL bubble. They are still eligible to hear their names called during this year’s Draft which is scheduled for July. Continued development could push them over the line but could also lead to a free agent signing, getting to play pro in Europe, or in Canadian college.

Incoming rookies will also get valuable ice time and a taste of the higher level of play the WHL offers. These are players that will be looking forward to the 2022 NHL Draft as well as restocking the U.S. Division and league with more talent.

Development is the key to this season but that doesn’t mean teams aren’t looking to win. There will be no playoffs to aim for, but hockey players and general managers alike are hyper-competitive, so winning is still number one.

“If they kept score in the warmup, we’d win that,” La Forge says.

Seattle will ice a young team that is loaded with talent and potential. They’ll be competitive but will have to deal with good teams such as the Portland Winterhawks – last year’s U.S. Division champions – and the always tough Everett Silvertips.

It’s going to make for a fun sprint of a season that will provide entertaining games for fans who will either have to watch online or on television. The coaches, general managers, and players will be ready to go on March 19th.

“I want to win every single (game).” Ciona says. “Obviously it’s a bummer there won’t be any playoffs, but I still want to win them all. We’re competitive, that’s been our identity and we want to show that. We don’t just want to get through the 24 games, we want to dominate.”