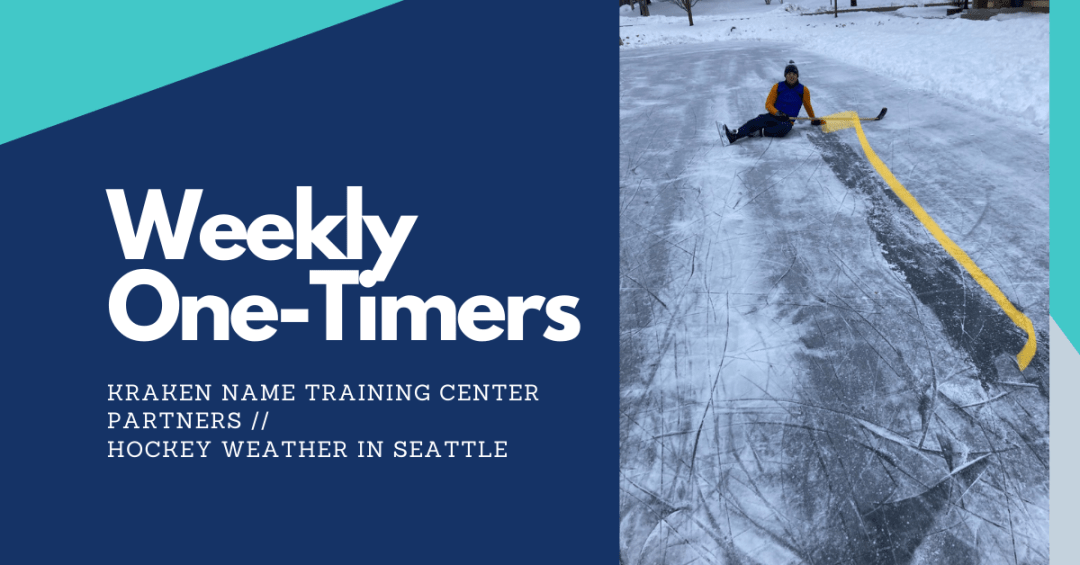 Finally, some hockey weather in Seattle! Man, imagine if it got cold enough here to freeze the ponds and lakes and create outdoor rinks in parks with just a simple flooding of an open field. Some of us would never come inside during the winter. Then again, even more of us would likely flee the Emerald City because of a general disdain for such atmospheric conditions.

Regardless, I—a good Minnesota boy—welcome with open arms the falling of fresh snow, something we rarely see in Seattle proper.

Having said that, here’s what happened the last time I skated on an outdoor rink (or ODR as the kids are apparently calling it these days).

You might be wondering how I got here, and how I created such a long skidmark on the ice.

Well, I was racing my sister around a pond—as two well-adjusted adult siblings would do—in northern Minnesota about a month ago, going just as fast as my goalie skates would carry me. If you’re unfamiliar, goalie skates come to a toepick-like point at the front. At full tilt, I inadvertently kicked the point of my right skate into the ice and flew like an ungainly Superman, slamming down HARD on the ice. The Carmex in my pocket did not survive.

It wasn’t my proudest moment, and I certainly felt the impact for days to come.

Nonetheless, in these Covid times, being outside on an ODR truly is like a brief trip to a very chilly heaven. On days like these in Seattle, it’s easy to daydream of a place to lace up the skates in nature.

It may not be in nature, but there will at least be a new place to lace up the skates within the next six months, and it will be used to expand Seattle’s budding hockey community. The Seattle Kraken’s three-sheet Northgate practice facility is coming along nicely, and the team announced some interesting community-centric partners this week.

You may recall press conferences from way back in 2018 when the team now known as the Kraken was simply called “NHL Seattle.” At several of those events, Jaina Goscinski, a young player from the Washington Wild Female Hockey Association (WWFHA), stood alongside Kraken CEO Tod Leiweke. She helped Leiweke evangelize the Pacific Northwest as a marvelous hockey market yearning for the league’s 32nd franchise.

Fast forward by two full years and one pandemic, and the Kraken didn’t forget about the WWFHA. On Tuesday, the team announced that it is partnering with the WWFHA as well as the Greater Seattle Hockey League (GSHL) to provide a home base for both organizations within the friendly new confines of the Kraken Training Center.

The WWFHA teaches the game to girls and young women from age four up to 19. The GSHL is the area’s largest adult hockey league with more than 3,000 participants. As a proud member of the GSHL’s Fighting Narwhals, I was pleased with this announcement.

Read all about it here.

The Kraken also teamed with the Black Girl Hockey Club (BGHC) to sell beanies through their team store this week, with all proceeds going to the organization. The BGHC helps fund the costs of playing the sport for young Black women and girls and works to disrupt racism on and off the ice.

The first shipment of beanies sold out almost immediately.

On and off the ice, twin sisters Jocelyne Lamoureux-Davidson and Monique Lamoureux-Morando are hockey legends. Both 31 years old, they have decided to call it quits on a pair of illustrious careers with the US national team.

The sisters experienced their greatest on-ice triumph at the 2018 Winter Olympics in PyeongChang, where they played a huge role in defeating Canada to help the Americans win their first gold medal since 1998.

Then read this whole story.

It’s been no secret—and we’ve actually talked about it in the last two Weekly One-Timers posts—that the Pittsburgh Penguins have been looking to quickly fill their vacant general manager role after Jim Rutherford abruptly announced his resignation on Jan. 27. Lots of retreads were reportedly being considered, along with a few would-be newcomers to the GM circle.

In the end, Mario Lemieux and company opted for not just one retread but two. They hired Ron Hextall, the former feisty netminder and GM of the cross-state rival Flyers, to lead the team with Brian Burke, the ornery former GM turned TV personality, serving as President of Hockey Operations.

Pittsburgh is at an interesting juncture in its life cycle of winning. The team’s two veteran superstars are aging and are no longer considered the best players in the world. The Penguins have also been exiting the postseason in progressively earlier rounds each of the past three seasons since winning two consecutive Stanley Cups. Can Hextall and Burke get the team back into true contender mode, or is it time to start thinking about the next life cycle?

The Dallas Stars have issued a statement for some reason

This week, eccentric billionaire and Dallas Mavericks owner Mark Cuban made waves by asking his team to stop playing the national anthem before games. The NBA quickly reversed Cuban’s course for him, requiring teams to play the anthem.

The Dallas Stars offered an unsolicited statement on the matter.

Not agreeing with Cuban is one thing, and it’s totally fine to do so. But from the Stars’ standpoint, this is one of those situations where it would have also been fine to just say nothing and keep going about your business and nobody would have batted an eye.

At least they have these neon green uniforms.

Glove save(s) and a beauty

Speaking of Vegas, Marc-Andre Fleury made an otherworldly save on Thursday against the Ducks.

What a recovery after missing with the pokecheck. A save like that is a sign that a netminder is feeling it.

Tuukka Rask gave his entry for save of the year as well this week, committing highway robbery on Mika Zibanejad.

As long as we’re talking about “of the year” candidates, we might as well throw in a couple of nice tallies from former Seattle Thunderbird Mat Barzal and his teammate Casey Cizikas.

Yes, those goals were both scored in the same game, and yes, the Islanders lost that game in a shootout.

The Red Deer Rebels, who are preparing to start their 24-game WHL season on Feb. 26, will spend the duration of the shortened campaign living in suites at their home arena.

Hey, it makes for a short commute.