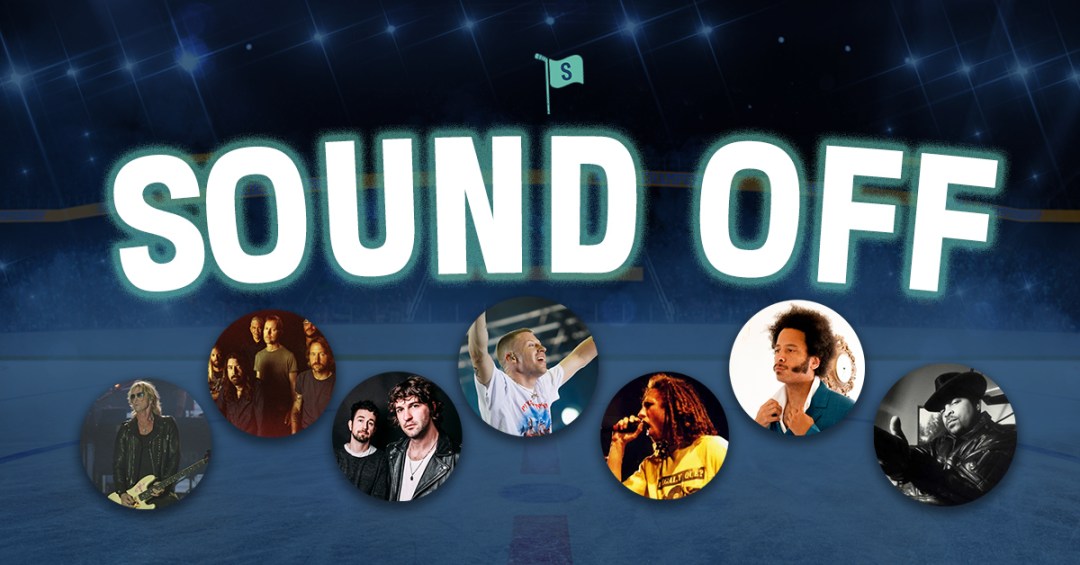 From choosing its team nickname to selecting the players in the 2021 NHL Expansion Draft, we haven’t been afraid to tell the Seattle Kraken what to do.

With that in mind, let’s veer off the ice and into the minutiae of game presentation for some of the most important decisions the club will make before its first game: selecting the correct arena music.

After going without fans – or few fans in some cases – in NHL arenas for more than a year, generating maximum energy in home rinks will be vital components to team success next season. We know Seattle fans can be loud, but a good soundtrack will help produce a top-notch sports atmosphere when the Kraken hit the ice.

Certain songs are inextricably associated with sports teams, producing a signature sound that defines a club and becomes a part of their identities. “Gloria” became the St. Louis Blues’ victory song after it represented a key moment in their turnaround from last place team to Stanley Cup champions in 2019. Every visiting team loathes to hear “Chelsea Dagger” play in Chicago because it means the Blackhawks scored again. Manchester City fans sing “Hey Jude” before games and after victories at Etihad Stadium. “Sweet Caroline” gets Boston Red Sox fans singing along in the eighth inning at Fenway Park. West Ham has “I’m Forever Blowing Bubbles.”

While we trust the folks at KEXP to be up to the task, Sound of Hockey’s writers have some sound opinions about what the Kraken should play for their pregame introductions, goal celebrations, victory revelry and more.

Everyone appreciates good music curation. Consider this to be a carefully crafted mixtape we’re sharing with you. So let us know what you think of our playlists in the comments area at the bottom of this page, and tell us what songs you believe the Kraken should use to get Climate Pledge Arena rocking.

Introduction song: “Can’t Hold Us” by Macklemore and Ryan Lewis

I know it’s been struck down by some on the Sound Of Hockey Podcast, but this one’s a no-brainer to me. “Can’t Hold Us” will get the audience fired up like no other song and blow the old roof off The Pledge. The music video even has a winter motif and ends up atop the Space Needle. The punchy “nah, nah, nah, nah, nah-na-na-na” parts just invite fans to sing along with all the gusto of European football fans. Macklemore is a part owner of Seattle Sounders FC and a loyal fan of all Seattle sports teams, although he might have some explaining to do about the jersey he wore at a 2017 concert up in Vancouver.

A goal song will, hopefully, be played a lot. It needs to be an appealing earworm that people won’t get sick of. If I was sentimental for a hockey-themed song, I might lean toward something from the Tragically Hip or Warren Zevon’s “Hit Somebody.” Despite the nostalgia of Seattle Thunderbirds fans, going the Gary Glitter “Rock ‘n’ Roll Part 2” route won’t fly even with a chorus that has some na-nas or yeah-yeahs to sing or chant with.

I considered Jimi Hendrix, Heart, Nirvana, Pearl Jam and other Seattle music greats but kept coming back to “Everlong.” You get about 35-40 seconds to use after the red light flashes, which is perfect for the guitar and drums build-up near the end and through the last chorus:

This one is a little obscure, but it’s a catchy sports anthem that is Seattle in its heart. McKagan is a class act and a hardcore sports fan (full disclosure: I was his editor when he wrote a column for ESPN.com) who bursts with civic pride for his hometown. I admire and respect McKagan immensely for surviving his own incredible personal comeback and for being a man of character. And this song kicks ass. Forgive me for going a little Ron MacLean on you again:

I hate clichés and always look for a different approach. My choices are not going to be popular, but that is precisely the point. I want Seattle to have a truly unique experience. My desire is that these songs are distinctively Seattle across all of hockey. I do not hate Macklemore’s music, but the fact I hear him in literally every hockey arena I visit including Angel of the Winds Arena for Silvertips games and accesso ShoWare Center for Thunderbirds games disqualifies him from my list, regardless of his Seattle roots.

Introduction song: “You On The Run” by The Black Angels

For the intro song, I want something dark and ominous as the legend of the Kraken. It will be loud, and I want it to strike fear in the opposing team’s hearts and minds. I want the visiting team to be defeated before the puck is even dropped.

The goal song needs to hit you right away with no build up. It also needs to be fun and might unknowingly get people moving when they hear it.

Honorable mention: “Second Skin” by The Gits, “Time for Livin’” by Beastie Boys

Victory song: “OYAHYTT”  by The Coup

The victory song gets people moving and shaking. The right song could get some fan participation. Imagine a fan chant of “Oh yeah, all right, hell yeah, that’s right” after the Kraken seal the victory.

Honorable mention: “Stranger to my Happiness” by Sharon Jones and the Dap-Kings, “Cherry Bomb” by The Runaways, “Fashion” by David Bowie

I hate most popular music so I’m going to go off the board but still try not to venture too far out into left field for Kraken songs. Hate is probably too strong of an emotion, but I find most pop music boring and its use at hockey arenas is overdone and obvious. We have a chance to tap into some great bands that don’t get regular airplay. So, let’s do that.

Introduction song: “The Nights of Wine and Roses” by Japandroids

This could be the ultimate get hyped song by a pair of Canadian maniacs. Yes, just two guys make all this beautiful noise. But what else to get the crowd going than a line like “We yell like hell to heavens.” Japandroids are from Vancouver, B.C., which could be problematic because the Canucks have used some of their music in the past. But Seattle is obviously better.

Most people know Devo from “Whip it” and nothing more. That was probably their least interesting song. “Uncontrollable Urge” is one of their better tunes. It’s fast, upbeat and imagine the Climate Pledge crowd all yelling “yeah, yeah, yeah, yeah” along with this classic track. It has goal song written all over it.

We all like sunshine. We’d all love it every day. What a happy, uplifting song to celebrate winning. It’s got horns, bass, funk, ska, and most importantly, it’s fun. This tune starts strong and builds up to pure joy by the end.

Fight song: “Some Hits Hurt” by The Cute Lepers

A Seattle band with a fun little song that would be the perfect soundtrack to a tilt on the ice. It’s fast paced, and when they chant “one hit” it will perfectly frame any scrap on the ice that usually ends with one hit.

Unlike some of my fellow Sound Of Hockeyers, I’m not too concerned with picking “popular songs” as long as they fit the situation. Several of these songs feature ties back to the Seattle music scene and they all, in my humble opinion, kick ass.

Tipping a cap to Seattle’s music history with legendary frontman Chris Cornell of Soundgarden and Temple of the Dog fame, this song from Audioslave features a perfect build-up, is extremely upbeat and would set the tone in the arena before Kraken home games. Ignore that the song is about an Apache chief, I think it’s a good fit for a team introduction that isn’t very cookie cutter.

Runner-up: “You Think I Ain’t Worth a Dollar, But I Feel Like a Millionaire” by Queens of the Stone Age.

What it probably will be: Some intense mashup from “Pirates of the Caribbean.”

Goal song: “Bulls on Parade” by Rage Against the Machine

In this scenario, Tom Morello – who is also the lead guitarist of Audioslave – will be prominently featured at Seattle home games. In this instance, this iconic guitar riff from Morello would be a treat to hear after the Kraken’s goal horn.

Runner-up: “The Other Side of Paradise” by Glass Animals.

What it will probably be: Something by Nirvana, Soundgarden or Pearl Jam.

This groovy guitar riff from Seattle icon Jimi Hendrix would be a perfect fit at Climate Pledge Arena. The song is catchy, upbeat and popular enough to hold the distinction of the Kraken’s victory song, but the lyrics may be a dealbreaker (not sure what Purple Haze has to do with a sea creature – or hockey for that matter).

Runners-up: “Daft Punk is Playing at My House” by LCD Soundsystem and “aNYway” by Duck Sauce.

What it probably will be: Something by Macklemore.

When visitors take a penalty: “Man in the Box” by Alice in Chains

With it being topical and its Seattle ties, I couldn’t resist.

When Seattle takes a penalty: “Dirty Work” by Steely Dan

Introduction song: “Guerrilla Radio” by Rage Against the Machine

Picture this: The lights go down in Climate Pledge Arena. A hype video plays on the state-of-the-art triangular scoreboards, with “Guerrilla Radio” blasting. Then, in sync with the 2:58 mark of the below video, the screens go black. The arena is filled with complete darkness.

Goal Song: “Can’t Hold Us” by Macklemore and Ryan Lewis

Screw it, I’m doubling down.

I’ve taken a lot of heat on the “Sound Of Hockey” podcast for my opinion that this should be the goal song, with John and Andy claiming that it’s far too common in sports arenas. Fine. But you know what? It gets the people going! And other arenas don’t have the local ties to Macklemore that Seattle does. Yes, it’s a bit cliche. But also, yes, it would work great as a goal song. There’s literally a clap-and-sing-along portion built in.

I was running the Disney World Marathon at the beginning of 2019, struggling mightily around mile 18. I heard “Can’t Hold Us” playing as I shuffled through a miserably long stretch between Disney’s Wide World of Sports and Disney’s Hollywood Studios. Suddenly, my feet were hitting the ground to the beat of the music, and I was back in the game in every way. If that’s not proof that it gets the people going, then I don’t know what is.

And if you’re among the poo-pooers of this fine ditty, then go listen to John’s selections in this post and good luck cleaning up the blood that will surely come out of your ears.

Why not? A victory song should just be fun. Ringo’s songs are generally the less-beloved of Beatles songs, but this one is a banger. And how many songs are out there about cephalopods?

No real Seattle connection on this one that I know of. I’ve just always loved it and think it would be funny to play it after the team falls.