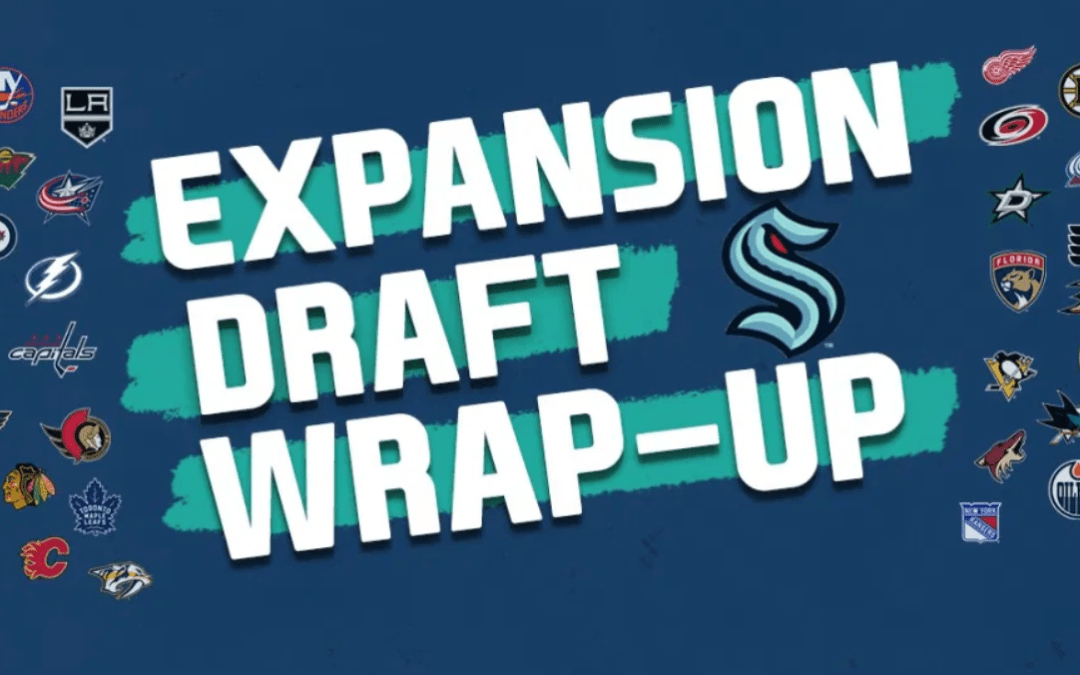 Well, gang, it took three whole months, but we finally did it. We successfully profiled all 30 of the teams that will be participating in the 2021 Seattle Kraken Expansion Draft.

We at Sound Of Hockey have put our blood, sweat, and tears into this thing, and we’re very proud of the product. It’s been a true labor of love. But while we’re all happy to have made it to the end of this arduous journey, we also are left wondering, What the hell do we write about now? After all, players won’t be selected for another 163 days according to @KrakenCountdown, the Twitter-based authority on such matters.

Fear not, faithful readers, for we shall milk this Expansion Draft for every last drop of delicious content until the inaugural Kraken roster is officially selected on July 21. And after that? Oh, you better believe we will break down each selection from every angle until we’re deep sea blue, ice blue, boundless blue, shadow blue, and red alert in the face (those are the official Kraken colors in case you weren’t following).

Jokes aside, we recognize that our projections are subject to change in their feasibility. A simple flick of the pen on a new contract, an injury, a trade, or even poor or exceptional play from an individual can drastically alter a team’s plan going into the Expansion Draft. That’s why we will continue to monitor and update our projections right up until the eleventh hour.

For now, we thought it would be a good idea to wrap up this massive project with some highlights for the too-long-didn’t-read folks, of whom there are certainly many.

**Editor’s Note: We have not included any goalies here, because there will be yet another article updating the Expansion Draft netminder landscape in the coming weeks.**

The Kraken will need to look for a mix of older veterans with minimal term remaining on their contracts, players in their primes on reasonable deals, and young guys with oodles of upside.

There will be at least a couple higher-priced veterans selected because Seattle has to hit a minimum of 60% of the $81.5 million salary cap. So the Kraken need to select at least $48.9 million worth of contracts, and they simply can’t reach that number by picking 30 players making the league minimum.

Here’s a list of some of the biggest and most fascinating veteran names that Sound Of Hockey identified as perhaps being available to Seattle in July. If any seem far-fetched, click on their team’s link at the bottom of this story to understand our reasoning for why they may be available.

Some of the above will be unrestricted free agents after the 2020-2021 season, and including such players on the “available” list is frankly a bit of a stretch. If we were the Kraken, we would be focusing on players with term left on contracts that carry reasonable cap hits, rather than using up our selections on free agents that will want top dollar to lure them to forgo the open market.

Even so, there are a few UFA’s who—if still unsigned by their current teams on July 19—would be worth considering.

Taylor Hall is a great example of this. Hall is a bona fide star in the prime of his career. He signed a one-year, $8 million deal with the Buffalo Sabres during the offseason. For Kraken general manager Ron Francis to select him, Hall needs to remain a free agent at the end of the current season, then agree to a deal with Seattle in the team’s 48-hour exclusive negotiating window just before the Expansion Draft. If Francis can sign Hall, then the Kraken would use their Buffalo selection on Hall.

Like all other UFA’s, Hall can sign an extension at any time with his current team. If that happens, then Buffalo will surely protect him from the Expansion Draft, and this all becomes moot.

Seattle has not been shy about its quest to build the NHL’s best analytics department to work hand-in-hand with what it hopes is the league’s best pro scouting staff. Being that players early in their careers inherently have smaller bodies of work, the young players that the Kraken select in the Expansion Draft is where those departments will really show their mettle.

As Vegas proved in 2017, there are diamonds to be found in the rough.

Here are some of the younger players we projected to be available.

Speaking anecdotally, one thing we noticed in this exercise is that the better the team—or perhaps the more challenged a team is by the salary cap—the less obvious it is which players will be good picks for the Kraken from that roster.

A great example is the Detroit Red Wings. They have been terrible the last few seasons and are in the midst of a full rebuild. There really are no veterans that will be both exposed and worth taking for Seattle, so the Kraken will be trying to find a guy with upside that either hasn’t been given a real chance at the NHL level or has been miscast when called upon.

At the other end of the spectrum is a team like Carolina. Unlike the Red Wings, the Hurricanes have exceptional depth. Look for the Kraken to get a guy who may not be a household name now, but could play a big role on a team with fewer skilled players. These are the types of players that could develop into cornerstones for Seattle.

Here are a few players that we identified as potential Kraken targets that have ties to the Pacific Northwest.

Here are all of our Expansion Draft profiles. Thanks again for riding along on this journey. There will be more to come as we prepare to welcome the inaugural Kraken roster to Seattle.