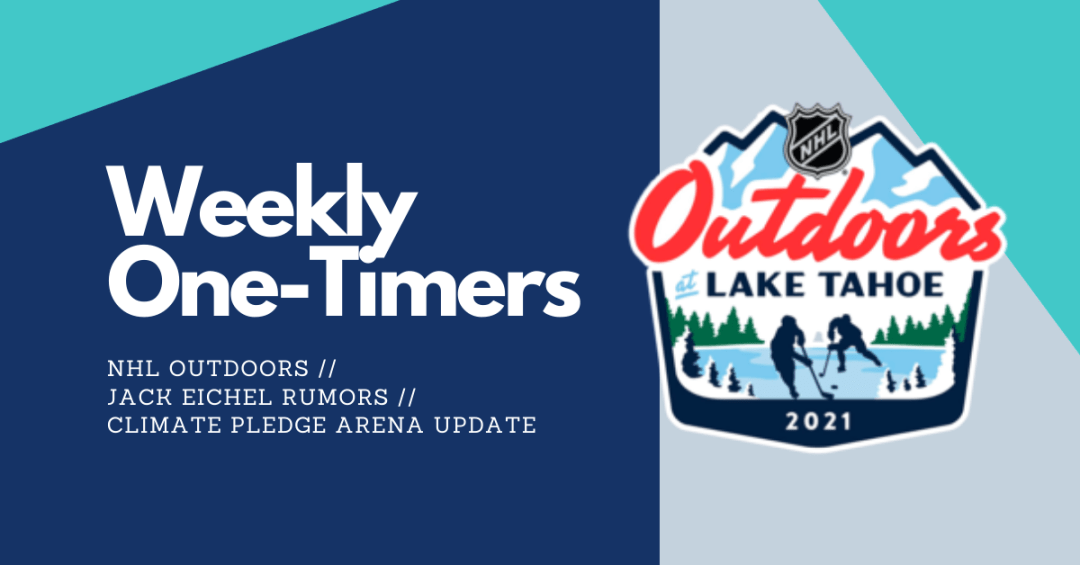 It was a pretty quiet news week on the Seattle Kraken front, but the team did put out the below video showing that the tunnel into Climate Pledge Arena has been completed.

The tunnel will allow trucks to pull right onto the arena floor, making for easier set-up for large-scale events. Perhaps the most exciting part of the video, though, is the image of the future Seattle Kraken home as a whole. It’s getting there, folks.

In case you’re missing Saturday’s outdoor game at Lake Tahoe between the Vegas Golden Knights and Colorado Avalanche, you’ll have another chance to take in the stunning imagery on Sunday when the Philadelphia Flyers face the Boston Bruins on the same makeshift rink. Read Andy Eide’s preview of the games here.

Nick Cotsonika has had some breathtaking photos on his Twitter feed the past few days.

I have a bone to pick with the Colorado Avalanche, though. This team has been wearing heinous blue pants that really don’t match with either their home burgundy uniforms or their road whites. The general understanding around the hockey universe was that since Colorado’s Reverse Retro jerseys are throwbacks to the Quebec Nordiques, the blue pants would eventually make more sense once those kits were put into game action.

So what do the Avs do? They show up to NHL Outdoors in BURGUNDY PANTS! WTF?!?

You’re telling me they could have been wearing burgundy pants all season long—which clearly would match better with both of their typical uniforms—and yet they continue to trot out in those blue monstrosities? Unacceptable. Sound Of Hockey demands an explanation from the Colorado Avalanche on this matter.

Back in September, Bobby Margarita briefly came out of “retirement,” or whatever he’s calling it, to drop a classic Bob Bomb via a long Twitter thread starting with the below.

The gist of the thread is that what he was hearing was just a bunch of nonsense. But some of us here at SOH wondered at the time if there was any smoke to go with that fire, because frankly, why would Bob tweet about that at all if there really wasn’t anything there?

Before we move on from the Thompson play, it’s also remarkable how Tom Wilson reacted after receiving that generous gift in front of the net, but that’s beside the point.

Ok, back to Buffalo. The stinkiness of the Sabres has reignited the trade rumors surrounding Eichel, and as yet another Buffalo season heads down the trash chute, one can’t help wondering what happens with Taylor Hall as well. Remember, he is on a one-year deal, and we at Sound Of Hockey had surmised that he could end up a candidate for joining the Kraken as a free agent in the 48-hour negotiating window prior to the Expansion Draft. Hall will certainly be on the block at the trade deadline too if things don’t take a turn for the better in Buffalo very soon.

The Arizona Coyotes are still a mess

Optimism was in the desert air when billionaire businessman Alex Meruelo bought the Coyotes back in July, 2019. In his introductory press conference, he famously said, “We’re Coyote Nation, we want to win, and I sure as s**t want to win.”

The incomparable Katie Strang released a fascinating exposé in The Athletic this week documenting in great detail what has transpired since Meruelo’s purchase of the franchise. Let’s just say the optimism of 2019 has left the building.

Strang indicates some pretty serious financial issues, from missed payments to players, staff, and partners to shady business practices. She also paints a picture of a toxic work environment for staff that’s marred by finger-pointing, fear, and even some occasional harassment.

Strang goes so far as to point out that she herself was threatened by Coyotes general manager Bill Armstrong. “After delivering a lecture on journalism ethics, Armstrong asked this reporter what she thought would happen if he were to tell general managers around the league how she did her job.”

Mike Babcock is apparently, uh… back… in… the… game?

The ECHL’s Brampton Beast is (are?) ceasing operations, citing the seemingly endless economic challenges associated with the COVID pandemic. The Beast lasted seven seasons and served as an affiliate for the Lightning, Senators, and Canadiens at different stages. Brampton was also the subject of one of the best hockey articles ever, written by Scott Wheeler on his time embedded with the team in 2018. RIP, Beast.

To lighten the mood, check out these dirty dangles by young Elyssa Biederman.

[Record scratch, freeze-frame, linesman Ryan Galloway narrating]: “You might be wondering how I got here.”

No, Galloway did not get hit with this shot, and yes, Seth Jones did score here.