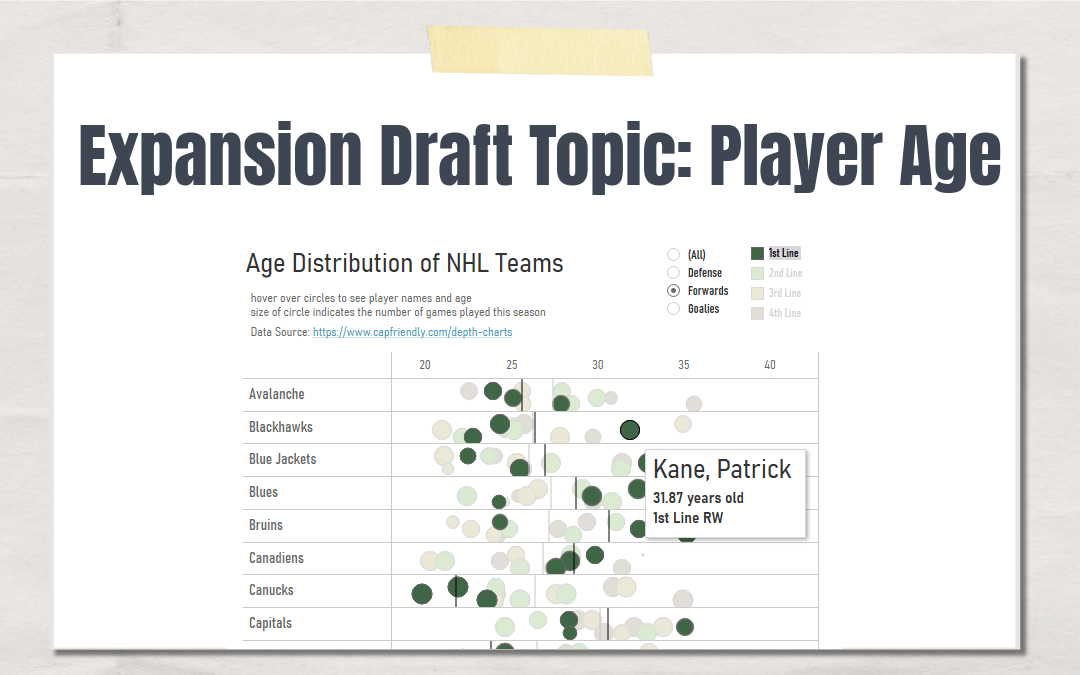 As the Seattle Kraken hockey operations team looks toward the Expansion Draft, the age of each NHL player will factor into their selections. On Saturday, we posted a broad look at the average player ages of NHL teams, but that just scratches the surface of understanding how teams are constructed. Today, we take a deeper dive into the ages of players and wrap it up with how this could factor into the Kraken’s selection process for the Expansion Draft.

Average age by position and line

Let us start by looking at the median ages of NHL players by position and how they stack up on depth charts.

A couple interesting points to call out here. First, the youngest line in hockey tends to be the first forward line with a median age of 25.8 years old. Conversely, the oldest line is the fourth forward line. Last, the median age of goalies is older than any of the forward or defense lines. This makes sense, since goalies typically take so much longer to develop than skaters.

Average ages by team and line

Here are a couple fun call-outs when looking at this data:

Here is a data visualization you can use to dig into the detail of age distributions by team.

Player age alone will not be a deciding factor in the Kraken’s selections in the upcoming NHL Expansion Draft this summer, but it will be a component in some of the decisions to be made. An important piece in incorporating a player’s age in the decision-making process is how many years are left on a player’s contract. How might the players contributions decline over the remainder of the deal?

Both players are expected to be exposed in the Expansion Draft. Even though Brown is two years older, he probably carries the least amount of risk between the two because he only has one year remaining on his contract. In the salary-cap-strapped era the NHL is going through, Brown would probably be more tradeable at the trade deadline next season since teams only need to fit his salary in for the remainder of the year.

The Kraken will also need to evaluate players that are just entering the NHL to forecast what their upside might be. In San Jose, both Dylan Gambrell and Alexander True should be exposed in the Expansion Draft. Both play center. Gambrell is one year older than True and has been a regular in the Sharks lineup this year. True has played this season in the AHL and has five points in six games. They seem to have very similar capabilities, but does the one-year age difference change any of the NHL projections for either player?

We will find out in July.

The data source used for this story was a combination of CapFriendly Depth Chart data and NHL.com roster information. For a deeper analysis on aging curves, check out this post from a few years ago on Hockey Graphs.