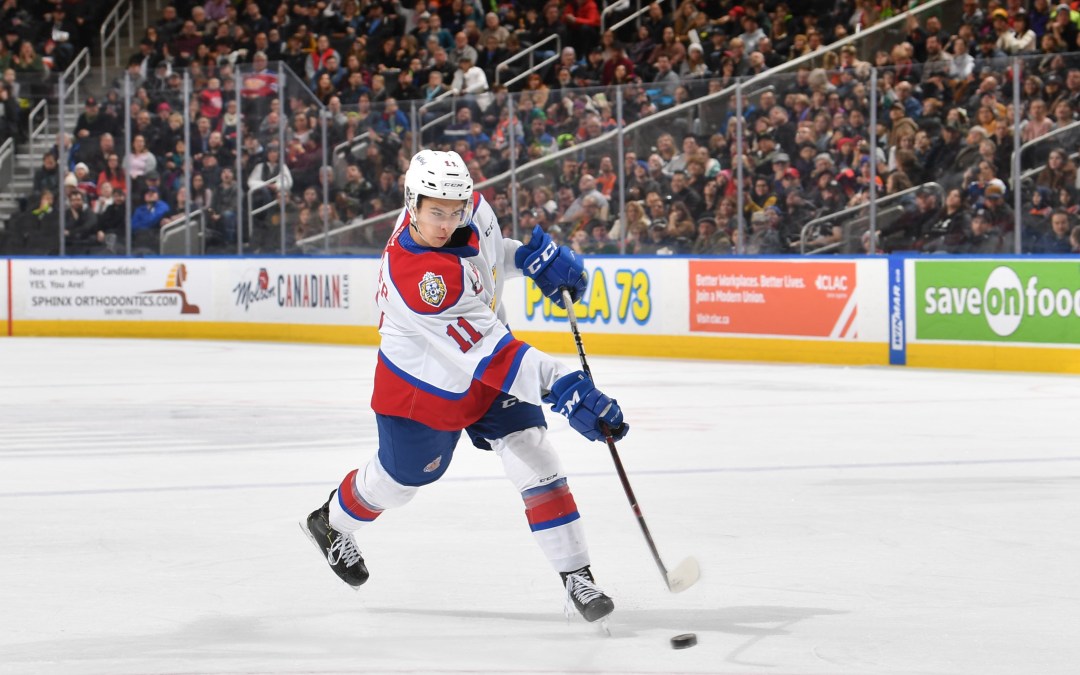 It didn’t take Dylan Guenther long to make up for lost time. In fact, it took less than two minutes. At the 1:47 mark of the Edmonton Oil Kings’ season opener Friday, the 2021 NHL Draft prospect banged home a power-play goal.

He was just getting started.

With the Western Hockey League back on the ice after nearly a year-long hiatus, Guenther’s hot start is solidifying him as one of the top prospects for July’s draft. He may be a player the Seattle Kraken have circled to be their first pick ever.

Guenther followed the early marker with an assist 45 seconds later and would finish the game with a pair of scores and two assists. The next night he matched those totals to earn the season’s first WHL Player of the Week award with eight points in two games.

If you talked to him 24 hours before the season opener you wouldn’t be surprised.

“Everyone is super excited to play and we have a lot of adrenaline,” he said the night before. “The guys will be buzzing on the first couple of shifts.”

The WHL is playing a shortened 24-game season focused on player development. Winning games is still important – and the Oil Kings started 2-0 – but so is being seen by NHL scouts for a guy like Guenther.

Waiting around to play has been stressful for everyone involved. It’s Guenther’s draft year, he needed to be seen by scouts, needed them to see the step he has taken after an impressive rookie campaign where he scored 26 goals.

“The whole uncertainty of the year was leaning on my shoulders a bit,” Guenther, 17, admitted. “I felt that, but I think I took that time to better myself and better my game and I’m excited about that.”

Dylan Guenther by the numbers

Playing in the WHL at 16-years-old is tough.

The jump from minor hockey to playing with NHL prospects can be a monumental one, but it’s one that Guenther made with ease last year. It helped that the 6-foot-1 winger had a brief call-up at the end of the previous season. He not only got his feet wet but produced by scoring three goals – including a game-winner – in eight games.

Last year he exploded. Along with the 26 goals he piled up 33 assists for 59 points in 58 games on the way to winning the league’s Rookie of the Year award. He chipped in on the power play as well, scoring eight times with nine assists.

It was a campaign that put him on the NHL’s radar and he ended up an A rated prospect when NHL Central Scouting’s watchlist was published over the summer.

Being considered for the top of a draft is not a new experience for the Edmonton native. The Oil Kings selected him with the first overall pick in the WHL’s Bantam Draft in 2018.

“Going into the Western League draft I just tried to play my game to the best of my ability,” Guenther said. “Just blocking out the outside attention is important. This is obviously a much bigger scale, but I think if I play my game and play the right way everything will fall into place at the end.”

What kind of player is he?

Speed, skill, with a scoring touch are attributes that describe Guenther’s game. He sees the ice well and can distribute the puck.

He has played on the wing with the Oil Kings but says that he can, and is comfortable, playing as a center.

“I’m a guy who plays with speed and I see the ice well,” Guenther said about his game. “I think my hockey IQ is the strongest part of my game, whether its finding open ice to jump into or creating space myself to score goals. I’m an offensive player. I have to work on my strength, with that will be my play along the boards.

He’s the kind of player that puts pressure on the defense and attracts defenders to him.

That was on display Friday night with the play below. His teammate, St. Louis Blues prospect Jake Neighbours, takes a hit to get the puck to Guenther along the boards. Three defenders skate towards Guenther which leaves a teammate wide open in the slot.

Guenther easily flips the puck across ice, past the defenders for his mate to score an easy goal. Pick your poison with this guy.

“I really like Dylan,” one NHL scout says. “He plays with really good speed and loves to attack the net off the rush. Along with that he plays a responsible three-zone game.”

The Kraken are promised a pick in the top six of the upcoming NHL Draft, depending on how the lottery balls bounce.

Guenther will be one of many talented players in the mix for general manager Ron Francis and his scouting team. Depending on which draft prognosticator you prefer, Guenther is ranked anywhere from the 10th best prospect up to one of the top three picks.

A lot of scrutiny and pressure comes with being a top prospect and he heard from 15 to 20 teams over the offseason. He’s playing with a couple of players, such as Neighbours who was selected by the Blues in the first round of last year’s draft, which will make it easier.

“It helps having a couple guys go through it before you,” Guenther said. “Just the way they handle themselves both on and off the ice. They conduct themselves like pros and that’s something I like to do and something I learned off them.”

These 24-games will be big for Guenther’s future.

He’ll finally be seen by scouts after waiting a year. He probably won’t continue at a four-point-per-game pace, but his skill will be on display and Edmonton is poised to win a lot of games.

How high he goes remains to be determined and he has no preference as to which team selects him. That team could be Seattle, which would make Guenther a part of Kraken history as the first-ever pick by the league’s newest franchise.

“The thought of that is crazy,” Guenther said. “An expansion team, I remember when they got announced. It’s super exciting. I remember their whole process. They have a logo and I really like the logo. It’s cool. I’ve never been to Seattle, but I’ve heard it’s a nice city. That would be pretty cool.”