NHL contract extensions that could shape the Expansion Draft 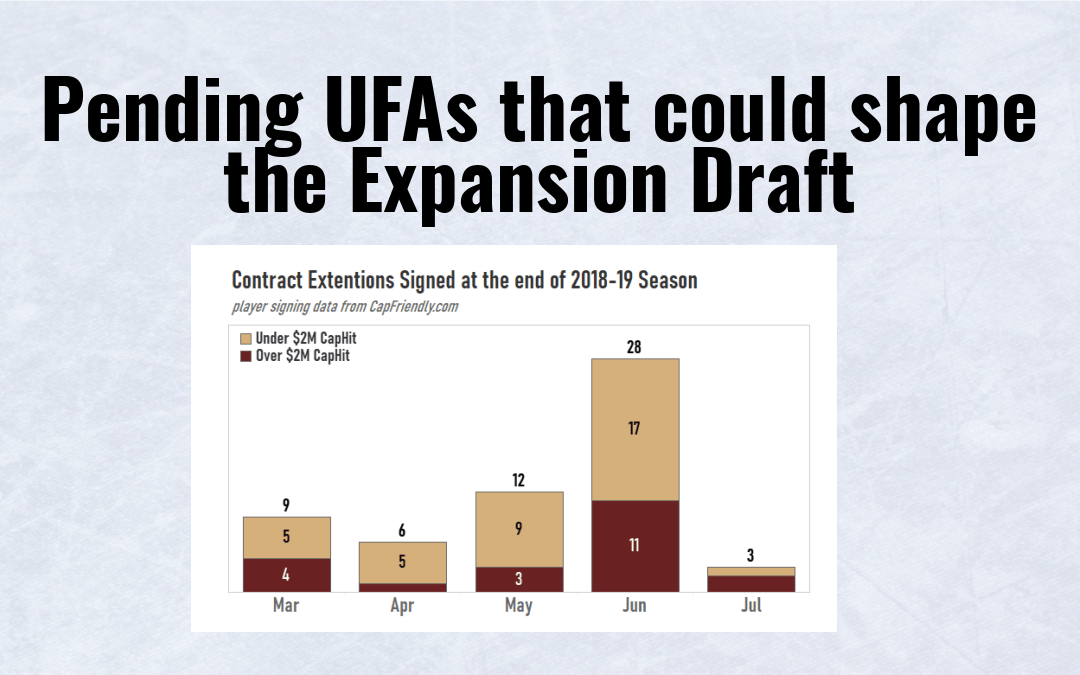 Any trades between now and the NHL trade deadline on April 12 should help solidify the 30 rosters of teams participating in the NHL Expansion Draft in July. But Kraken fans should also be keeping an eye out for several potential extensions and therefore additions to protected lists across the league that could also shake up some Expansion Draft rosters.

Here are seven teams with potential player contract extensions that could shape their protected lists in preparation for the Seattle Kraken Expansion Draft.

The 27-year-old Hamilton is second in points on the Hurricanes this season and is a big reason behind their success. Re-signing Hamilton is a priority for the Canes and is likely to happen. This will add Hamilton to the defenseman protected list with Jaccob Slavin and Brett Pesce. With the three protected defensemen accounted for, this will expose young prospect Jake Bean who has been cracking the Hurricanes lineup more often this season.

Saad and Landeskog are both 28 years old and having productive seasons for the Avalanche. Saad is playing his first year in Colorado after being acquired last offseason in a trade. Landeskog has played his entire career in Colorado and is the captain for the Avalanche. Saad has signaled that he would like to re-sign in Colorado, but the team might only have room for one of the two. If that is the case, then it is probably the captain Landeskog that remains. If the Avs manage to sign both Saad and Landeskog it might force them to expose 23-year-old forward Tyson Jost and solid defenseman Devon Toews from which the Kraken will have to choose.

RNH has been a pillar in the Oilers’ forward core since he was the first overall pick in the 2011 NHL Entry Draft. It’s hard to get a read on contract negotiations out of Edmonton, but his market value might prove too rich for general manager Ken Holland. If Nugent-Hopkins makes it to free agency, the Oilers will likely protect forward prospect Tyler Benson who has gotten off to a good start in the AHL.

Palmieri has been the most consistent forward on New Jersey since he arrived in 2015. He has over 20 goals in each of his five seasons with the club. Palmieri is a solid NHL veteran that the Devils will want to keep around as they progress through their rebuild. The downside for the Devils in re-signing him to an extension means that they will need to expose at least one of the younger forwards they have in their stables: Janne Kuokkanen, Yegor Sharangovich, or Nick Merkley.

There is a lot of dust that needs to settle in Nashville before we have a clear picture of who they protect. Nashville has a glut of decent forwards on their squad and they cannot protect them all. They will not be able to trade themselves out of exposing at least one of them. If Granlund re-signs, he will be a lock to be protected. Assuming these guys are on the team come July 17, when NHL teams must submit their protection list to the NHL, you can assume Filip Forsberg, Luke Kunin, and Viktor Arvidsson are also locks to be protected in the forward category. After that, the Predators will only be able to protect three of the following forwards: Calle Jarnkrok, Colton Sissons, Matt Duchene, Rocco Grimaldi, Ryan Johansen, and Yakov Trenin. Nashville is expected to be active before the trade deadline so we would expect a lot of this to change between now and the Expansion Draft.

The Blues are another team that will be in a bit of a bind for the Expansion Draft that will leave some quality middle-six forwards exposed. Locks to be protected are Jordan Kyrou, Robert Thomas, Ryan O’Reilly, Brayden Schenn, and Vladimir Tarasenko. Re-signing Schwartz will add him to the protected list and that means six of the seven slots are filled. That leaves only one spot for David Perron, Zach Sanford, Ivan Barbashev, or Oskar Sundqvist.

The Kings do not have a whole lot to offer in the Expansion Draft, but there are a couple forwards that could be intriguing should they remain with the team at the time of the draft. Iafallo will be protected if he signs an extension with the Kings. That would likely expose Dustin Brown and Andreas Athanasiou. Of course, if Iafallo walks to free agency and Dustin Brown is traded before the Expansion Draft, the Kraken will not have many options to choose from in LA.

A lot can change between now and July, but monitoring the trade deadline and the re-signing of some of these key players will help us forecast the protection lists for the Expansion Draft.