Analyzing when penalties are called in the NHL 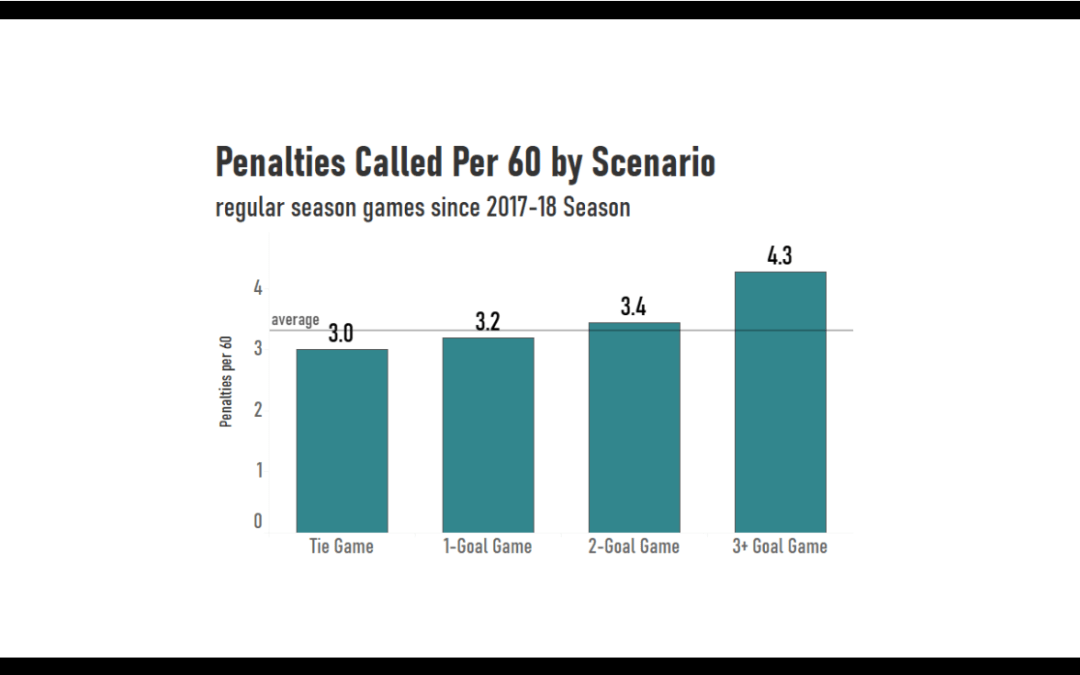 A big story earlier this week was the comment caught on a hot microphone by now former NHL referee, Tim Peel. The quote was, “It wasn’t much, but I wanted to get a #$&%*! penalty against Nashville early in the…”. An unfortunate comment but it confirms what a lot of fans have felt for a long time that NHL referees manage the game and call penalties accordingly. We commonly hear commentators say things like, “The refs are putting the whistle away” or “Looks like a make-up call,” etc. Depending on who you ask, you might find people that have no issue with that approach to the game. Others tend to argue that a penalty is a penalty whether it is the first minute of the game or the last minute of the game.

I am not advocating for how the game should be refereed in this post, I just want to look at the data to gather any insights on how and when penalties are called in a game.

Already this is a bit of a ‘tell’ on how penalties are called in the NHL. Of course, our analysis will not stop here so let us dig into this a bit.

It is worth exploring the third period a bit. Conventional wisdom says that referees tend to “put their whistles away” towards the end of a game. I chose to breakdown the period in five-minute increments and compare how penalties are called in the period.

…But that is not telling the whole story.

What we need is context of the penalties relative to the game situation. For this I use goal differential. However, we cannot simply look at how many penalties are called based on the goal differential in a game because the data would be inherently biased due the fact that games start in a tie and one-goal games are more common earlier in the game compared to two-or-more-goal differential games.

This agrees with the belief that referees tend to avoid calling penalties in tight games (either tied or one-goal games). Let’s go to another level of detail by looking at this spread by period.

Now if we just isolate the third period and we break the period into five-minute chunks, we see that the tie games in the last five minutes of the third period has the lowest rate of penalties called per 60.

There is still more work to be done here, but directionally it would appear that managing the game and putting away the whistle is common across the NHL relative to game differential based on this quick analysis.

I hope this gave you some insight into some of the narrative around the referees this week. If you have any questions or feedback feel free to drop me a note in the comments section or on Twitter. Thanks for reading.