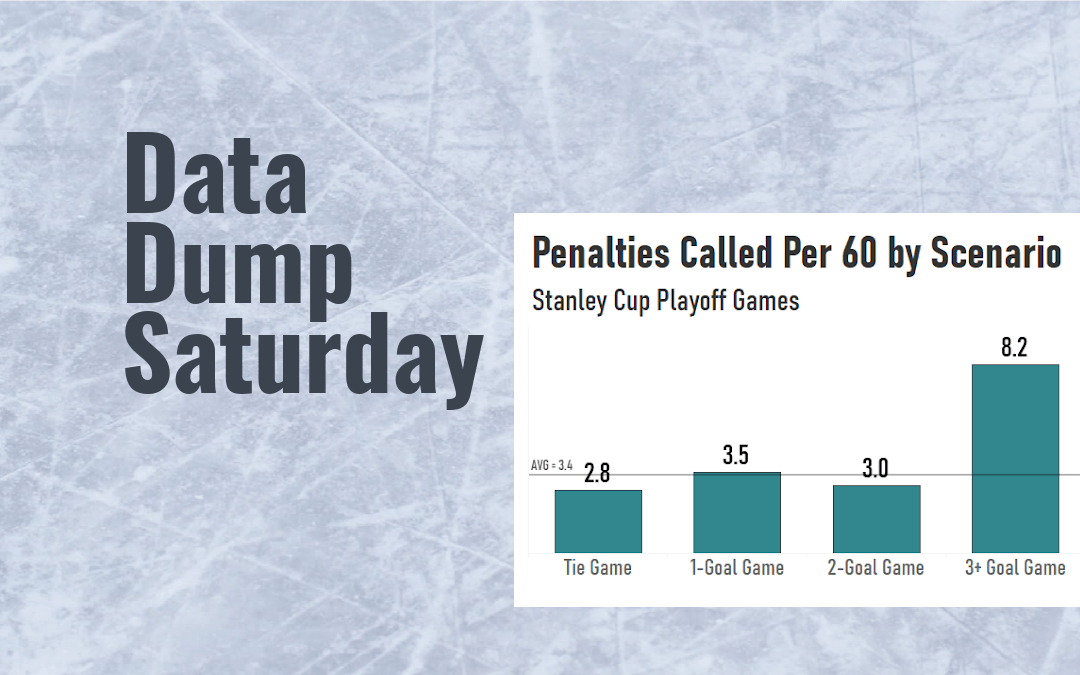 One of the points of discussion during the Stanley Cup Playoffs is the quality of officiating. We have heard from columnists, coaches, and plenty of fans complaining about the calls going against them this year. This is a common complaint every year.

A few months ago, I published a Data Dump piece on penalties that evaluated how often they were assessed in games and when they were most frequently called during the regular season. For this week’s Data Dump, I wanted to revisit that piece with a focus on comparing regular season penalties called to those called in playoff games.

I was a surprised to see that the rate of penalties called in playoff games is higher than regular-season games.

But whenever you look at data, it is important to add context to the figures. Like in my previous article, I used the goal differential to provide context to these penalties.

Penalties called where the goal differential is two goals or less seems rather consistent between regular season and playoffs. It is in the blowout game situation (goal differential of three or more) where things seem to get a bit out of hand. If you watch playoff hockey on a regular basis you can formulate why this happens, as teams tend to “send messages” or get frustrated and start committing penalties when the game becomes one-sided.

When we looked at the regular season trends a few months ago, there seemed to be some indicators that referees were more likely to call a penalty on teams that were leading a game versus trailing a game.

When we isolate the playoff games, there seems to be less variance between the penalties called on leading versus trailing teams.

The last two playoff seasons appear to have little to no difference in the number penalties called. Before we wrap this up and claim there is no bias in calling penalties if a team is leading versus trailing in the playoffs, let’s add some score differential context.

In the chart above, the difference between penalties called on the leading versus trailing team seems very consistent in the regular season, regardless of the goal differential. Let us look at the playoff games.

Penalties called in the third period

One of the most compelling visuals in the regular season post I did in March was the chart showing penalties called in the third period based on goal differential. Here is the updated visual with the breakdown.

One of the takeaways I see in the chart above is that the leading team seems more likely to be called for a penalty in the last five minutes of a one-goal game than any other time in the game. Now we can look at how this same data looks in the playoffs.

The large discrepancy of penalties in the playoffs in the last five minutes of a one-goal game between the leading and trailing team is no longer present. What jumps out at me in this chart is the spread in the two-goal game. In the first 10 minutes of the third period in a two-goal game, the leading team is much more likely to get a penalty called on them (about 61 percent) compared to the trailing team (about 39 percent).

Directionally, there are some interesting things in this analysis of penalties called in the regular season versus playoff games, but before we draw any hard-and-fast conclusions, here are a few other things to consider:

I hope this gives you a little deeper understanding of penalties called during the Stanley Cup Playoffs as opposed to just believing a coach’s remarks in a post-game press conference or a tweet you might have seen from a prominent journalist.