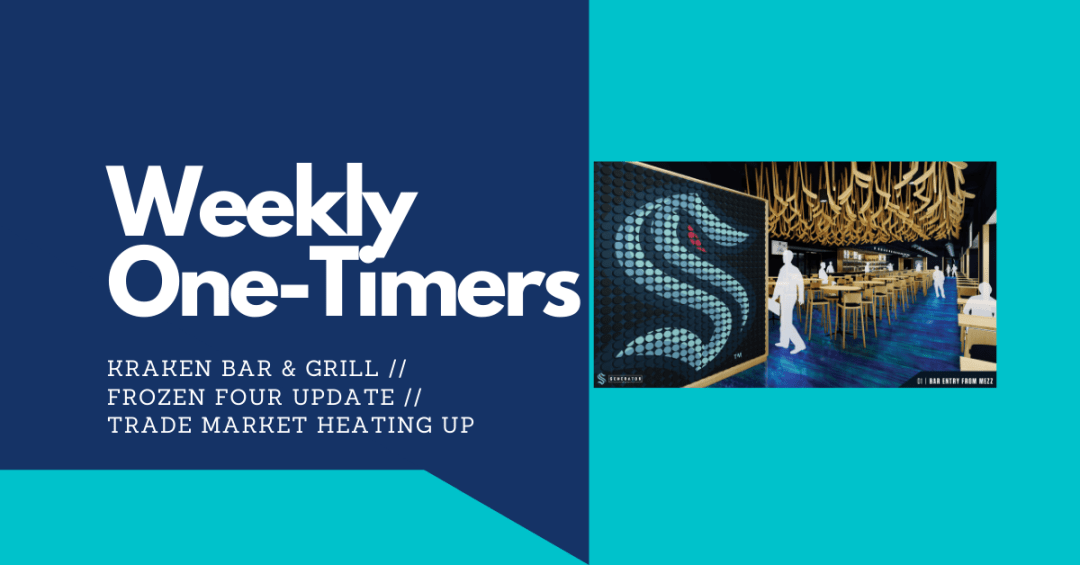 Seattle Kraken news has not been particularly groundbreaking of late, as we patiently await the next big story like a coach hiring or the team’s final payment to the league which could lead to the signing of the team’s first player. None of those items have come yet, but there were at least a couple tidbits this week, which we are of course happy to discuss here in Sound Of Hockey’s Weekly One-Timers.

Sure, a coach hiring or something of the like would be neat, but who doesn’t like bar/restaurant news?

It’s been no secret that there will be a restaurant and watering hole at the Seattle Kraken Training Center at Northgate, but more details were made public about those plans on Thursday.

The Kraken Bar & Grill will have a capacity of 300, will overlook rinks 1 and 2 at the facility, and will have a whopping 17 TVs plus a view of the 375-square-foot LED screen in rink 1. I don’t have a ton of relativity on that, but that sounds like a pretty big screen.

One can only imagine how rocking this place is going to be during Kraken games, especially road playoff games.

Mick McHugh — a famed restaurateur in Seattle best known for FX McRory’s — will head up the new Kraken-themed establishment.

“I count myself first as a loyal Seattle sports fan from the early days of the Sonics, through the Mariners, Seahawks and Sounders,” said McHugh via a press release. “It’s only right that now I can help welcome the Kraken to the city.”

“Rather than waiting for the next home game, Kraken fans can come to Kraken Bar & Grill and engage with their team every day of the week,” added McHugh. “From watching practices to just being in the home of the Kraken, this is going to be a great place for everyone to gather and share their love for the city and its teams.”

“I’ve sold monorails to Brockway, Ogdenville, and North Haverbrook and by gum it put them on the map!” – Lyle Lanley, The Simpsons, 1993

Transit to and from Climate Pledge Arena on game days has always been a concern. Traffic around that area is a nightmare in non-Covid times, and that is true without layering in hockey games attended by 17,000+ Kraken fans, many of whom will certainly prefer to drive to the venue.

But the Kraken have been creative in finding ways to combat this issue, like granting free public transit for ticket holders on gamedays. That transit access will include rides on the Seattle Monorail which began a $6.6 million renovation project this week.

Will this work in cutting down traffic around the Pledge? You’ll have to buy a ticket to find out.

As an aside, Climate Pledge Arena will have interactive art!

Whoa, boy! Thursday was a fun day of college hockey!

I know I’ve been laying it on a little thick around these parts with the college hockey talk of late, but I’m frankly glad that I have, because this NCAA Tournament has not disappointed. With the NHL still in the midst of its season but in a bit of a news lull, the NCAA somehow found the perfect weekend for its Frozen Four.

Will Hammer rifled home (I was going to say “hammered home,” but it felt too obvious) St. Cloud State’s third goal at 2:40 of the second period, giving the Huskies a two-goal lead over Minnesota State. At that moment, it felt like SCSU was about to bury Minnesota State and skate to an easy victory.

To the credit of the Mavericks, they battled back and made Thursday’s earlier semifinal an incredibly fun back-and-forth contest that ultimately did end with St. Cloud getting the win, but not without some awe-inspiring fireworks.

Mankato scored the next three goals, forcing St. Cloud to come back and tie it, which the Huskies did with 10 minutes remaining in the third.

Later, with the game appearing destined for overtime, Nolan Walker created some magic in front of the Mankato net with a perfectly angled stick blade and some top-notch hand-eye coordination.

It wouldn’t be a Minnesota Duluth game if it didn’t go to overtime. After the Bulldogs won the longest game in NCAA Tournament history last week, they came up short against UMass in the late game.

UMD had the better of the play throughout regulation, but somehow the Minutemen found just enough juice to tie the game at 2-2 at 8:25 of the third period.

The extra frame looked like a completely different game, though. After being outshot 36-15 in regulation, UMass dominated every second of the overtime period with a 13-2 advantage in shots. Garrett Wait ultimately found the winner at 14:30 of overtime when Bobby Trevigno’s wraparound attempt slid right through the blue paint and onto his stick on the backdoor.

Wait had a pretty beautiful quote in his post-game interview with ESPN’s Quint Kessenich. “We just ate some food in the locker room between periods, got our legs back, and we just focused on playing our game, getting pucks low and forechecking.”

They just ate some food. College kids, am I right?

A new champion will be crowned

The Huskies and the Minutemen will now meet in the NCAA Championship on Saturday at 4 p.m. Pacific on ESPN. Neither of these teams has ever won a national title before, so we will have a new king of college hockey crowned that day.

The NHL trade deadline is on Monday, so the associated wheeling and dealing is well underway around the league. In the past few days, we’ve seen Brett Connolly, Kyle Palmieri, Travis Zajac, Vinnie Hinostroza, and multiple guys named Lucas (Carlsson and Wallmark) get moved. TSN has a good tracker here.

Perhaps the biggest news on this front so far is that Palmieri was forced to shave his beard now that he plays for an organization led by Lou Lamoriello. Lou does not accept facial hair on his players. After all, this is hockey, and we can’t have these toothless animals looking like toothless animals out there.

Even Palmieri’s wife no longer recognizes him.

The Vancouver Canucks continue to deal with a Covid outbreak that has resulted in as many as 25 positive tests within the organization. NHL deputy commissioner Bill Daly expressed hope to ESPN’s Emily Kaplan that the team will be able to resume by the end of next week, but with the Canucks falling quickly out of playoff contention, there has been plenty of wondering whether their 56-game season will actually be completed.

Jack Campbell set a Toronto Maple Leafs record for most consecutive wins to start a season, bringing him to 10-0-0 on the year. He gave a pretty great interview after his latest victory as well.

Campbell has been outstanding in his opportunities, posting a 1.57 goals against average and .944 save percentage.

The Chicago Blackhawks’ affiliation with the AHL’s Rockford IceHogs was set to expire in 2022. But the partnership was fully solidified this week when the Blackhawks purchased the IceHogs from the City of Rockford for $11.8 million. The Blackhawks become the 21st NHL team to own its AHL affiliate.

Tanner Pearson re-signed with Vancouver for three years. We were trying to figure out if this means he will be protected from the Seattle Kraken Expansion Draft, and we think it probably means that.

Nikita Gusev was placed on unconditional waivers with the New Jersey Devils planning to terminate his contract. Chris Johnston of Sportsnet says Gusev hopes to sign with another team. Before moving over from the KHL, Gusev, 28, was once considered the best non-NHL player in the world.

Things obviously haven’t worked out as well as he had hoped in the NHL, but perhaps a new situation will do him some good.