How rosters can change before the Expansion Draft 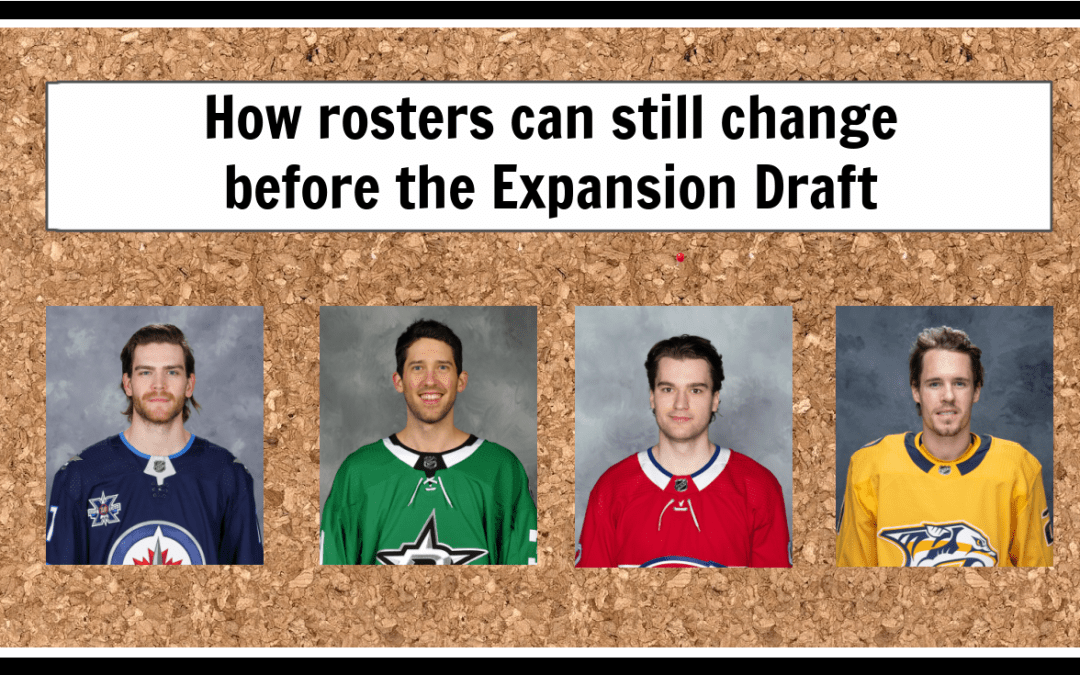 Last week’s trade deadline was an important milestone to settle the outlook for teams’ protected lists for the fast-approaching Seattle Kraken Expansion Draft on July 21. In addition to the 50 players that changed teams prior to the trade deadline, there were three contract extensions signed, as well as two waiver claims.

We do not have to look far for an example of this scenario. Late last week, Winnipeg signed Adam Lowry to a five-year contract extension that will undoubtedly signal that the Jets will be protecting him come July. This will then force a scenario where some other forward will be exposed to the Kraken.

Looking back at 2017 during the previous Expansion Draft, this scenario was not that common. Vladimír Sobotka would be the only UFA contract extension I could find where they signed him, then protected him in the Expansion Draft.

There are several pending UFAs of note, but a few of those are worth keeping an eye on for potential contract extensions: Taylor Hall (BOS), Ryan Nugent-Hopkins (EDM), Brandon Saad (COL), Dougie Hamilton (CAR), and Gabriel Landeskog (COL).

As a side note, there were several scenarios in 2017 where pending restricted free agents, or “RFAs”, had signed extensions with their existing team and then were protected. In most of these cases, these players would have been protected in the Expansion Draft, regardless of whether they had signed.

Tyler Toffoli, Jonathan Drouin, and Teuvo Teräväinen are all examples of RFA players that signed and were protected. (Click here for more info on RFA)

In 2017, Ben Bishop was on an expiring deal with the Los Angeles Kings. On May 9, Bishop was traded to the Dallas Stars for a fourth-round pick in the 2017 NHL Entry Draft. Dallas signed Bishop to a six-year deal on May 12 and protect him for the Expansion Draft in June.

Scott Darling went through a similar process when he was traded to Carolina on April 28, 2017, from the Chicago Blackhawks. Darling signed an extension on May 5 and then was protected in the Expansion Draft in June.

It is difficult to predict trades, but here are a few players we are keeping an eye on: Chris Driedger (FLA), Ryan Murray (NJD), and Antti Raanta (ARI).

Offseason trades are common before the NHL Entry Draft as teams attempt to bolster their draft position or strategically shake up their roster. Leading up to the 2017 Expansion Draft, several teams also made trades of protectable players.

On June 15, 2017, three days before the Expansion Draft protection lists were announced, the Tampa Bay Lightning traded forward Jonathan Drouin to the Montreal Canadiens for defenseman Mikhail Sergachev. Sergachev was exempt from the Expansion Draft, but Drouin was protected by the Canadiens.

On June 17, 2017, the Arizona Coyotes and Calgary Flames swapped goalies, with Chad Johnson headed to Arizona and Mike Smith headed to Calgary. Both goalies would be protected on their new teams.

Also on June 17, the San Jose Sharks traded former first-round pick Mirco Mueller to the New Jersey Devils for a few draft picks. Mueller was protected by New Jersey. If the trade had not been made, Mueller would have been exposed by San Jose.

In 2017 there were nine players that either signed an extension or were traded following the season that impacted their protection statuses in the 2017 NHL Expansion Draft. Those nine players would only be three percent of the total protected players across the 30 teams participating in the Expansion Draft.

That is not much, but it is something to keep an eye on since it could impact a couple players that look like leading candidates to be selected by the Seattle Kraken come July.