How the NHL Trade Deadline affected the Seattle Kraken 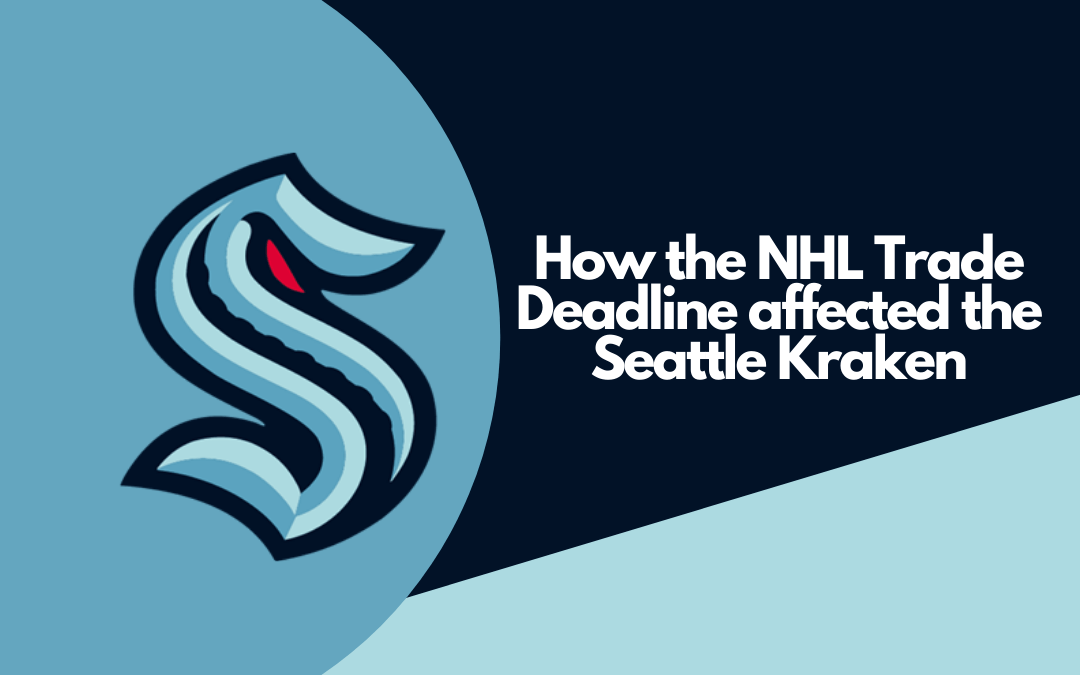 Funny enough, the Seattle Kraken had their tentacles all over the come-and-gone NHL Trade Deadline.

Sure, there were the lets-go-win-a-Cup type trades, like Taylor Hall to Boston and Nick Foligno to Toronto, but there were also plenty of deals with a sprinkle — or in some cases a downpour — of Expansion Draft considerations.

Here’s how all the wheeling and dealing in the preceding days and on the day of Monday’s noon PT deadline may have impacted the Seattle Kraken in the Expansion Draft.

The Ducks, despite sitting at the bottom of the standings, added some intriguing pieces rather than fully selling.

Fleury is a player many circled as a candidate for Seattle from Carolina, and his move to Anaheim might land him on the Ducks’ protected list. He may knock off someone like Kevin Shattenkirk, who may not be as intriguing as young defensemen Josh Mahura or Brendan Guhle.

Volkov, who was almost certainly going to be protected by Tampa Bay, might wiggle his way onto the Ducks’ Expansion list, too.

Overall, the Ducks’ pair of moves limited some of the options for Seattle — at least on the surface.

Despite taking a big swing at acquiring Hall, the pending unrestricted free agent likely won’t be protected — unless the Bruins sign him to a contract extension, which seems unlikely.

Losing Hall and Staal won’t impact the Sabres too much, considering both were set to be unrestricted free agents this summer and didn’t figure much into expansion. Montour was a player we identified as being an intriguing option in the Expansion Draft, but he’s no longer an option.

Losing Fluery as an option stings, but there’s still plenty of intriguing options in Carolina.

The Flames’ fractured relationship with Bennett meant he wasn’t going to ever be protected, so the Kraken lose that “take-a-gamble-on-a-first-round-pedigree” option — Bennett still should be available, only on a team with more exciting choices in Florida.

Maybe Mark Giordano is destined to don a Seattle jersey after all?

The Blackhawks made a flurry of deals along the perimeters of their roster, where there are a few interesting developments.

Carlsson is someone we identified as being a young option for Seattle, so he probably isn’t in the mix anymore. But Stillman, who we had on our watch list for Florida, fills that void quite nicely.

Wallmark was projected for protection by Sound Of Hockey. It’s likely Gaudette, who has seen his struggles in Vancouver but still harbors plenty of upside, Borgstrom, or Connolly replaces him.

Chicago’s flurry of moves is a win for Seattle because there are now far more intriguing (and young) options than there were before.

The Avalanche’s acquisitions of a veteran forward in Soderberg and a backup goalie in Dubnyk won’t shake the Expansion Draft tree.

The Blue Jackets made some huge organizational moves, acquiring a load of draft picks for their team captain and a top-four defenseman. But both Foligno and Savard were pending free agents and weren’t going to factor into the Expansion Draft, anyway.

The Red Wings executed one of the most impressive pieces of business at the deadline in flipping Mantha for Vrana, Panik, and picks. Vrana will undoubtedly take Mantha’s spot on the Red Wings’ protected list, while Panik will probably be available for selection, though the 30-year-old winger hasn’t been all that productive this year, anyway.

The Panthers were plenty busy at the deadline, acquiring some depth pieces to complement a dangerous core, but it will be hard for any of the quartet to move someone off Florida’s projected protected list. All four, who were potential Expansion Draft targets on their previous teams, remain so with Florida; the only issue is that Seattle only has one selection via Florida.

It’s possible Bennett replaces Connolly on Florida’s protected list, but at the moment, players like Alexander Wennberg, Carter Verhaeghe, or Mason Marchment hold the inside track until we see Bennett’s fit with the Panthers.

Brendan Lemieux is the player to note here. The 25-year-old was one of our targeted options for the Rangers and he’s very much in the mix for protection for the Kings. Someone like Austin Wagner, Blake Lizotte, or Carl Grundstrom may be bumped off if Lemieux jells with the Kings.

Although Carter is a big name, he carries little-to-no Expansion Draft significance at this point.

Wolanin was on Ottawa’s watch list, but it’s hard to know how he stacks up with the Kings’ list of potential targets right now.

Also of note, the Kings signed Alex Iafallo to a contract extension on Monday, all but ensuring his protection in the Expansion Draft.

Staal, Merrill, and Gustafsson are all nice pieces, but likely won’t figure into the Canadiens’ Expansion Draft picture.

Anyway, it’s Jake Allen or bust in Montreal — hop on the train before it’s too late!

Nashville’s trade deadlines actions aren’t as much highlighted by what it did do, but rather what it didn’t do.

Gudbranson is an intriguing pickup for Nashville, but he likely won’t affect the Predators’ protected list because Nashville already boasts a strong and deep defensive corp.

Mattias Ekholm was a popular name as the deadline approached, but he wasn’t dealt. Nor were Erik Haula or Mikael Granlund, who are also UFAs after this season.

In fact, Predators’ general manager David Poile may have tipped his hand at the Predators’ approach to the Seattle Expansion Draft.

With Ryan Ellis, Roman Josi, and Dante Fabbro all worthy of expansion protection, it would be shocking if the Predators didn’t go with a 4-4-1 approach.

Trading Palmieri answered one question about New Jersey, because we wondered if the Devils would re-sign the pending unrestricted free agent to a contract extension and protect him. One of Janne Kuokkanen, Miles Wood, or Yegor Sharangovich likely takes his spot.

Siegenthaler is an interesting pickup. PK Subban and his lofty contract always made him a candidate for exposure, and Siegenthaler, 23, could take his spot — as could Will Butcher, who has returned to regular action after starting the season mostly as a healthy scratch.

The Devils’ defensive corp is something to keep an eye on moving forward.

With plenty of forwards worthy of protection and not a lot of cap space, it’s hard to see Palmieri on the Islanders’ protection list. Veterans Zajac and Coburn won’t figure into protection, either.

Lemieux was likely unprotected in New York and his departure leaves one less option in a pretty uninspiring list of targets.

Reilly was likely going to be protected by Ottawa, and Wolanin’s departure means that someone like Josh Brown likely fills his spot on the protection list.

Raffl and Gustafsson don’t carry much Expansion Draft significance, but the Flyers signed forward Scott Laughton to a contract extension on Monday, meaning he could knock someone like Nicholas Aube-Kubel off their protected list.

San Jose was the third team brokering many deadline deals and didn’t make any very impactful additions or subtractions, other than trading a goalie away and acquiring a young forward in Barabanov that’s not eligible for selection in the Expansion Draft.

As discussed above in the Anaheim section, Volkov is no longer an option in Tampa Bay’s pool of potential targets — which is already very strong.

While Savard is a nice addition to Tampa’s defensive group, the UFA won’t figure into their protected list.

Toronto was keen on adding a load of depth for what it hopes to be a long playoff run, but none of the players they nabbed at the deadline will figure into the Expansion Draft.

After Vancouver inked Tanner Pearson to a three-year deal on April 8, it appeared Gaudette’s spot on the Canucks’ protected list could be numbered. Vancouver confirmed that by trading him to Chicago.

Also of note, the Canucks’ addition of Bowey provided the defenseman for exposure that’s required under the Expansion Draft rules — prior to Bowey’s arrival, the Canucks only possessed three that fit that criteria and needed at least four.

The Capitals’ will fill in Vrana’s spot on their protected list with Mantha, but we had Panik listed as protected as well. Now that he’s gone, it’s possible the Capitals will keep Ovechkin protected — we outlined a wink-wink type of deal that would behoove both parties a few months back — or add TJ Oshie, whose big contract is an underlying issue for the cap-strapped Caps.

We also had Siegenthaler listed for protection. He’s likely replaced by Brendan Dillon, who signed a rather large contract extension with Washington in the offseason.

The Capitals still seem ripe for a side deal.

*The Edmonton Oilers, Pittsburgh Penguins, and Winnipeg Jets made trades that carried no significance to the Seattle Expansion Draft.

*The Vegas Golden Knights are exempt from the Seattle Expansion Draft.

Sound Of Hockey will have additional versions of the Mock Seattle Kraken Expansion Draft in the coming weeks, so be sure to check back regularly!