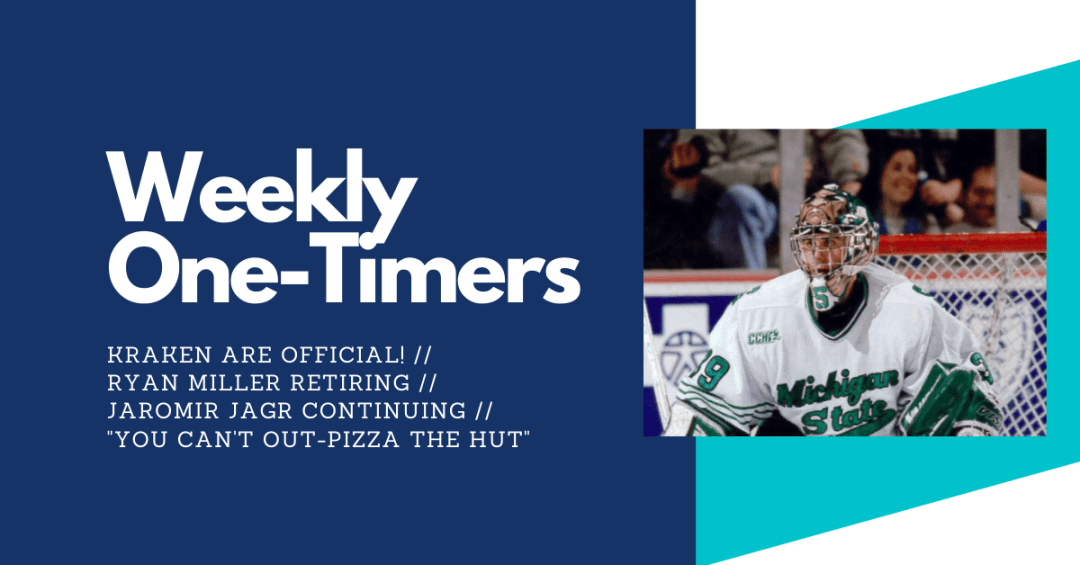 April 30, 2021, is a day that will live on in the hearts and minds of hockey fans in the Pacific Northwest. Yes, the Seattle Kraken have made the final payment of their $650 million expansion fee to the league on Friday, meaning they are now officially the NHL’s 32nd franchise.

Clearing this final hurdle allows the team to sign free agent players and contribute to any league-wide decisions moving forward.

Of course, we have long known that this day would come, but now that it has arrived, it is a nice bit of closure for anyone who still had questions bouncing around deep in their brains about whether or not this thing would ever officially get off the ground. Well, ladies and gentlemen, it is off the ground.

The team officially joining the league is certainly the biggest piece of news to come from the Kraken this week.

The only other item of interest is a follow-up from last week’s $3.5 million lawsuit, filed by the Kraken Bar & Lounge against the team for its planned restaurant at the new Northgate training facility. The update is that the team will no longer use the name “Kraken Bar & Grill” for the establishment that it is planning to open in the fall.

At this stage, it is unclear what the name of the team’s restaurant will end up being, but it won’t be Kraken Bar & Grill anymore.

The Kraken Bar & Lounge, a punk rock bar in the University District, may have a point because the names of the establishments would have been quite similar, and frankly, those two businesses aren’t even all that far apart in physical distance from one another. So, it certainly would have been confusing for patrons seeking punk.

Perhaps the name change lets the team avoid a battle in court, but the situation does still beg the question, is legal action really all that punk rock?

The “other” NHL TV deal

This week, the NHL announced that its second national TV partner will be Turner Sports, which means that in addition to ESPN, hockey fans will be able to watch games nationally on TNT and TBS starting next season.

Per the NHL’s press release, Gary Bettman says of Turner, “They put a fun and innovative factor into all of what they do and we’re excited to have that same treatment for our sport and for our fans.” He also mentions his excitement for Turner’s digital properties, which includes HBO Max and Bleacher Report. There will apparently be a streaming aspect to this deal, though the bulk of out-of-market games will be moving from NHL.tv to ESPN+.

The deal is worth $225 million annually for seven years.

NBC has done some good things in its 16 years as the NHL’s flagship national TV partner, but that network’s coverage has run its course. We at SOH are thrilled to see what fresh perspectives can be brought by both ESPN and TNT/TBS as the game moves into the future.

Of course, we should note that TNT—known for its outstanding and fun coverage of the NBA—did slightly miss the mark this week when Shaquille O’Neal was asked to name three hockey teams while a graphic featuring the retired Andrew Ference (it clearly was meant to be Connor McDavid) appeared on the screen.

Not to be too hard on the Big Aristotle—who did not claim to have any hockey knowledge when asked—but the California Kings?! When he played for the Lakers, he literally shared an arena with the Kings.

The coverage can only get better from here, gang!

The NWHL doubles its salary cap for 2021-22 season

The league champion Boston Pride had 21 players on their roster for this past season. $300K divided up 21 ways is still not bringing these women even close to the neighborhood of what NHL players make, and they clearly still deserve WAY more considering the elite level at which they compete.

But every little step towards equitability is a positive step for the women’s game, and this is definitely a positive step. It also comes in the wake of several other positive steps from the past year.

…The Gagarin Cup, that is.

Avangard—which has been playing its games 2,500 kilometers away from its home arena due to structural issues with its regular venue—earns its first championship since 2004, back when the league was called the Russian Superliga.

The Hawks are coached by Bob Hartley, who previously coached Kovulchuk with the Atlanta Thrashers at the beginning of the rising superstar’s professional career. Hartley also coached the Colorado Avalanche, where he won a Stanley Cup, as well as the Calgary Flames before going to Russia.

Hartley always had an exceptional hairline, and at 60 years old, it appears to still be holding relatively strong.

Other former NHL players on Avangard’s roster include Alexei Emelin (who did not play, as he is recovering from liver failure… Yikes!), Nail Yakupov, and Reid Boucher.

The winningest U.S.-born goalie in NHL history, Ryan Miller, has announced that he will hang up the pads after this 2020-21 season.

The Hobey Baker winner, Olympic MVP, NHL All-Star, and 18-year veteran holds a career record of 390-289-87, with a 2.64 goals against average and .914 save percentage. Miller, 40, played the first 11 seasons of his NHL career in Buffalo, where he rose to stardom. He then made stops in St. Louis and Vancouver before settling in Anaheim, where he has spent four seasons.

A personal anecdote for you. When Miller was playing in the CCHA for Michigan State University and solidifying himself as the best college netminder ever, he wore a pretty awesome Sparty Spartan mask. I liked it so much, I designed my own high school mask with the exact same theme, but swapping in Sparky, my high school’s mascot.

I’m a huge fan of Miller, and while the time is certainly right for him to ride off into the sunset, he will very much be missed.

Contrary to Miller’s plans, Jaromir Jagr, 49, has no interest in ending his pro career after completing his 33rd season. Jagr both plays for and owns Rytiri Kladno in the Czech Republic. Kladno just won the second-tier Chance Liga championship, which means that it will be promoted to the Czech Extraliga next season. In deciding to continue, Jagr cites his responsibility to the club and was quoted on NHL.com, saying, “I expect much more from myself and I don’t have it. But I am aware that when I leave, many (business) partners will leave the team too. That’s why I have no choice.” So, in that sense… it’s actually… kind of… a sad story that Jagr is still playing pro hockey as he approaches 50 years old?

The date for the NHL Draft Lottery is set for June 2. Now that the Kraken are officially an NHL franchise, they will officially have a ping pong ball in that hopper (this was never really a question, but it feels neat to type that). Seattle has the third-best odds of landing the top overall pick at the NHL Entry Draft, which will be held on July 23 and 24.

Who knew double Sam’s was such a rarity?

Morgan Geekie, who is likely on the Kraken’s Expansion Draft radar, has the perfect way to describe the Carolina Hurricanes’ methods for moving on after a tough loss.

Truer words have never been spoken.