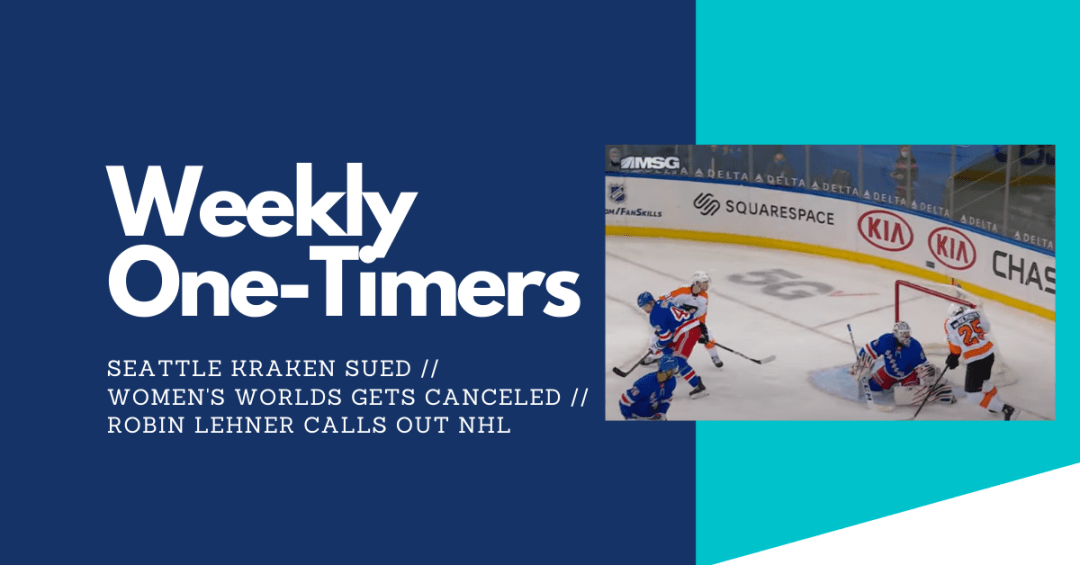 Oh, hello! I didn’t see you there. Do you come here often? I do. Every week, in fact. That’s why it’s called “Weekly One-Timers” and not “Occasional One-Timers.”

As is the case seemingly every week, we have plenty to chat about, and it’s another beautiful Friday in the Emerald City, so let’s be sure to enjoy our time together.

Last week was slightly more active than most for Seattle, but we were back to things being pretty quiet on the Kraken front this week.

The team is being sued by the Kraken Bar & Lounge, a punk rock bar in the University District, for $3.5 million, as first reported by Geoff Baker of the Seattle Times. The lawsuit states that the team’s name and new Kraken Bar & Grill, expected to open at the Kraken Training Center at Northgate in the fall, will harm the existing bar’s brand.

Friend of the Sound Of Hockey Podcast, Everett Fitzhugh, released his second installment of “Sightseaing with Fitz,” which is absolutely worth the price of admission.

Also, Kraken fans will likely have to wait just a little longer for opening night, as the start date for the 2021-22 season appears to be getting shoved back a bit.

BREAKING: A few seats have been installed at Climate Pledge Arena!

It has been a really tough year in a lot of ways for women’s hockey. Yet another blow was sustained on Wednesday when the IIHF Women’s World Championship was canceled for the second consecutive year. The tournament was slated to be played in Nova Scotia May 6 through 16, but provincial Premier Iain Rankin made the decision this week that the tournament should not go on, citing Covid-19 variants and rising case numbers.

There is still hope that a tournament can be played later in the summer, but even so, it’s another damaging development. Adding insult to injury, the Men’s Under-18 World Championship starts April 26 in Texas, and if we were a betting website (which we are not), we would bet that that tournament is going to be played out in its entirety.

Robin Lehner calls out the NHL

Vegas Golden Knights netminder Robin Lehner—always outspoken on mental-health-related issues—claimed this week that the NHL lied to players about how it would proceed once players and team employees received their Covid vaccines.

In an impassioned press conference, he inferred that players, coaches, and staff were expecting to see their restrictions loosened a bit for the betterment of their lifestyles and mental health, but that has not happened. Instead, he says they won’t change the rules until all the teams in the league have the same opportunity to get the vaccine to eliminate competitive advantages.

Lehner’s comments on the topic begin around the five-minute mark of the below video.

I’m all for taking every precaution against Covid, but if what he’s saying is true (it has been disputed by the league), then he has a very good point here.

I’ve always admired Lehner’s willingness to speak publicly on the societal topics about which he is most impassioned and would love to see more NHL players use their platforms in this way.

Spencer Knight made his NHL debut with the Florida Panthers this week and looked great in a 5-1 win over the Columbus Blue Jackets, making 34 of 35 saves. The 20-year-old World Junior Championship hero was playing for Boston College in the NCAA Tournament just a couple weeks ago, so his quick ascension into an NHL start was a bit surprising. Knight is a highly touted prospect, selected No. 13 overall at the 2019 NHL Entry Draft. In his debut, Knight was wearing the same pads, glove, and blocker that he wore for the WJC along with his BC Eagles mask. Let’s get the guy some fresh gear, eh? I wrote about Knight way back in the NHLtoSeattle days of yore. They grow up so fast.

In that game between the Panthers and the Blue Jackets, Columbus coach John Tortorella healthy scratched Max Domi for the second consecutive game. Domi hasn’t had a great season by any stretch of the imagination, but it really is fascinating how Tortorella uses healthy scratches and benchings on his star players to try to get their attention. Domi—acquired in a trade with the Canadiens in October—returned to action on Thursday and registered 15:48 of ice time. The last-place Blue Jackets have also now been officially eliminated from playoff contention, so one has to wonder about the future of Torts in Columbus.

Patrick Marleau’s record-setting 1,768th NHL game received plenty of attention this week, including on Sound Of Hockey, so we don’t really need to talk about that here. But we do want to make sure you saw this great congratulatory video from the Toronto Maple Leafs.

You don’t see that every day [low whistle].

Save of the year?

Braden Holtby may have earned his way back into contention for being selected in the Seattle Kraken Expansion Draft with just one save.