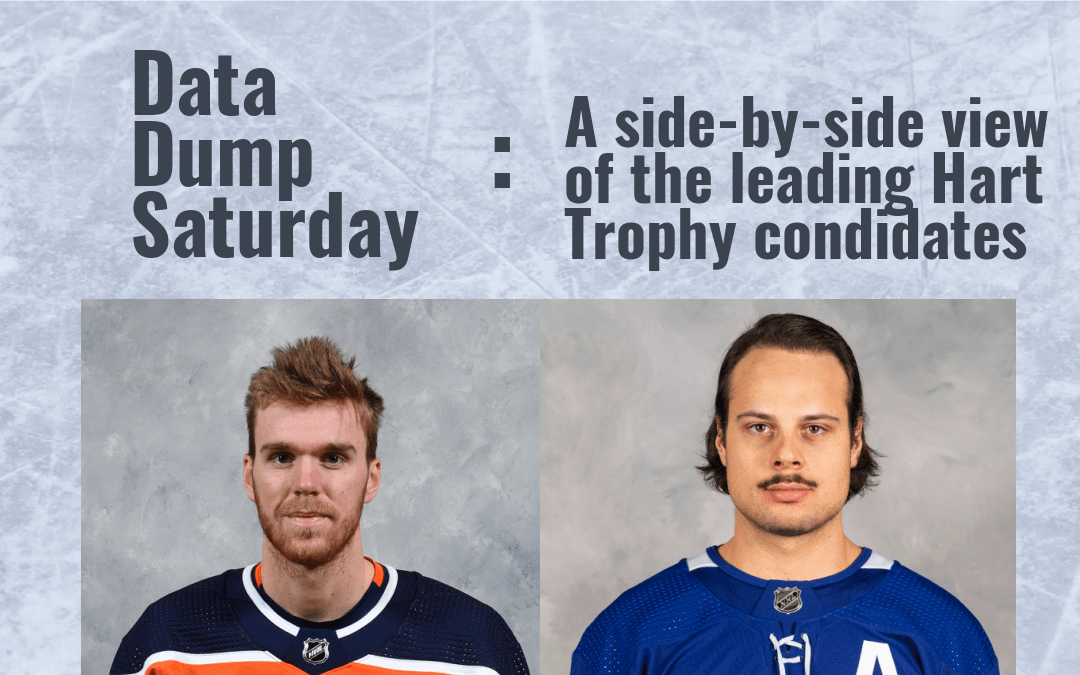 There has been a lot of talk about the battle for the Hart Trophy, awarded to the NHL’s MVP, between Auston Matthews (TOR) and Connor McDavid (EDM). For this week’s Data Dump Saturday, I want to dig into the numbers between these two players to demonstrate the thought process when evaluating who is truly the best.

Points, goals, and assists are the most basic level of statistics when evaluating a player so let us start there to establish a baseline for comparison.

Next, let’s consider the number of games played. As of now, Toronto has played 50 games while Edmonton has played 48. Matthews also missed four games due to injury so we should consider average points, goals, and assists per game to make it a more level playing field.

There is no material change, but averages are better for comparing players with a different number of games played.

Now let us peek at what teams these players are feasting on this season.

Both players are taking advantage of the Ottawa Senators, averaging two points or more per game. Additionally, McDavid must love facing the Winnipeg Jets, while Matthews does pretty well against Montreal. These matchups might be worth noting because coincidentally the first-round Stanley Cup Playoff matchups appear to be Toronto versus Montreal and Edmonton versus Winnipeg.

Any goals are valuable, but there are certain scenarios where it is easier to score goals, like on the power play. To even this out let us look at the point production without the power play points.

This starts to level out the scoring, but McDavid still leads Matthews in points when we just isolate even strength points.

Another way we can add context to the point production of these two players is by looking at what period of the game they are scoring their points.

One may think that scoring more at the end of the game could be considered more meaningful. As such, one might think that McDavid is more clutch by scoring more points late in the game, right? Not necessarily. We are missing context. What if Toronto tends to enter the third with a bigger lead than Edmonton does in its games? If Toronto establishes a lead in a game early then this would enable them to play a more defensive-minded game later, thereby limiting the opportunity for Matthews to score. I do not know if this is the case, but these are contextual questions that might be asked when evaluating players.

To do this, I am going to show the goal differential after the player scores. For example, if the Toronto Maple Leafs are down 3-1 and Auston Matthews scores a goal to bring the score to 3-2, the goal differential is -1. It would be considered a more meaningful goal than if Matthews were to score when the game is 5-0.

Assuming you believe the smaller the goal differential at the time the goal is scored, the more meaningful the goal, Auston Matthews scores more meaningful goals. 58% of his goals tie the game up or put his team up by one goal compared to 50% of McDavid’s goals.

My intent of this week’s data dump is just to showcase the thought process in evaluating players and their commonly reported stats. Context is very important to evaluate players and will be very important for the Seattle Kraken when considering who to select for the Expansion Draft and beyond. I hope this sheds a bit of light on the topic and would love to hear any ideas or thoughts on how you would evaluate players in the Expansion Draft.