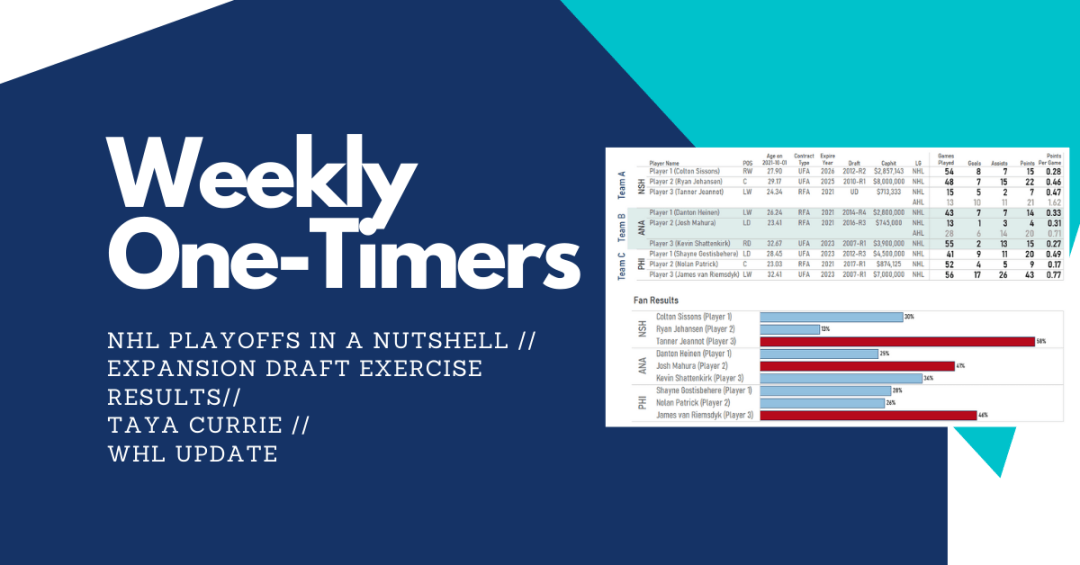 It turns out the NHL Stanley Cup Playoffs really are exciting after all! Who knew?! What a wild week it has been in the NHL, as all four second-round series of the Stanley Cup Playoffs were put to rest without a single Game 7 being reached. While it was a bit disappointing that there wasn’t a Game 7 this time, the second round did not lack excitement or intensity.

The Montreal Canadiens continued their shocking run with a sweep of the Jets and are now set to become the first Canadian (Canadien?) team to cross the border into the United States since the pandemic started.

Montreal is now officially Canada’s team for the foreseeable future, much to the chagrin of… well… all of Toronto.

Remember when Mike Milbury called that thing the Space Needle?

The Tampa Bay Lightning continue to defend their crown while playing fast and loose with the salary cap, which no longer exists during the NHL Stanley Cup Playoffs. Carolina’s Dougie Hamilton isn’t thrilled about the brilliant finagling that the Bolts have done, complaining to the media on Thursday, “We lost to a team that’s $18 million over the cap.” Sure, Dougie, but those are the rules, and with the Lightning being that far over the cap currently, they will be absolutely screwed for the Expansion Draft, so we Seattleites are just fine with it.

The hockey world continues to sleep on the New York Islanders year in and year out. People seem to forget that they reached the Conference Finals last season and are still coached by Barry Trotz, a darn good coach, and managed by Lou Lamoriello, a darn good manager.

People are over the moon for this team on Long Island, and even co-owner Jon Ledecky is getting in on the fun.

In retrospect, Bruce Cassidy referring to the Islanders as the “New York Saints” after Game 5 was a huge mistake because it seemed to galvanize this team and its fanbase even more, and it cost Cassidy $25,000 in fines.

And we can’t forget the Vegas Golden Knights who closed out Colorado in impressive style on Thursday, capping yet another disappointing postseason for the usually electrifying Avalanche. Maybe the Avs were just thinking too much?

After getting sued for initially naming the restaurant at the Kraken Training Center the Kraken Bar & Grill, the Seattle Kraken have announced a new name for the establishment. The 32 Bar & Grill does have a nice ring to it, and frankly I like this better than “Kraken Bar & Grill.”

As my beer league team and I were standing in the parking lot of Lynnwood Arena drinking a couple pops after a late-night game earlier this week, we were discussing how great it will be to have an actual on-site bar to go into following those tough contests in the future.

We’re definitely pumped to have a few naughty waters at this place!

Sound Of Hockey’s own John Barr put together a fun exercise earlier this week, a “Would You Rather” for a few teams that will be participating in the Seattle Kraken Expansion Draft. In that exercise, John gave a choice of three players from each of the three teams and shared some basic information about them. The catch was that he withheld the players’ names and asked fans to tell us who they would select in the Seattle Kraken Expansion Draft based solely on the information provided.

We had a huge response from readers, which was awesome to see. Thank you to all who participated.

Here are the results and the revelation of who the players were.

I’ll be honest, there are more Tanner Jeannot stans reading Sound Of Hockey than I realized.

The Blue Jackets have promoted from within to fill the vacancy left by former head coach John Tortorella. After seven seasons as an assistant, Brad Larsen, 43, becomes the eighth head coach in franchise history.

Some familiar faces from around the Seattle metropolitan area will be back in the WHL next season, but with teams north of the border. Former Everett general manager Garry Davidson was named Director of Player Personnel for the Calgary Hitmen after nine seasons at the helm of the Silvertips. It had been announced in May that Davidson would not be returning to Everett in what turned out to be a cost-cutting move.

Meanwhile, friend of the Sound Of Hockey Podcast Steve Konowalchuk has been hired as the head coach of the Red Deer Rebels. Konowalchuk coached the Seattle Thunderbirds from 2011-2017 and led the T-Birds to a WHL championship in 2016-17.

Also, ho hum, Silvertips netminder Dustin Wolf won another major award, the Del Wilson Memorial Trophy as the WHL goalie of the year. This is the second time Wolf has won this prestigious prize, and it was well deserved after the Calgary Flames prospect posted a record of 18-3-0 with a 1.80 goals against average and .940 save percentage.

Taya Currie, a 16-year-old netminder, made history this week by becoming the first female ever drafted to the OHL. Selected in the fourteenth round by the Sarnia Sting, Currie now has an opportunity to follow in the footsteps of the legendary Manon Rheaume, who broke the gender barrier in both the QMJHL and the NHL, and Shannon Szabados, who once had a brief stint with the Tri-City Americans in the WHL.

Finalists for the biggest individual NHL awards were announced this week. Connor McDavid, Nathan MacKinnon, and Auston Matthews make up the field for the Hart Trophy. Andrei Vasilevskiy, Marc-Andre Fleury, and Philipp Grubauer are in the running for the Vezina Trophy, while Adam Fox, Victor Hedman, and Cale Makar are the finalists for the Norris Trophy. The full list of awards finalists can be found here.

This has quickly become one of my favorite GIFs of all time: